Is it an apple or a banana? Well, if you look at this slip-up, it’s clear that CNN definitely stepped on a banana.

Remember kiddies, CNN says that they are all about ‘Facts First’.

Ben Wedeman, CNN’s Senior International Correspondent based in Beruit, fell for an incredibly obvious photoshop of a Tunisian holding a chainsaw being hoisted into the air during a protest of the Saudi Arabian Crown Prince.

The photo didn’t look at all legitimate with the chainsaw balanced precariously on the open hand of the protester as he was being lifted by other protesters. 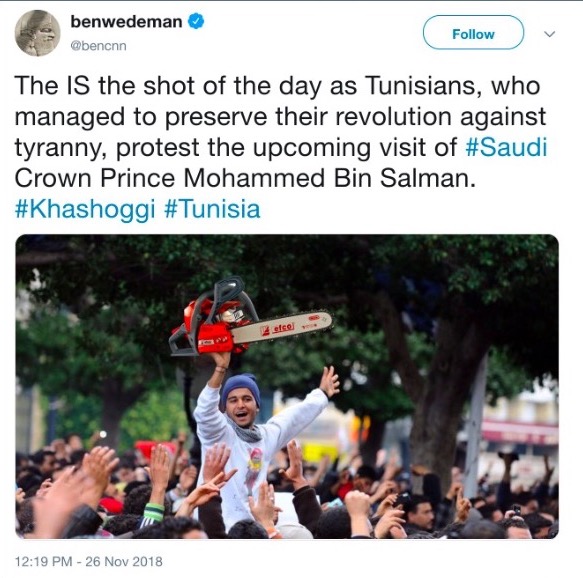 Nevertheless, Jim Sciutto, CNN anchor and National Security Correspondent, was totally blown away by it and retweeted it. 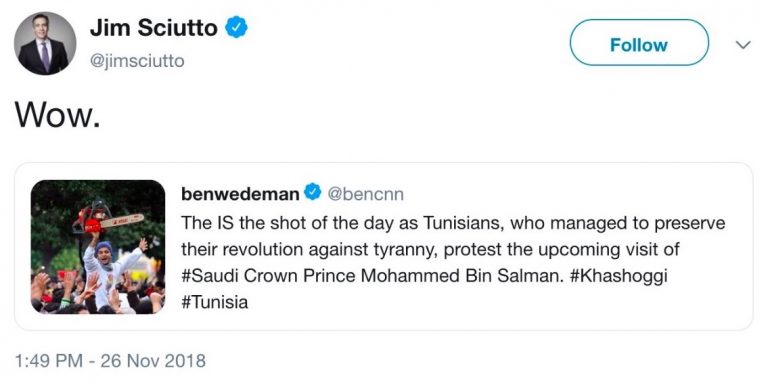 The Media (D) has been critical of President Trump for not condemning Saudi Arabia after the murder of Saudi national Jamal Khashoggi at the Saudi Embassy in Istanbul. Khashoggi wrote occassional opinion pieces for the Washington Post, and also was sympathetic to the Muslim Brotherhood, a terrorist organization. Yet, he’s being hailed as a martyr by the Media (D) and suddenly they’re all anti-Saudi. Interesting that this coincides with President Trump’s lucrative deal with the Saudi government, and, despite the horribly bungled, and completely inappropriate murder of Khashoggi, the beginning of freedoms being introduced into restrictive Islamic kingdom.

Members of the Media (D) have been lambasting Trump for not ending our relationship with a key Middle East ally after the White House released a statement from the President stating that the relationship is too valuable to be destroyed over the death of one man, however inappropriate it was.

Also note that the Media (D) defended Obama for his Iran deal which turned a blind eye to (while simultaneously propping up) the largest state sponsor of terrorism in the world.

So, spare me the ‘moral’ outrage.

The Media (D) is desperate to make the Saudi regime look bad, which means they’re totes kewl with spreading images of protests and ‘freedom fighters’ against the current regime and the Crown Prince, Mohammed Bin Salman. In one instance, Reuters fell for a story and reported that the Saudi consul in Istanbul was fired and under investigation relating to the Khashoggi murder, but they had to pull the story and issue a retraction because it was based on a fake news website that modeled itself after Saudi Arabia’s online neswspaper, Sabq.

Sciutto and Wedeman got called out for spreading ‘fake news’. 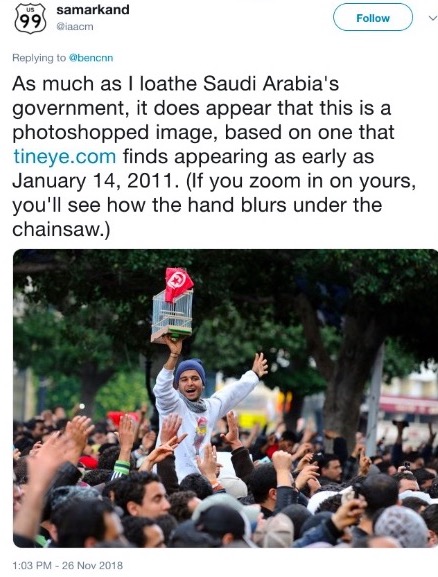 Hey guys, I found one of those mass spreads of misinformation you're always talking about. @brianstelter @oliverdarcy pic.twitter.com/TxdPD7xfya

Both Wedeman and Sciutto have deleted their tweets.

Of course, not only are a couple of CNN hacks embarrassed, but we got some great photoshops out of the blunder.

Wait, I thought this was the original photo. ???? pic.twitter.com/j14r0oGqLg

The IS the shot of the day as Tunisians, who managed to preserve their revolution against tyranny, protest the upcoming visit of #Saudi Crown Prince Mohammed Bin Salman. #Khashoggi #Tunisia pic.twitter.com/ix93Rrm1Z6

And of course, the epic AR-15 schematic:

This guy has a problem:

They love #PBJ, too. pic.twitter.com/Gnf39X9rGJ

This isn’t going to help their reputation with conservatives that don’t trust the mainstream Media (D).

We need to fight that, and you can help.

Facebook has unpublished ClashDaily’s page, your best bet to keep in the loop is to Subscribe to our ClashDaily Newsletter right here: