Rather than realizing he’s pushed too hard with CNN’s hatred of all things Trump and conservative, he’s charging ahead with it.

(This from the guy who once asked with a straight face whether a Black Hole might have swallowed that missing airliner.)

Here was the key phrase that he caught hell for:

‘We have to stop demonizing people and realize that the biggest terror threat in this country is white men, most of them radicalized to the right, and we have to start doing something about them,’ Lemon said.

Surprising almost nobody, the CNN personality still had more demonizing to do.

Lemon was again speaking about right-wing extremist threats on Wednesday’s show when he acknowledged the anger and criticism he has received over his initial statement.

‘I made some comments about that in a conversation with Chris. I said that the biggest terror threat in this country comes from radicals on the far right, primarily white men. That angered some people,’ he said.

‘But let’s put emotion aside and look at the cold hard facts. The evidence is overwhelming. A recent report from the Government Accountability Office shows that.

‘Even though more people died in attacks connected to Islamic extremists, the vast majority of deadly attacks in this country from 2001 to 2016 were carried out by far-right violent extremists.’

Lemon went on to quote a number of reports and flashed graphics up on the screen related to domestic attacks by right-wing extremists.
Source: DailyMail

(The Chris he mentioned was Chris Cuomo, who only seems to have an IQ above room temperature when sharing a screen with someone as demonstrably ridiculous as Lemon.)

CNN even put up a graphic to support his stupidity. 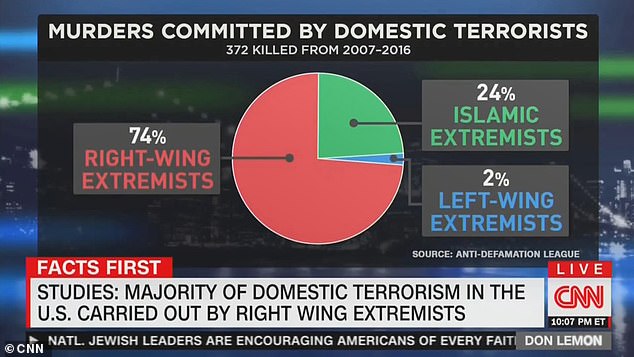 So we can say with confidence that this segment was intentional, and not some dopey off-the-cuff political bunny trail. But is it TRUE?

David Harsanyi from the Federalist took his claims to the woodshed.

Lemon is right that the vast majority of white shooters are men. He’s also correct that men are more violent than women. The majority of men in the United States are white.
Source: Federalist

So, from the outset, Lemon is stacking the deck statistically. Just like doing stats for any ethnically uniform neighborhood in a big city would have men from that racial group as the chief offender, whatever their common nation of origin happened to be.

A terrorist is a person who uses illegal violence and intimidation, especially against civilians, in the pursuit of political aims. This is not a movement. These white men have no palpable ideological or philosophical connection. They are not part of a concerted effort. They do not idolize the same people or subscribe to the same set of ideas. They do not share a worldview. Most of them do not kill in the name of “whiteness.” Few of them have a coherent message. I have as much to do with the Pittsburgh shooter as Lemon does.

The left-winger who yelled “This is for health care” before attempting to assassinate Republican congressional leadership in 2017 — somehow Lemon overlooked this event in his rant about angry white men — has nothing to do with the man who yelled “All Jews must die” when killing 11 innocent people at the Tree of Life synagogue in Pittsburgh. There is no nexus between the person threatening Republicans with ricin letters and the person threatening Democrats with pipe bombs.
Source: Federalist

He goes on to explain the difference in popular opinion to each of these ideas.

Radical Islam has a significant following and a significant number of even ‘moderates’ who agree to at least some of the objectives of the Militants.

Shapiro once took a look at a Pew Research study that shed some interesting, and uncomfortable, light on that subject in a short (6 min) video.

We also spend a lot more money on defending against such carnage than we did back in, say, 2000.

(If he used numbers going back to 2000, do you suppose these stats would look any different? And did they happen to count the ISIS claims of the Pulse Night Club Shooter, or the ‘workplace violence’ of the Fort Hood killer in their totals?)

Radical Islam is an ideology that’s quite popular in the world. White supremacy is a fringe belief that generates outsized coverage because of the horrible actions of some individuals and the political upside some in the media see in giving them attention. Stringing together every act of random violence in the nation—no matter how ambiguous, disconnected, and muddled the political motives of the perpetrators might be—does not make a terror problem. Even if it did, violence is not the monopoly of any group. In the past century, genocides have been perpetrated in Europe, Africa, and Asia.
Source: Federalist