The far-left mob shouted, ‘Tucker Carlson, we will fight! We know where you sleep at night!’

This is the same group that swarmed Ted and Heidi Cruz at the restaurant in D.C. in September.

And yet, the Media (D) says that it’s the President’s rhetoric that could cause violence.

A left-wing mob showed up outside Fox News host Tucker Carlson’s house Wednesday evening, posted pictures of his address online and demanded that he flee the city of Washington, D.C.

Carlson, a co-founder of The Daily Caller and host of “Tucker Carlson Tonight,” was at the Fox News studio when the angry crowd showed up outside of his house.

At least one of the protesters went all the way up to Carlson’s front door, where they left a sign with his family’s home address written on it and rang his doorbell.

The group “Smash Racism DC” posted video footage to Twitter shows one of the mob’s ringleaders leading the crowd in chants of “racist scumbag, leave town!” and “Tucker Carlson, we will fight! We know where you sleep at night!”

After being contacted by The Daily Caller, Twitter deleted the posts revealing Carlson’s home address and that of his brother, as well as Carlson’s former college roommate, Neil Patel, who was a co-founder of The Daily Caller. Twitter also made the shocking move on Thursday morning to suspend the account.

The original caption on the video read, ‘Tucker Carlson, you cannot hide from the people you hurt with your rhetoric, your lies, and your hate.#KnockKnockTucker‘. 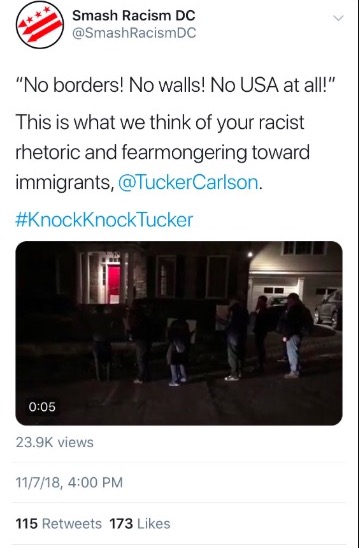 A mob has gathered outside Tucker Carlson’s home demanding his family leave DC because he is a "racist scumbag."

USA Today reports that the group broke the front door and made a bomb threat. Carlson’s wife was home alone at the time.

Carlson’s wife, Susie, was home alone at the time. He told Fox she locked herself into a pantry and called police.

The host of “Tucker Carlson Tonight” said the group broke his oak door and one person mentioned a pipe bomb, as heard on a security video.

“Here’s the problem, I have four children,” he told Fox. “I never thought twice about leaving them home alone, but this is the reaction because this group doesn’t like my TV show.”

Interesting that the WaPo vid mentions that there was bipartisan denunciation of the mob, but only shows right-leaning public figures. These guys aren’t playing, either. The group hasn’t been suspended by Facebook, and the posts are shocking.

Here are a couple of the posts on their Facebook page:

In this one, they suggest a return to the ‘good old days’ of disassembling the homes of opponents.

And this video that condones riots:

This is unreal. These guys seem to want to engage in violence not condemn it.

Tucker Carlson has four daughters. His family shouldn’t be subjected to violent mobs because leftists don’t like his opinions.

Rep. Maxine Waters, Hillary Clinton, Eric Holder, and Cory Booker all need to be held accountable for ginning up this kind of behavior.

We’re also moving onto a new platform, MeWe. It’s like Facebook without the data breaches and censorship. Sign up and you can still get all the ClashDaily goodness by joining our MeWe group. Do you love what we’re doing at Clash? Do you want to kick in to our ‘war chest’ so that we Happy Warriors can maximize the size of the footprint we leave on Leftism’s backside? Here’s a link for ya to do just that. Stay Rowdy!