In Farrakhan, the difference between Democrats and Republicans cannot be more clear.

The Democrats want to have it both ways.

They exaggerate complaints against the right to turn them into career-destroying failures, painting them as [cue the melodramatic voice] evidence of a greater moral cancer that’s destroying the entire party … while conveniently dismissing some really troubling associations on their own team.

For example: ‘binders full of women’ was not evidence of an executive that kept files on promising staffers he had an eye to promoting. No, it was proof of his latent misogyny, somehow.

Or another one: the wildest speculations leveled against Kavanaugh were tagged with the modifier ‘credibly accused of’ to attack any presumption of innocence in the reader’s mind by the same party that buried a woman’s complaint leveled against Keith Ellison.

Many of the Democratic Party’s most influential figures and outside groups avoided the issue as the political world privately pondered whether Ellison — the deputy chairman of the Democratic National Committee who just won his party’s nomination for Minnesota’s attorney general — could survive a prospective scandal in the #MeToo era.
Source: Twin Cities

The decision of his party NOT to #BelieveAllWomen in the case of a Democrat surprises exactly nobody. But that could be the least of the skeletons lurking in his closet.

Louis Farrakhan is openly anti-Semetic and has a big enough hate on for white people that he could easily host his own program on CNN.

He made waves not long ago by attending the funeral of Aretha Franklin, showing up in the front row with Bill Clinton, Rev Al Sharpton, and Rev Jesse Jackson.

Racist Farrakhan with 3 of his good buddies. A picture is worth a thousand words. pic.twitter.com/5BcWMVbxjS

After that, he defended himself against charges of being an anti-semite by borrowing imagery for the Jews from no less than the Third Reich: “I’m not anti-semite… I’m anti-termite.”

Charming. Did we happen to mention he’s got a lot of friends on the Left?

And then he went to Iran. You remember Iran, don’t you? The Big Project by Obama and John Kerry. In fact so dedicated were they to that project that Obama suppressed American law enforcement that would have been inconvenient for the Iran deal he was trying to broker, and John Kerry was covertly meeting with leaders of Iran, encouraging them to just ‘wait out’ Trump’s foreign policy and negotiate with the next Democrats.

Let’s take a look at those leaders in Iran, shall we?

Here’s Farrakhan hob-nobbing with them and joining them in a rousing cultural exchange.

Oh how nice. An American on foreign soil giving aid and comfort to our enemies. Nothing wrong with that picture, is there? Chanting Death to America, Death to Israel.

That fits right in with his call for the 10,000 people to rise up and start killing (his enemies). Even Snopes admits he said it. He’s made it quite clear that his enemies include — at the very least — Jews and white people.

And who does Farrakhan hang around with? Remember the photo that was suppressed for the entire time Obama was in office? Or the hug he gave Mad Maxine Waters?

@DRUDGE_REPORT @rushlimbaugh @foxandfriends @thedailybeast @washingtonpost @SenSchumer @NancyPelosi The most outspoken hater of the Jews is Farrakhan. Here R top Democrats hugging him and making plans 4 the Democrat Party's future. And they call Trump a Racist? pic.twitter.com/hnJexdEykB

Or the fact that Ellison used to run with his crowd?

I love how Democrats are suddenly distancing themselves from Farrakhan, saying he’s “not a leftist.” If that’s true, why is he smiling with Obama, hugging Maxine Waters, hobnobbing with Keith Ellison, and getting tagged in the Instagram post of (hard left) Women’s March leaders? pic.twitter.com/WHRELrW0ye

The ‘used to’ part is contested.

Ellison took exception to Tapper bringing up the issue, and the two also battled when the CNN journalist noted that The Washington Post’s fact checker had given the lawmaker four Pinocchios after he said he had no relations with Farrakhan.

“Jake, they were wrong,” Ellison said. “It is untrue, Jake, I’m sorry. And I’m disappointed that that is why you called me on your show today.”
The tense exchanges began after Tapper said that Ellison “used to follow” Farrakhan.

“You’ve been decrying president Trump’s bigotry. Obviously, you used to follow somebody who continually expressed sexist anti-LGBTQ and anti-semitic bigotry, Louis Farrakhan,” Tapper said during the interview on CNN’s “The Lead with Jake Tapper.”
Source: The Hill

They may all want us to forget that he’s a Democrat hanger-on.

Just like they want us to forget how the Democrats all attended the funeral of a high-ranking Klansman and sang his praises. 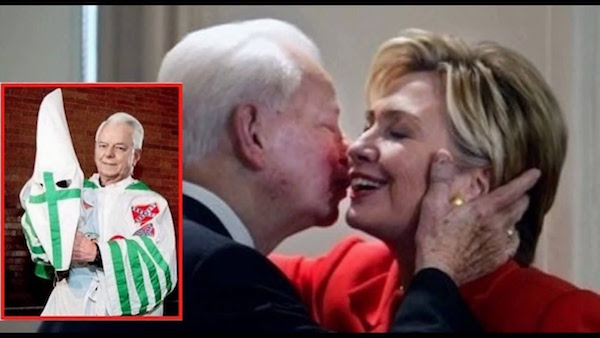 The same party that endlessly spins bogus claims about the ‘racist right’, despite the universal denunciation By the right of any actual bigots who claim to be one of us…

Cannot bring themselves to make a pariah out of Louis Farrakhan.

Kudos to Chelsea Clinton for being one of the few with the moral clarity to denounce him. But when a Clinton becomes the moral compass of your party, you’re pretty much screwed.

They can pretend we’re the racists all they want.

It doesn’t change the truth of who REALLY builds their party on what divides Americans into little competing identity boxes, rather than the greater principles uniting Americans as, to borrow words better than any this scribbler could author: ONE nation Under God, indivisible, with liberty and justice for all.