The Left’s intersectional race-baiting politics have only emboldened their favorite racist. Now he’s even bolder in his offensive public statements.

Should it really surprise anyone? None of his allies have denounced him yet, and those who have, are written off as part of a ‘satanic’ conspiracy against his supposedly noble work. (A Jewish one most likely.)

Look at what our supposedly ‘respectable’ candidates and media types have been up to.

At the midterms, we were seeing unapologetic race-bating and slander of candidates (see the Media’s dishonest citing of the ‘Monkey’ statement as ‘racist’).

Then there was the cheering of minorities voting as a block for candidates on the left as though they are coming together for a righteous cause and open derision for those groups on the right — white women, for example — who supported Conservatives.

More and more across social media, men and women who have committed the sin of having been born with light-colored skin are denounced as being ‘a problem’.

Sarah Jeong’s Twitter timeline shows how she openly hates white people but was hired by the New York Times without hesitation. By contrast, Roseanne Barr made one sarcastic tweet and was ‘erased’ from Television history because of it.

The usual suspects on CNN are no better:

CNN's Kirsten Powers on women who voted for Trump: "They'll say, 'Well, I'm not racist. I just voted for him because I didn't like Hillary Clinton.' And I just want to say that's not — that doesn't make you not racist. It actually makes you racist." pic.twitter.com/P4Hy3KJeHY

The elected Left and their Media(D) enablers are all working so VERY hard to tag Republicans as racists, yet keep coming up empty with only the most superficial explanations of how that is so.

Have any of you ever considered looking into the racism on your own side?

The BIG example on the left is Louis Farrakhan, who even the Women’s March organizers have realized is hurting their brand:

Other Women's March leaders are joining the co-founder's call for the organizers to step down over their Farrakhan problem: pic.twitter.com/wydhjGoXrI

Why is Farrakhan such a big problem? The examples are legion. Even Snopes acknowledges that he once called for an army of 10,000 men to rise up against white men, while citing a passage from the Koran about death being sweeter (and he lingered on that word, ‘sweeter’) than subjugation.

Farrakhan’s message included a list of traits that he believed were “in the white man’s nature” — namely murder and dishonesty — and he added that while white people were slaves to their natures, what black people do “is by learning from your master.”
Source: DailyCaller

What he (the White man) does, he does by nature. What you (Black people) do, is by learning from your master. #Farrakhan #NOISundays

He recently went to Iran, and what did he say there? What would you expect? If he didn’t give ‘aid and comfort’ to an enemy that calls for our deaths, he came very near to doing so. Dear CNN: Racist Bigot Louis Farrakhan Leads Chant Of ‘Death To America’ In Iran — Is That News?

But he’s still seen with Democrats. He was front-and-center at Aretha’s funeral, with Clinton, Sharpton and the REV-Uh-Rund Jesse Jackson. 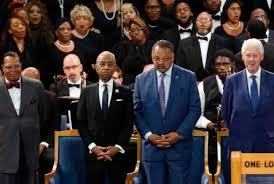 At least seven House Democrats are known to have direct ties to Nation of Islam leader Louis Farrakhan, a notorious anti-Semite and racist who has called Jews “satanic” and said white people “deserve to die.”

With the exception of Davis, the Democratic representatives have ignored repeated requests for comment regarding their relationships with Farrakhan.
Source: DailyCaller

#@Alyssa_Milano Are you going to disavow Obama too? Maybe now you will research who he really is and come to your senses.https://t.co/IHPf0f3q78

Almost as awkward as all the high-profile Democrats that showed up for a certain KKK bigwig’s funeral … as keynote speakers. Dear CNN: Before You Crap On Trump, Explain What Obama Is Doing In This Pic 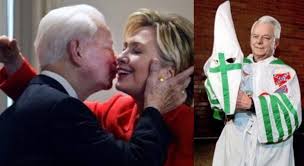 The media hadn’t forgotten about all of these stories, had they? Or is ‘suppressing’ be a more accurate description of what they have been doing?

You do realize of course, that this endless Media gaslighting is how America wound up with a fighter like Tump in the first place?

Your only setting us up for a second Term.