The reason one Federal Judge refused to protect little girls from assault will turn your stomach.

As well it should.

The federal judge in Detroit ruled in the historic case on Tuesday, ruling the law that prevents female genital mutilation (FGM) is unconstitutional. U.S. District Judge Bernard Friedman ruled that congress does not have the authority to make FGM illegal, which it had been classified as illegal under the Necessary and Proper Clause or the Commerce Clause.
Source: Fox2

The historic case involves minor girls from Michigan, Illinois and Minnesota, including some who cried, screamed and bled during the procedure and one who was given Valium ground in liquid Tylenol to keep her calm, court records show.

The judge’s ruling also dismissed charges against three mothers, including two Minnesota women whom prosecutors said tricked their 7 -year-old daughters into thinking they were coming to metro Detroit for a girls’ weekend, but instead had their genitals cut at a Livonia clinic as part of a religious procedure.
Source: Detroit Free Press

We turned a spotlight on this barbaric practice in an article shortly after the first pussy-hat march.

Unlike male circumcision, which only removes skin, there’s significant and lingering pain involved:

One survivor who went through FGM has described the physical pain caused by FGM. Hibo Wardere, now 46, was mutilated when she was six years old. She told the BBC: “An open wound rubbed with salt or hot chilli – it felt like that.”

…It has been illegal to carry out FGM in the UK since 1985, but there has not been a single successful prosecution. This failure has been branded a “national scandal” by the Home Affairs Select Committee.
Home Secretary Amber Rudd said: “FGM is a devastating act of violence that no woman or girl should ever have to suffer and the criminals who perpetrate it should be brought to justice.”

Here’s a chart of 4 different varieties of FGM, from least extreme to most. 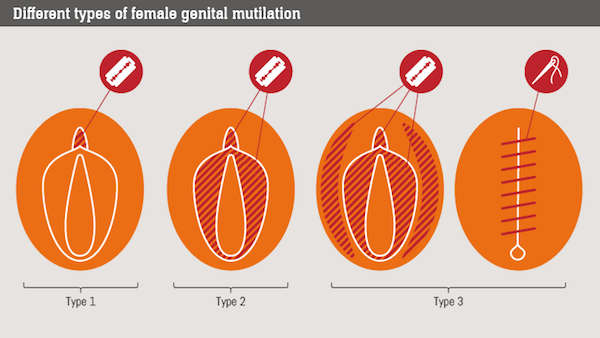 Why would anyone want to remove a girl’s sexual organs?

According to an Imam, it’s done with the intention of suppressing female sexual libido.

He said the surgery is properly carried out with a minimalist approach ‘so that she is not hypersexually active. This is the purpose.’

We also know [the cited Imam is] not unique in his position. An Egyptian MP — Member of Parliament! — argued in favor of the practice just last year.

Because — his words, not ours — the poor impotent men of Egypt cannot possibly satisfy the urges of their uncircumcised wives. Uh, could there be a better solution besides mutilating your women’s va-jay-jays?
Read the full story here

Where are the Feminist protesters when you actually need them?

Oh that’s right, they’re probably standing around in some sort of a ‘protest’ wearing one of those Handmaid’s Tale bonnets.