Naturally, the same people who wouldn’t say ‘boo’ about Antifa, or the various calls for aggressive hyper-partisan ‘protesting’ have their panties in a twist over this.

They’re a song with one note. 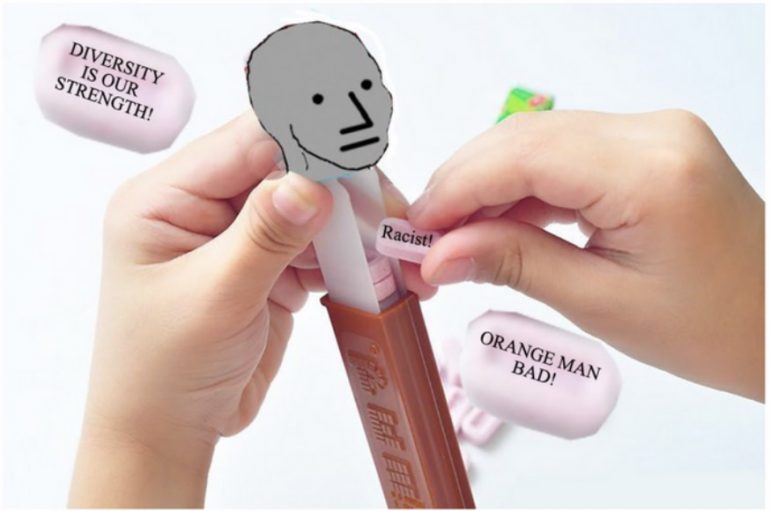 Their positions on any issue are easily predicted by asking the simple question — which side opposes the President?

When we point to Antifa’s track record of violence, their leftist and media apologists are quick to explain away the violence.

These are the same people that can see a racist and/or violent dog whistle lurking in every Republican’s statement.

But let Trump speak up about Antifa and they freak out. Antifa, as you recall, was at Tucker Carlson’s home address, frightening his wife and kids, and kicking at the door.

“These people, like the Antifa — they better hope that the opposition to Antifa decides not to mobilize. Because if they do, they’re much tougher. Much stronger. Potentially much more violent. And Antifa’s going to be in big trouble. But so far they haven’t done that and that’s a good thing,” he continued.
Source: DailyCaller

It’s no secret the President has a fondness for personal courage, those who will face a problem head-on. He holds gutless cowards in contempt.

Your reaction to the President’s statement will depend on what you think he means.

Not surprisingly, the ‘Orange Man Bad’ crowd has flown off the handle and assumed the worst:

Since the quote came from a larger context, let’s look at the REST of what he said.

The Daily Caller asked the president what tactics law enforcement should practice when dealing with groups like Antifa.

“They’re sitting back and watching and they’re getting angrier and angrier,” Trump said of the Antifa opposition.
Source: DailyCaller

The opposition to the lawless mob that wears masks, commits crimes, intimidates people, destroys property, swarms people and assaults strangers they deem ‘nazis’ (including mistaking some from their own mob as ‘the enemy’ and pounding on them). But we’re supposed to take at face value that they’re only attacking ‘fascists’.

Do they think we’ve forgotten how they attacked a free speech rally, have thrown bricks from rooftops, have hurled bottles of piss at the police and have an annoying habit of beating strangers with sticks, or anything else they can get their hands on.

Law enforcement has more or less left them alone except when they’re getting particularly aggressive.

In some instances (looking at you Portland) LEOs have been given explicit stand-down orders from above when Antifa was throwing their collective hissy-fit.

So Trump doesn’t have to be talking about the ‘Proud boys’ (from whom the craven mask-wearers tend to run like the cowards they are) to talk about Antifa’s ‘opposition’.

He’s explicitly named that opposition in the very same interview they have lifted the quote from.

Here it is again:

“They’re sitting back and watching and they’re getting angrier and angrier,” Trump said of the Antifa opposition

A person COULD make crap up about Trump ‘dog whistling’ to the ‘extreme right’.

But why would he have to?

He’s a law-and-order President. And we are not a nation of vigilantes, we are a nation of laws.

Who safeguards those laws and keeps the peace?

A core of extremely competent, courageous and well-prepared law enforcement officers, that’s who.

Should Antifa be afraid of the police if they ever become a serious enough threat that law enforcement decides to drop the hammer?

If they’ve got even a lick of sense? Yeah, they should be plenty afraid of law enforcement.