This is a comparison that might drive Hillary back into the woods with a bottle of Chardonnay. So, do us all a favor and share the hell out of it.

We know that Hillary rigged the Democratic primary to win against Bernie, and she has admitted to wanting to rig the Palestinian election in 2006. The thought of rigging an election isn’t a step beyond her comfort level, apparently.

Hillary had journalists in her pocket, like Maggie Haberman of the New York Times, willing to give her ‘positive coverage.’ We all know that the Media(D) ignored Bill’s problematic sexual assault history and Hillary’s role in demonizing and intimidating the women that came forward. Despite the kid-glove treatment, many reporters were devastated when she lost in 2016.

She had a whole host of celebrity endorsements, raised a ton of cash, and dragged her hacking, seemingly-decrepit body to big, glitzy leftist events while ignoring ‘fly-over’ America.

We know about the huge web of players trying to smear Trump and fix the election for Hillary. We also know that Hillary’s team was behind the Dirty Russian Dossier.

So, it’s not beyond what her camp would be willing to do to win.

So what is the difference between Hillary and Putin? 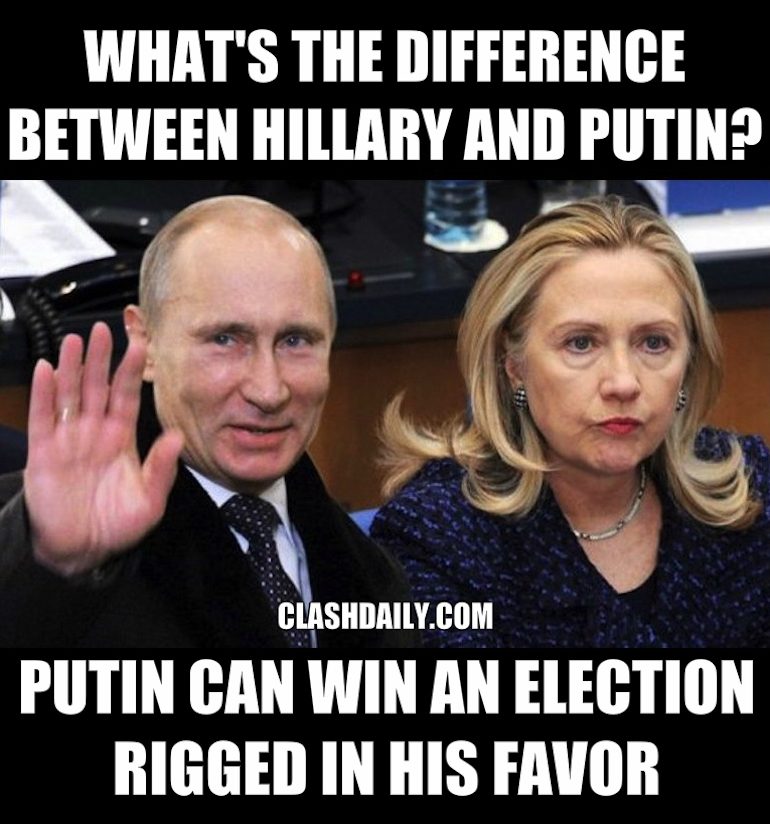 Vladimir, on the other hand, has no trouble winning elections. He’s been in power since 1999 and will be for as long as he likes.

How is it that Putin can maintain power? Well, he rules with an iron fist. There are no debates, no opinion polls that aren’t sanctioned by the government, and even his opponents seem to be present just to make the election look like a democratic process.

Check out this article from February of this year:

The answer is that Russia’s is an election in name only. In truth it is a sham and a smokescreen, designed to confer democratic respectability on to a corrupt oligarchy. For Russians accustomed to unaccountable rule from on high, this is nothing new. More surprising is the supine acquiescence, bordering on complicity, of western democracies.

Putin will win on 18 March because the system he created, politely known as “managed democracy”, removes all elements of surprise. His most credible challenger, Alexei Navalny (who in any case did not expect to win), has been banned from participation on specious legal grounds. Last month Navalny was arrested while urging an election boycott.

Putin’s control of Russia’s television outlets and other media means political opponents are virtually invisible, unless they are in court on a charge. By contrast, his own public appearances receive fawning blanket coverage.

Hillary has said that she might run again in 2020, but she hasn’t cracked the top six of potential candidates. Leading the pack is Joe Biden, followed by Bernie Sanders, Beto O’Rourke, Elizabeth Warren, Kamala Harris, and Cory Booker. MoveOn, the organization that was founded to ‘move on’ from the Clinton sex scandals, has Robert Francis ‘Beto’ O’Rourke in the lead. Even the Democrats don’t want her.

With the economy booming, employment down, and border security being taken seriously, it’s going to be rougher than grandma’s breath for whoever the Democratic candidate is in 2020.