It looks like Chris Rock’s career is about to skyrocket because he’s going to be the only comedian left.

I mean, mocking white people is his entire schtick, right?

The Politically Correct Police are ruining everything, and comedy especially. The only real comedy that there is exists on the right. Comedy is supposed to be on the edge of what is socially acceptable, and these days, that means saying things like ‘Biology Matters’. I mean, you can’t even make fun of a guy wearing a dress now, even if it is blatantly mocking women.

Unfortunately, the jackbooted, leftist thought police are determined to kill comedy completely. Some of the great comedians have said that Political Correctness is going to destroy comedy. John Cleese has spoken about it rather eloquently and Jerry Seinfeld has as well. Of course, George Carlin holds the title in pushing the buttons of the PC police. (I DO HAVE TO GIVE A NSFW LANGUAGE WARNING ON THE CARLIN CLIP).

Pete Davidson had tried to attack a white guy because of the way he looks, and the backlash was imminent.

But then, after Representative-elect Dan Crenshaw handled it with class, Davidson apologized and the pair had a great moment that should have been instructive about how comedy is handled and how to react to it.

What we’re doing is combing through Social Media posts from 8 or 10 years ago and judging people based on what was said in a tweet. It’s ridiculous.

It’s also revealed that there are certain groups that are off limits, and others that you can go nuts mocking. 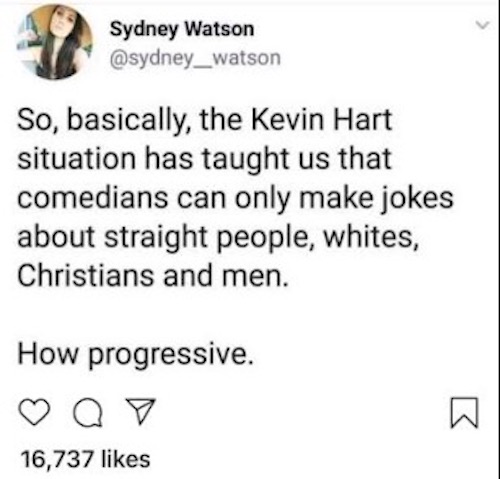 If only leftists thought that other groups were emotionally stable enough to handle a little ribbing about them. Isn’t that what’s implied? That women, minorities, LGBTQ+, and the Genetic Freaks like left-handed people and red-heads are so unbelievably sensitive that they can’t handle a joke? It’s insulting, really. (By the way, that ‘Genetic Freak’ remark was a joke.)

When will it end?

Kevin Hart may have decided it was best to not host the most unpopular show on television because of the backlash, but he was absolutely right to not apologize.

Catch the rest of the bad@ss, unvarnished truth on the Kevin Hart situation à la Doug and Rich right here.

Trump Weighed In On Attacks Against Israel … While Biden Dithered (Video)
May 12th, 2021 Conservative Firing Line