Besides being a completely stupid claim, can you imagine a prof spouting off like that about Mohammed’s child bride?

They love to pick apart Christianity, especially around Christmas time. But can you imagine even ONE of them speaking out about Islam with the same kind of contempt? Tenure or no, they’d be packing their bags sooner rather than later.

If you’re a professor, trying to use religion as a way to tell a MeToo story, which is the better illustration? The Virgin Mary bearing the Christ-child? Or Mohammed being betrothed to a six-year-old girl, and consummating that marriage when she turns nine?

The majority of traditional hadith sources state that Aisha was married to Muhammad at the age of six or seven, but she stayed in her parents’ home until the age of nine, or ten according to Ibn Hisham, when the marriage was consummated with Muhammad, then 53, in Medina. This timeline has been challenged by a number of scholars in modern times.
(See Wiki for various supporting links.)

Let’s have a look at this wannabe “scholar’s” claim, and see if it holds any water.

The virgin birth story is about an all-knowing, all-powerful deity impregnating a human teen. There is no definition of consent that would include that scenario. Happy Holidays.

Here was this writer’s brief answer to his claim. 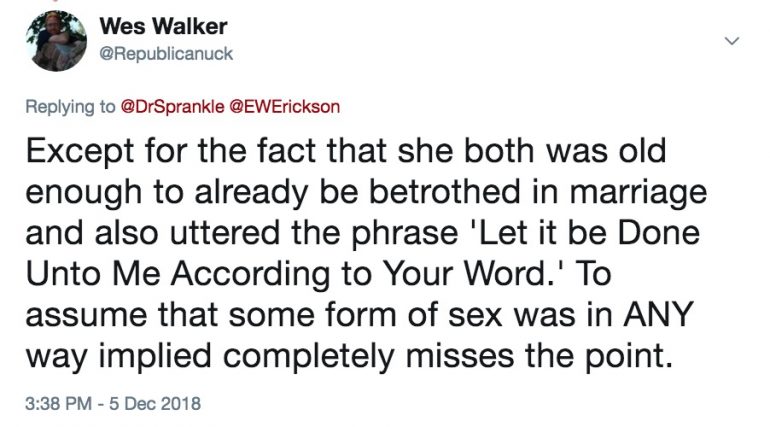 It takes a very dim and lame view of God to think that her bearing a child requires him to somehow ‘bed’ her. The whole point of him being the Author of Creation, and performing miracles in both the Old and New Testaments should make that pretty clear.

You might challenge her claims about HOW she became pregnant, as many skeptics have. That’s fair, and a discussion that could be had. But to both claim God did it, and that He somehow violated her is a patently stupid statement.

Then again, what should we expect from “Minnesota State University, Mankato psychology professor and sex therapist Dr. Eric Sprankle”?

Here’s a quick look at his timeline.

In the Satanic Temple's holiday sculpture at the Illinois Capitol, Eve entices visitors with the fruit of knowledge. How do you like them apples? https://t.co/atROLbKkms

great thread from the brilliant @MissLoreleiLee. “human trafficking” rhetoric is racist and harmful to migrant workers. wealth redistribution and guaranteed housing, food, and health care would do more to halt trafficking than increased policing ever could https://t.co/W7EV84kcHU

I’ve discussed this repeatedly. The issue with the sex industry abolitionists is that they work on a binary. Either you’re a few of the privileged who enjoy it, or you’re trafficked.

There’s zero room for ppl like me who hate the job, but need to survive. Binaries don’t work. https://t.co/YXP68IHrUF

Always a good idea to check if your theology is actually codependency with your abuser. https://t.co/YL8ZZuzNkr

The dog’s mission was to kill George Bush? https://t.co/KUdtbWVj09

"Paying for sex is pathetic," you say, as you compulsively DM "hey" to sex workers on Twitter and then rant on Reddit when no one replies.

These are the tweets of a psychologist, people. A Sex Therapist.

And he’s a professor, too. Is it any WONDER people are losing faith in Higher Education?

Some have claimed the athiest is the guy who says ‘there is no God and I HATE him.’ Professer Eric is exactly the sort of guy cited as proof of that view.

The Leftist social media ‘shut-down’ answer to such ranting is often ‘Who hurt you’? He sounds really angry; maybe he should seek some counselling himself.