Donald J. Trump has been making arguments for a border wall since he announced that he’d run for President in 2015. It was his signature campaign promise and the majority of Americans agree with him. And up until recently, so did many Democrats — like Chuck Schumer, Hillary, and even former President Barack H. Obama.

Watch the video posted by President Trump before the government shutdown:

Let’s not do a shutdown, Democrats – do what’s right for the American People! pic.twitter.com/bZg07ZKQqo

In his tweet on Sunday, POTUS cited President Obama’s wall that he built around his Washington DC home and said that the United States needs a ‘slightly larger version’.

‘President and Mrs. Obama built/has a ten foot Wall around their D.C. mansion/compound. I agree, totally necessary for their safety and security. The U.S. needs the same thing, slightly larger version!,’ he tweeted. 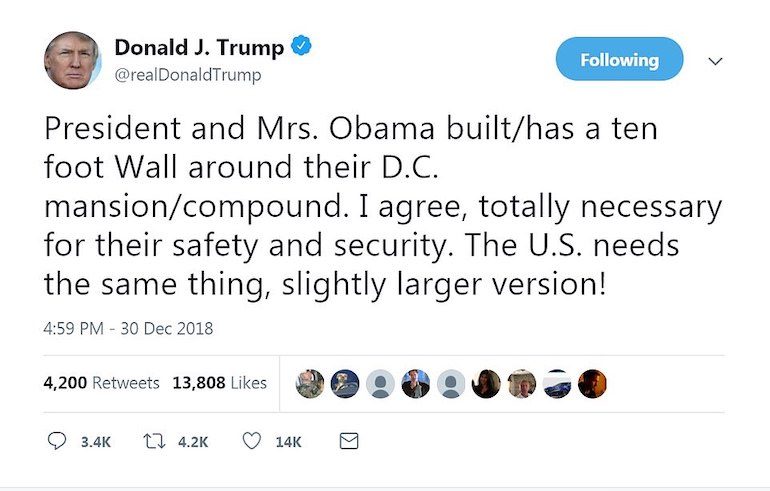 Walls work. Otherwise, they wouldn’t be built. It’s a physical barrier, a deterrent, and, most importantly, a message. It says, ‘Do This The Right Way’ not ‘Come On In’.

The President and his supporters that want a border wall recognize the hypocrisy on the Left when they say that the United States doesn’t need a wall. They’re pretty happy to have walls around their property. It’s just like the celebrities that spout off about gun control at an anti-NRA event while they walk around with armed security.

Like many other people that support a border wall, I understand that a physical barrier will not solve all of the immigration problems, but it will solve the problem of people illegally crossing over the U.S./Mexico border, and that is a YUGE thing. The argument that it’s compassionate to allow desperate people walk across the border is bunk. There are legal channels that you can take from your home country — including an asylum process. The problem is that when we have thousands of people a day walking over the border, and being sold a bill of goods by human smugglers, that isn’t compassionate. Not to mention that there are criminals that come across the border. This puts a backlog on the legal immigration applications.

The contrast between a legal immigrant and illegal was most clearly displayed in the senseless and tragic death of Officer Ronil Singh on Christmas Day.

By the way, it’s not so much a problem on the massive northern border, is it? It’s not like Canadians are flooding the United States en masse. Although, if Trudeau wins reelection in 2019, his soft-on-terrorists stance has been on display over and over and over again, so the President might want to consider ramping up the border security to the north. But hey, one border at a time, right? #Priorities

We can’t allow more children to be brought over by human traffickers, or drugs to be hauled across the border by gang members or mules. We can’t continue to turn a blind eye to the ‘coyote’ human smuggling industry that has grown at the southern border. We can’t allow 80 percent of the women and girls that cross the border to be subjected to rape. We cannot permit poor immigrants who are indeed looking for a better life to face a treacherous journey where children die because of maltreatment from human smugglers that lie to them and treat them horribly after being paid.

We just can’t allow tens of thousands of people a month to illegally cross the border while legal immigrants wait in limbo for years as their paperwork is being processed.

None of that is compassionate. Up until 5 minutes ago, the Democrats had agreed.

We need that Wall. Or a Fence. Or any sort of barrier that will stop the illegal crossings.

President Trump is determined to get the funding for the Wall by shaming the Democrats with their own words and actions.