This young lady has been chosen as the ‘Most Beautiful Girl In The World’… again.

Thylane Blondeau was selected as The Most Beautiful Girl In The World when she was just six years old, and she has done it again at the age of 17.

She rocketed to fame in 2007 at the age of six after being named the ‘most beautiful girl in the world’.

The awards, which began in 1990, pride themselves on being among the most ‘diverse’ beauty awards, with this year’s video announcing the winners racking up over two million views in just two days.

It’s not difficult to see why.

There is no denying Thylane’s beauty.

Thanks so much @iamkrislou you guys are so talented .love you ????

Watch the announcement video: (At the time of writing, the view count is almost at 2.8 million.) 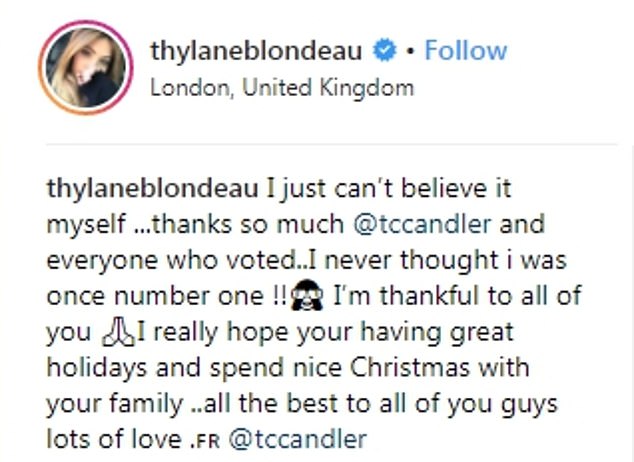 In case you were wondering, she placed second last year.

She’s been modeling for most of her life.

Thylane walked for Jean Paul Gaultier at the age of four and then later, aged 10, became the youngest ever model to pose for Vogue Paris – wearing short dresses and heavy makeup – in an editorial that attracted criticism at the time, for being too ‘sexualised’.

But her mother Veronika Loubry, a fashion designer, defended the cover at the time, telling a French newspaper, ‘The only thing that shocks me about the photo is the necklace that she’s wearing, which is worth 3 million Euros,’ or about $4.3 million.

Thylane, who is the daughter of French footballer Patrick Blondeau, is now a brand ambassador for L’Oréal, and has been named the face of a perfume by French designer Lolita Lempicka.

In January 2018, Thylane was announced as the new face for Juicy Couture.

The French model who was once dubbed ‘the most beautiful girl in the world’ is now the new face of Juicy Couture.

Thylane Blondeau, 16, took to Instagram today to announce her partnership with the LA-based brand, writing: ‘It’s out ! I’m so excited to announce that I’m the new face of @juicycouture.’

Is Thylane Blondeau the Most Beautiful Girl In The World?