“We’ll always have Paris.” (In an urn on the mantlepiece, anyway)

Remember how the Left told the world how morally superior Europe was to America for having so foolishly voted for Trump? How’s that working out now?

Theresa May was teetering on the brink of a non-confidence motion from her own party.

Angela Merkel has worn out her welcome in Germany. Even Hillary and Kerry have criticized her open-borders immigration policy.

And Macron, who was only elected last year? His popularity rating among the French is sitting somewhere between Syphilis and Gas Station Sushi.

The very city where Globalists like Obama signed their precious Environmental accord is now quite literally on fire. With all that black smoke rising up from burning cars in France, good luck hitting those precious ‘environmental targets’ now.

But what is the French government DOING about the people’s uprising against their own government’s unjust and unaffordable hikes in fuel taxes?

Mass arrests. Even their major landmarks are barely visible through the haze of teargas.

You know it’s bad when even some police have started removing their helmets in solidarity with the protesters.

It’s not even left wing or right wing, it’s a whole bunch of pissed off citizens saying ‘enough’.

Paris is on lockdown as armed police battle to contain ‘yellow vest’ demonstrators with more than 700 arrests so far today in the fourth straight weekend of demonstrations over living costs and proposed tax rises in France.

Dramatic photographs offer a snapshot into the volatile atmosphere surrounding the streets of France, as ‘yellow vests’ continue to demand more concessions from the government after Macron’s U-turn on the fuel tax.

While elsewhere rioting has spread across Europe to Brussels and Amsterdam as Belgium and Dutch police brace themselves to more violent demonstrations.

… Despite the repeated skirmishes, Saturday’s anti-government protests appeared less chaotic and violent than a week ago, when crowds defaced the Arc de Triomphe, set vehicles ablaze and looted high-end stores in the city’s worst rioting since 1968.

Prized Paris monuments and normally bustling shopping meccas were locked down Saturday at the height of the holiday shopping season.

The Eiffel Tower and Louvre Museum were among the many tourist attractions that closed for the day, fearing damages amid a new round of protests. Subway stations in the center of town were shut down.
Source: DailyMail

Meanwhile, even the uber-leftist site ‘Mother Jones’ has been forced to admit an ‘uncomfortable’ truth about OUR president, under the headline: “Donald Trump Is About as Popular as Other Presidents” (From that same story, which we will reference, but not live-link to:)

I’m not trying to make you depressed, but here’s the Gallup presidential approval tracker for Donald Trump and three other recent presidents at about the 100-week mark: 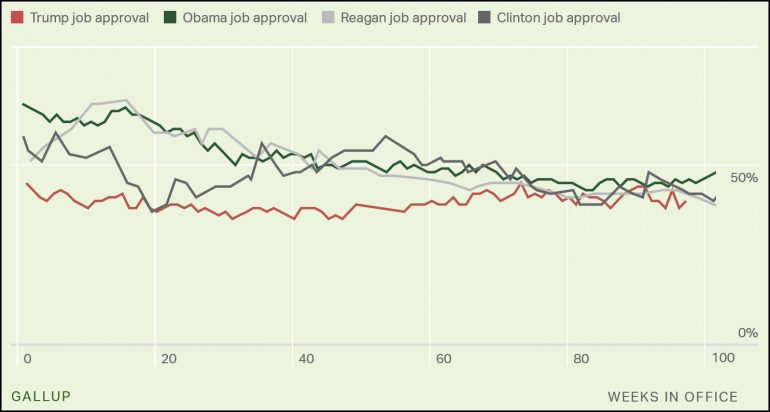 Maybe instead of endlessly complianing about how ‘Bad’ we have it here, the Media might want to open their eyes, look around the world and see that — even though they still believe ‘Orange Man Bad’ — life here in America isn’t anywhere NEAR as chaotic or ‘Jackboot-ed’ as their reporting might have us believe.