This story starts out as a real badass ClashDaily story if ever there was one.

Once upon a time (last Tuesday), a 25-year old woman from Chicago was waiting for a bus early in the morning on her way to work. It was a rough part of neighborhood, so she obtained a conceal carry license and was packing heat. It’s a good thing, too. A 19-year old man approached her and attempted to rob her at gunpoint. There was a struggle, and she managed to pull out her gun and shoot him in the neck. The frightened woman ran off down the middle of the street as the man ran off in another direction. He was apprehended by police and later died in the hospital.

A young woman was trying to get to work when a young man tried to take what she has by force.

It’s a cautionary tale with a simple message: Guns are great for self-defense.

Another message hidden in that quick tale is this: Bad guys carrying guns wanting to rob people should think twice about it because they could end up dead.

Now, it would be much better if people didn’t rob people at gunpoint and put themselves in a situation that would get themselves shot, but this is the broken world that we live in. People will still try to take what is not theirs, and victims have a right to defend themselves, their loved ones, and their property from criminals.

Of course, a young woman alone in a rough neighborhood might have thought the man wasn’t just looking for money and her cellphone, and could easily think she was about to be raped. After all, there was a struggle. When a man puts their hands on a woman after showing her a gun, all bets are off.

As mentioned in our little tale, the neighborhood was known to be a high crime area.

The shooting and attempted robbery occurred at a bus stop in the 500-block of West 103rd Street at about 6:15 a.m., police said.

The incident was captured by surveillance video. The victim, a 25-year-old woman, was waiting for her bus when a 19-year-old man attempts to rob her at gunpoint.

The woman, who has a conceal carry license, was armed as well. Surveillance video shows as they struggle, she pulled out her gun and shot him in the neck.

The suspect took off running down the street and she ran in the opposite direction. Police found him and transported him to Christ Hospital, where he was pronounced dead.

Neighbors in the area say they are proud the victim protected herself.
Source: ABC 7 Eyewitness News

Watch the news report with the surveillance footage:

Watch another news report which features the reaction from a few local women:

The people in the neighborhood said that the woman did the right thing. Some even called her a hero.

Here’s Zack, just so you can get to know a little bit about this fellow. In his Twitter bio, he says that he is a ‘proud SJW’ — a Social Justice Warrior. That’s rather militant sounding, don’t you think? Also, note his Pinned Tweet which states that if he ever gets shot, he wants his injury or death politicized immediately to stop people from owning guns. 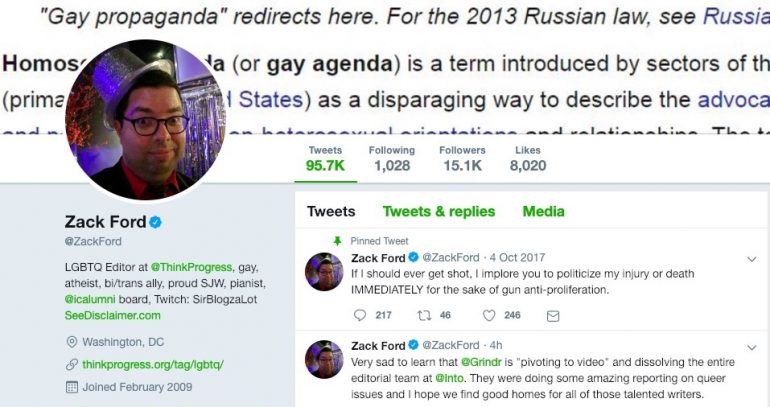 His tweet criticizing the shooter was a real doozy, but he has since deleted it.

Zack puts the onus of the death squarely on the victim of the attempted robbery and says that she should have let him rob her.

Interesting how he says that neither the law-abiding gun owner or the potential robber should have had a gun.

So, law-abiding individuals should just allow themselves to be the victims of crime? That’s ridiculous! If the robber was a rapist, should she have let him just rape her? Because (unfortunately) the penalty for rape isn’t death?

Zack got hammered in the comments for his Tweet on the shooting, so, (to his credit,) he attempted to make some clarifications. (Screenshots because Zack is on a Tweet-deleting binge right now.) 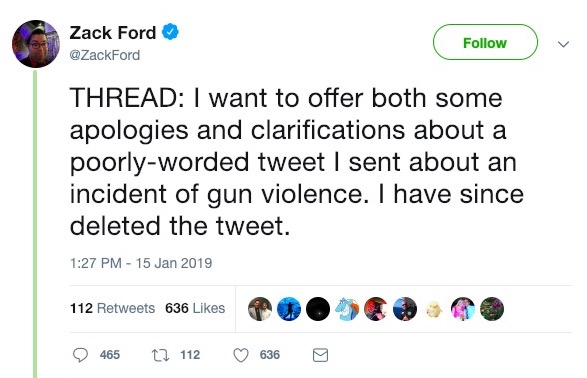 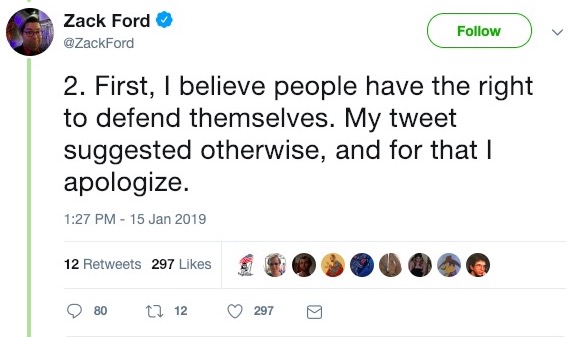 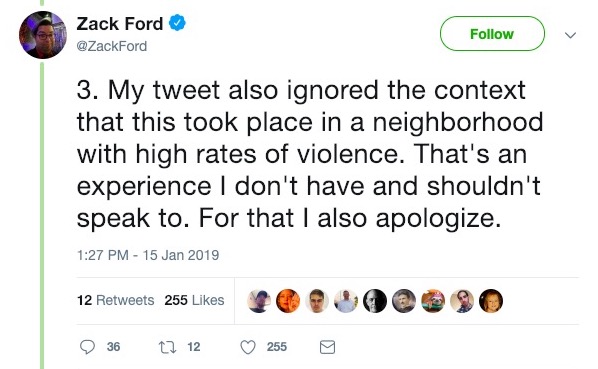 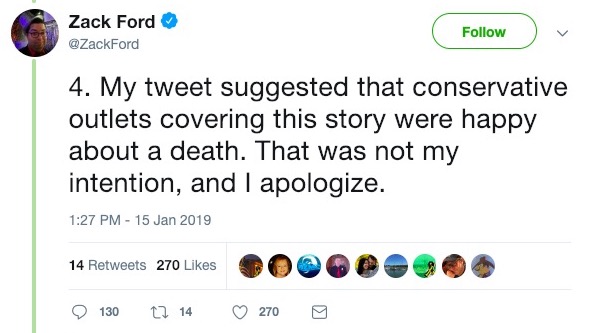 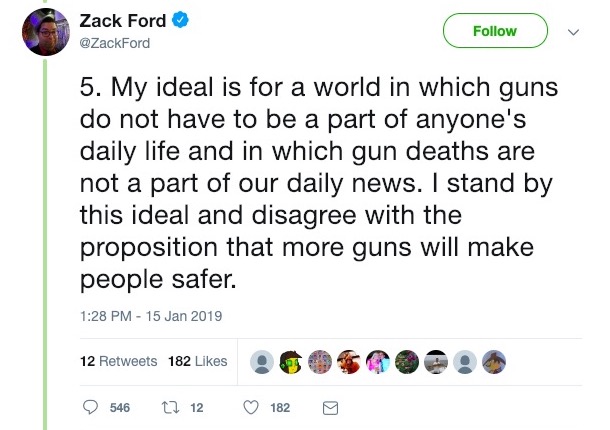 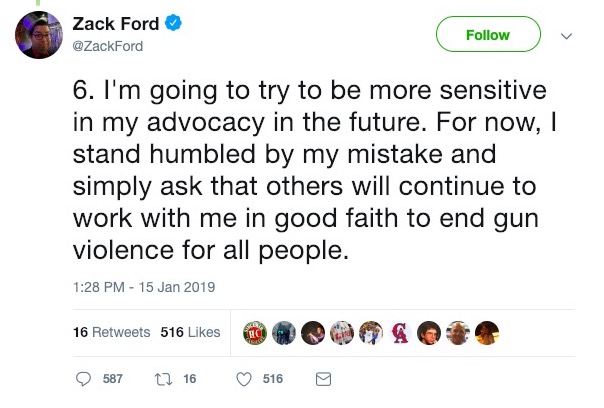 In his fifth tweet, he says that he doesn’t want to have gun deaths part of the daily news. Don’t we all want that? One senseless gun death is too many. But that’s not what this was. This was someone who threatened a vulnerable young woman with a gun to take what he wanted and she reacted by defending herself.

We can disagree and debate what measures are best for ending violent crime, but hey, he’s at he apologized for saying that conservative outlets were giddy at the death of a 19-year old man. He also admits that he doesn’t understand what it’s like to be in a high crime area day after day, and believes people have the right to defend themselves. He sums up by saying that he was humbled by his mistakes and will be more sensitive in his anti-gun crusade in the future. 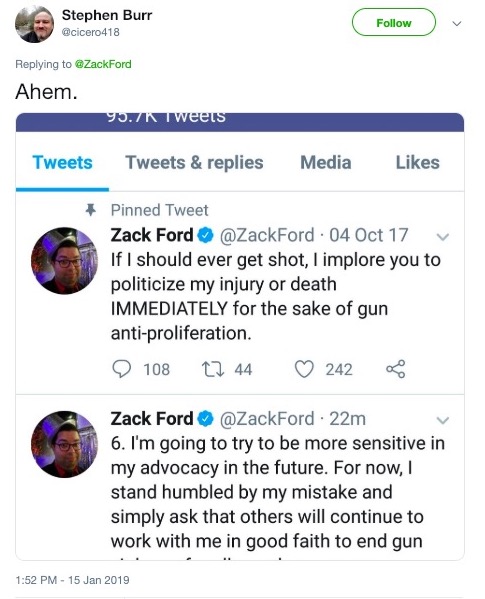 He says he’s going to be more sensitive, but his pinned tweet still says that if he is involved in a shooting he wants it politicized immediately for the anti-gun cause.

That right there is a class act, my friends.

Can you imagine how quickly Zack The Little Snowflake would melt if he read this book by Regis Giles?

Here’s a badass book on how to be a Warrior Chick by Regis Giles — daughter of our very own Doug Giles: