A new government report is going to put a real damper on the gun grabbers that believe that clamping down on gun sales will reduce crime.

In what will come as an absolute shocker to The Media(D) and gun-grabbing leftists, (but I repeat myself,) it turns out that criminals don’t obey the law. Not only that, they don’t obey gun laws either.

Someone should forward that PSA to ‘Proud SJW’ Zack Ford of ThinkProgress before he spouts off about self-defense and gun possession again.

A new report released by the Department of Justice shows that the vast majority of criminals who were in possession of a firearm when they committed the crime obtained the gun illegally. Shocker, right? The report is based on a 2016 survey of both state and federal prisoners who were in possession of a firearm during their crime. The survey reveals that only around 7% of guns had been legally obtained from a licensed firearm dealer. Almost half were purchased from the underground market.

An estimated 287,400 prisoners had possessed a frearm during their ofense. Among these, more than half (56%) had either stolen it (6%), found it at the scene of the crime (7%), or obtained it of the street or from the underground market (43%). Most of the remainder (25%) had obtained it from a family member or friend, or as a gif. Seven percent had purchased it under their own name from a licensed frearm dealer.

You know that ‘Gun Show Loophole’ that is often repeated as the way that criminals get their hands on firearms and used as a fearmongering tactic by the anti-gun crowd?

Barry committed to closing the loophole by executive order:

Yeah, about that loophole that hands over weapons to criminals…

The survey also revealed that only 0.8 percent of prisoners who possessed a gun during their offense got the firearm from a gun show, a statistic which shows that “gun show loopholes” often decried by gun control advocates are not contributing significantly to crime.

“[The survey has] consistently show that there is no such thing as criminals exploiting a ‘gun show loophole’ to arm themselves for their crimes,” said Lawrence G. Keane, senior vice president of government and public affairs for the National Shooting Sports Foundation, according to Guns.com. “Perhaps lawmakers should spend less time on these ‘solutions in search of a problem’ and more time on fixing the background check system, or on any of the issues that voters actually rank as a priority.”

Included in the DOJ report are some handy tables for reference and a boxed off section with the highlights.

This table shows that only around 10% of all prisoners obtained their gun from a retail source: 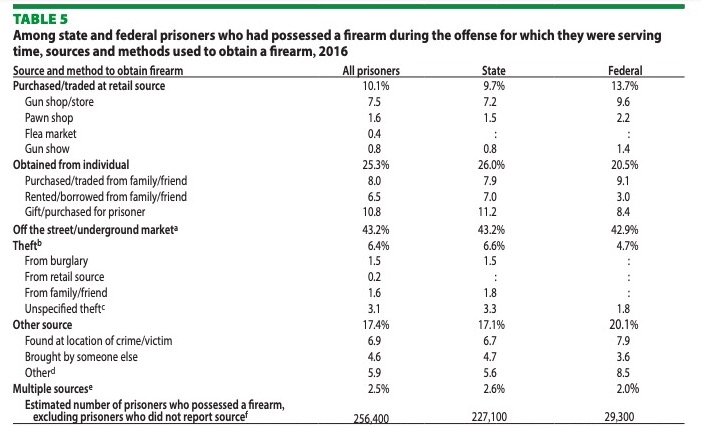 Table 6 shows that almost 90% of prisoners obtained their guns from somewhere other than a retail source: 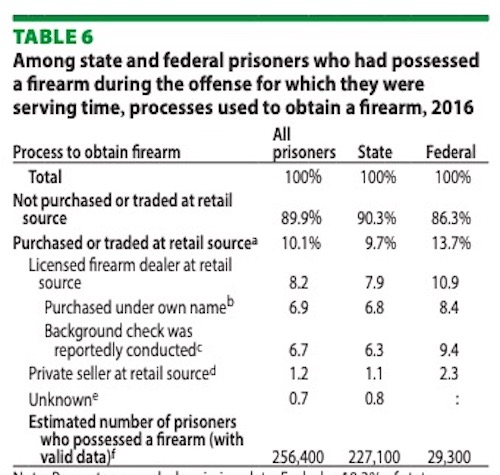 Here are some highlights:

In case you can’t read it, here it is in full:

Now, we just need to get The Left and The Media(D) to face reality.