So much for any pretense of ‘safe, legal and rare’.

Shout Your Abortion founder Amelia Bonow, went on a specialty kid’s program. Its premise is simple — have kids meet different people and talk to them. One episode was a ventriloquist. Another was a bounty hunter. Or an acupuncturist, or a deaf person.

It’s a show that’s obviously got a political agenda, too. Other episodes include having kids meet a Japanese internment survivor, a teenage mom, a transgender soldier, a drag queen, and a gender non-conforming person.

Guess what they had Ameilia Bonow talking about, to an audience of middle schoolers? You guessed it… having an abortion!

Because, honestly, what middle schooler DOESN’T want to listen to some woman go into weird details about how great it is to have an abortion? 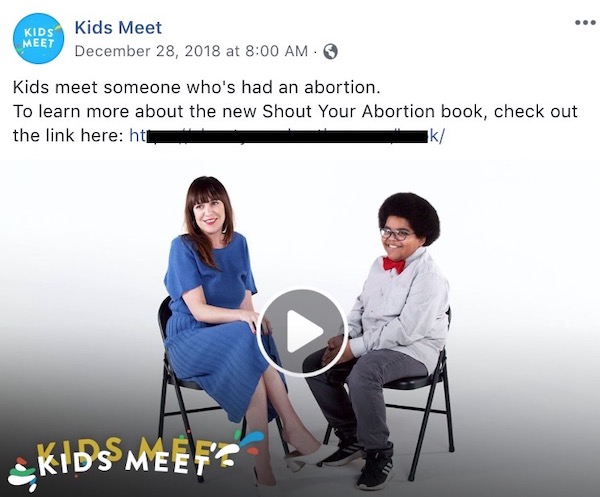 A jarring eight-minute video from Cut’s HiHo brand released on Friday features feminist and “Shout Your Abortion” movement founder Amelia Bonow promoting abortion to children. The segment is predictably filled with anti-science and pro-abortion talking points and includes Bonow bragging about her own abortion to the young boys and girls.

Notably, Bonow tells the children that an abortion procedure “sucks out the pregnancy,” comparing its seriousness to that of a dentist appointment. She also frames the murder of the unborn in religious terms, calling he got pregnant, she recalls.

…”You go to the doctor, and they put this little straw inside of your cervix, and then inside of your uterus, and then they just suck the pregnancy out,” Bonow tells two young girls. “And it was like a crappy dentist appointment or something. It was just like, ‘This is a body thing that’s kind of uncomfortable,’ but then it was over, and I felt really just grateful that I wasn’t pregnant anymore.”

After being asked about the circumstances of her pregnancy, Bonow says her partner didn’t wear a condom and they took “a short cut.” Bonow says she immediately wanted an abortion the moment she found out she was pregnant; both she and her partner were “bummed” when she got pregnant, she recalls.
Source: DailyWire

She went on trying to talk a young lad — who was okay with some abortions but not all, who suggested adoption as a reasonable alternative — out of a position of what she called ‘forcing women to create life’.

That’s what passes as ‘educating’ people now? Hiding the scientific or medical truth of the events behind convenient euphemisms? Dismissing it as inconsequential? Arguing AGAINST adoption?

You’d almost think Bonow’s goal wasn’t so much to inform the kids as to groom them into future clients of Planned Parenthood. We realize that their management likes their fancy toys (who can forget that woman who wanted a Ferrari?)

Heck no! This is practically a recruiting drive among middle-schoolers. If you pay attention, it’s selling a message — not of monogamous fidelity (that ‘old-fashioned’ idea), and not even the more recent ‘commonsense approach’ of “Safe Sex” that was pushed so hard from the 80s until now.

Safe sex isn’t REALLY that important. Because if you’ve just ‘got’ to take that ‘shortcut’ with whoever your hookup happens to be — no problem. You can make that problem like it never happened. Right?

Not quite. Besides any of the things that can go wrong medically with the procedure, or any lingering negative physiological or psychological outcomes of that ‘harmless’ choice, that’s not the only problem these impressionable kids (or the ones that may watch this on the internet) may face.

Like three now-untreatable STDs that are on the rise:
World Health Org Says, ‘Oral Sex Is Spreading An Untreatable Super STD’ – So Gross!

And the message she’s pitching, not to mention a few cultural innovations, is leading to a spike in those disease numbers.
NASTY: America’s Got An STD Problem – Experts Say It’s Because Of …

Maybe instead of working so hard to break taboos, we should ask ourselves why they existed in the first place. Not all changes are for the better.