This report is shocking. You mean… they could have done MORE?!?

Some Big Tech execs were happy to go ‘above and beyond their job responsibilities’ to get Hillary elected, and she turned them down.

Hillary’s failure in the 2016 Election was partly due to the successful social media campaign of Donald Trump. Google was all Team Hillary and manipulated searches to help bury the negative stories about her, but according to Guy Kawasaki, a former Apple executive, Big Tech execs offered lots of help for Hillary’s campaign. In his upcoming book, Wise Guy, Kawasaki reveals that Hillary refused the help that was offered to her.

Hillary Clinton rebuffed the efforts of Silicon Valley big shots and executives at powerhouse tech companies such as Microsoft and Facebook to help get her elected out of ‘hubris’, claims a former Apple boss.

Guy Kawasaki, a venture capitalist and entrepreneur who was one of Apple’s original marketing chiefs, supported Hillary in the 2016 presidential election after he was impressed with her ‘intelligence and sense of humor’ while attending one of her fundraisers in Los Altos, California in 2015.

In his book, Kawasaki claims that he saw some major areas in which Hillary’s campaign was lacking and could use improvement, so he reached out to them three times but was rebuffed. He believes that if Hillary had taken the wealth of assistance offered by Big Tech executives, the election results might have been different.

Kawasaki said executives at Microsoft and Facebook told him they wanted to help Hillary ‘above and beyond their job responsibilities’ but they were also snubbed in an ‘attitude akin to hubris’.

Guy Kawasaki was a big Hillary fan, despite admitting in an Instagram post that he hadn’t heard her speak until the campaign.

He got to meet Hillary as seen in this photo which was taken at one of her fundraisers in Los Angeles in 2015. 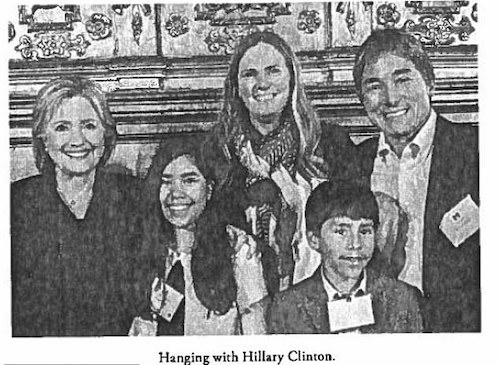 Kawasaki had even hoped that Hillary would pick Sen. Elizabeth ‘Fauxcahontas’ Warren as a running mate.

Another of my favorite pictures of Hillary Clinton. Everyone was all smiles!

Wow. That’s got to be frustrating. The campaign team for the person that you support for President doesn’t want your assistance in an area of expertise — but thinks it’s a great idea to have some schlub in a Donald Duck costume protesting the opponent. Yep, that’s gonna change minds.

He writes that in 2018 he ‘met with executives at Microsoft and Facebook. We talked about how their companies interacted with the presidential campaigns.

‘Both executives told me that they and their company colleagues were Clinton supporters and had wanted to help above and beyond their job responsibilities.

‘Both told me the Clinton campaign turned down their offers to help. By contrast, the Trump campaign accepted all the help that was offered by these companies.’

Executives from the Big Tech giants all admit that they wanted to ‘collude’ with the Hillary campaign.

We all know that Big Tech is overwhelmingly left-leaning, and it’s evident in their donations.

According to Open Secrets, employees at Alphabet, Apple, Amazon, Comcast, Facebook and Microsoft collectively donated more than $3.5 million to Hillary.

Meanwhile, Trump only collected around $50,000 from the tech industry.

President Trump has said that it was his ability to reach out to people directly through social media that made a difference for him. He said that despite Big Tech tilting heavily left, he was able to get his message out.

In September, he told The Daily Caller that he believed that Social Media(D) interfered in the 2018 midterms by supporting Democrats.

He said: ‘If you look at all, virtually all of those companies are super liberal companies in favor of Hillary Clinton.

‘Maybe I did a better job because I’m good with the Twitter and I’m good at social media, but the truth is they were all on Hillary Clinton’s side, and if you look at what was going on with Facebook and with Google and all of it, they were very much on her side.’

There certainly seems to be evidence of that.

Hey Facebook: We Have Some Questions About Your ‘Tamper-Free’ Midterms

That doesn’t even include the conservatives that have been outright banned on Social Media(D) platforms, had their reach diminished significantly *cough*ClashDaily*cough*, or had posts flagged for ridiculous reasons.

He  [Kawasaki] writes that as Hillary refused the help, the Trump camp took advantage of every offer of assistance. Kawasaki claims that it was the executives that made the difference for Trump.

He scathingly writes: ‘Eat when served.

‘Was it arrogance, shortsightedness, or understandable prioritization that made her campaign turn down the offers of assistance?

‘We’ll never know, but I learned several things from this debacle: If someone with over 10 million followers offers to help you, you should probably accept the help.

‘If Microsoft and Facebook offer to help, you should accept their help.

Well, we should probably thank Hillary for being the arrogant, know-it-all that refused to visit the Rust Belt, believed the New York Times polls, relied on celebrity endorsements and didn’t take the extra help from Big Tech when it was offered.

Thank the Lord for Hillary’s arrogance or Big Tech could really have meddled with the election and we wouldn’t have these two fantastic years with Donald J. Trump as President!