The new ‘Public Square’ has two sets of rules — one for conservatives and one for leftists.

What’s really hilarious when the leftists turn on each other. Then Social Media(D) doesn’t know what to do. If only they allowed treated everyone the same way and actually cared about free speech.

They care about Ellen Barkin’s free speech, though.

Leftist actress Ellen Barkin posted some very nasty things on Twitter directed at comedian Louis CK. She said that she hopes that the stand up comic is raped and shot at. Twitter immediately suspended her.

Despite Barkin’s posts, and the outrage that it drew, even from some other leftists, the Social Media (D) platform did nothing.

In case you forgot who Ellen Barkin is, she’s the knock-off Goldie Hawn that appeared in such classics as, The Adventures of Buckaroo Banzai Across the 8th Dimension and Shit Year. Of course, she was also in Ocean’s Thirteen and received a Golden Globe nomination for her leading role in Switch in 1991.

The Daily Beast ran an article that Louis CK, (who had been disgraced in the #MeToo era for performing a sexual act in front of women without their consent,) was making his comeback by ‘pandering to the alt-right’.

Barkin was reacting to the leaked bit of Louis CK’s latest special where he mocks the gender identity activists that demand that we ditch biology and thousands of years of linguistics and address people by their ‘preferred pronouns’. Making fun of the elimination of biology and the demand that everyone conforms to the internal identity of the individual rather than biological reality is now verboten.

Ellen Barkin made sure that Louis CK was aware of that by suggesting that he study the issue further before making jokes about it.

Kidding again… she said she hoped he was raped and shot at. (This is a photo in case the tweets suddenly go ‘missing’.) 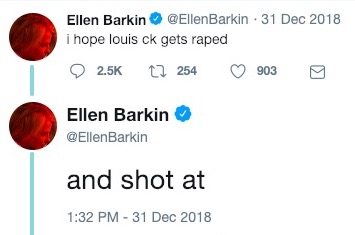 for all of you ready to jump on myback, think for a minute about how louis ck must talk about the women who outed him? what do you think he wishes on them? do you think he will assault a woman again? read up on serial sexual assault

no, you are mad. and very very sick. i am enraged.

What a peach, she is!

She continued with her ranting as she bragged about blocking other Twitter users with very few followers for making comments that she didn’t like.

louis ck is not “brash and unapologetic”. louis ck is a sociopath and a serial predator.

Then she was attacking the attackers.

interesting that most of the aggressive responders to my tweet r anti-choice anti-science anti-immigrant anti-poc christians.
I’m a Jew, an eye for an eye has its place for me. this sociopath &serial predator will continue harming. stay safe while u clap

Twitter has become a platform not dedicated to the free exchange of ideas, but a place to ensure that people remain inside their own worldview bubble and are never challenged. If someone says something you don’t like, you can block them or mute them, possibly report them, and continue to mock them. It really does bring out the worst in people. Especially those that want to parade how virtuous they are like Ellen Barkin.

Ironically, a Canadian feminist, Meghan Murphy, was permanently banned for tweeting that ‘Men aren’t Women’ back in November.

So, citing biology isn’t ok, but wishing that a white man was raped and shot for pointing out that it’s a weird entitled attitude to say ‘I demand that you refer to me as what I think I am’ is apparently totes kewl with the Twitter gods. Would Barkin’s tweets, as someone with over 174,000 followers, could this be viewed as a ‘call to action’? Maybe. Nonetheless, I still think it’s a really disgusting and dangerous thing to tweet. There are some nutters out there that might think it’s a good idea to hurt the guy. We’ve reported that some of those transgender activists are rather violent with their rhetoric, and more than willing to follow through with physical action.

The issue is that the left and the right are treated completely differently on Social Media(D) — you can’t question leftist dogma without getting your account slapped with some sort of warning, but those with the ‘correct’ beliefs are free to be as aggressive as they want to be.

Amnesty International has even said that the rules are enforced inconsistently. They were speaking specifically about abuse of women online in this case, but it’s all about equality, right? Why can’t the same criticism apply in this case?

Twitter’s inconsistency and inaction on its own rules not only creates a level of mistrust and lack of confidence in the company’s reporting process, it also sends the message that Twitter does not take violence and abuse against women seriously – a failure which is likely to deter women from reporting in the future.