You’d think a would-be thief in Brazil of all places would know better than to pull a stunt like this.

It was the birthplace of MMA, after all.

But, since there is no shortage of stupid criminals in the world, here we are telling you about it.

The loser in this story decided it was a good plan to mug a girl.

(Narrator: it was a very bad plan.)

The loser had a problem on his hands. He didn’t have a gun with which to mug a girl.

So our loser came up with the next best thing…

(Narrator: most dumb criminals would have grabbed a knife)

… a gun he made out of cardboard.

(Narrator: this sounds like it’s a parody story, but sadly, it’s true.)

Armed with his, uh, ‘weapon’, he set out in search of a victim.

Maybe this will help acquaint our readers with who she is. 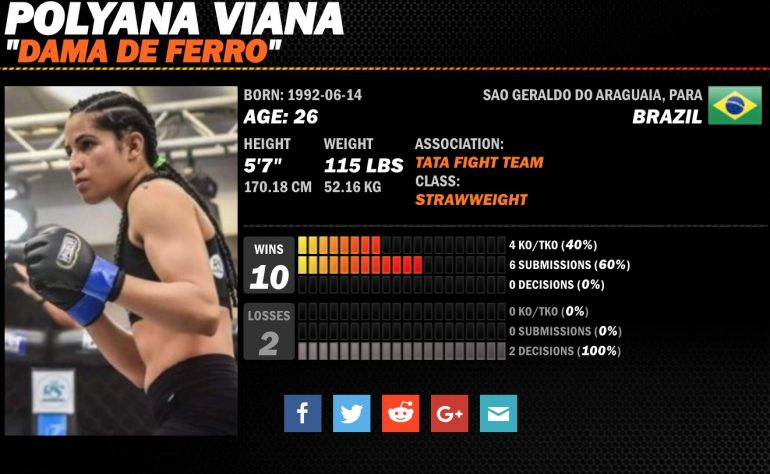 She’s got herself a 10-2 record, too. And that doesn’t even account for what she did to our dumb punk.

Seriously? SHE’s the one he went after with his prissy little cardboard gun?

She beat the absolute hell out of him.

UFC fighter Polyana Viana was waiting outside her Rio de Janeiro apartment on Saturday, when the thief approached and threatened to take her phone.

Realising the danger, the Brazilian strawweight took matters into her own hands, using her MMA skills to drop the man and keep him immobilised until the police arrived.

“He said: ‘Give me the phone. Don’t try to react, because I’m armed’,” Viana told MMA Junkie.

“Then he put his hand over [a gun], but I realised it was too soft.

“So I stood up. I threw two punches and a kick. He fell, then I caught him in a rear naked choke. Then I sat him down and said, ‘Now we’ll wait for the police.'”
Source: BBC

And that’s why martial arts training is a good idea.

The cops weren’t there to help her out.

The only thing they had left to do when they arrived on the scene was to take out the trash.

Cartoon of the Day: The enemy within
March 7th, 2021 Liberty Unyielding