I can hardly believe I’m writing this, but credit to Anderson Cooper — this time, he actually asked some solid questions.

The same media whose ratings-chasing helped push Trump to celebrity status during the primaries is at it again. They’re turning Ocasio-Cortez into a celebrity du jour.

Forget about how she spouts nonsense that gets her a Four Pinocchios rating. (Which Cooper called her out on.) She’s earnest and sincere. That’s what really counts in a policymaker, these days, right?

Sadly, there may be more truth in that jab than we care to admit.

She’s now playing the media darling angle for all she’s worth. And she’s got a good sense of how she needs to play to her base.

Her ideas are still hot garbage — true. But her loyalists won’t give a damn about that trifling detail.

.@AOC says the president is a racist, “no question.” The White House told 60 Minutes that President Trump “has repeatedly condemned racism and bigotry in all forms.” https://t.co/HmucF1z6zg pic.twitter.com/N5RlRfHoA9

“Do you believe President Trump is a racist?” Cooper asked.

“When you look at the words that he uses, which are historic dog whistles of white supremacy,” she said.

“The president certainly didn’t invent racism,” she said. “But he’s certainly given a voice to it and expanded it and created a platform for those things.”

And ignorance is the perfect word for her.

In another segment of the interview Ocasio-Cortez defended herself by telling Cooper that being correct on facts was not all that important.
Source: Federalist

2. She cites Trump’s response to the Charlottesville incident as an example of racism.

She’s referring to when the media claimed Trump said there were “fine” people on the side of the “Nazis and the white nationalists,” which is a complete lie that the media got away with…

3. She claims Trump “manufacturers crises” about what is happening with immigration

Does she think the billions of dollars that illegals cost U.S. taxpayers every year, the crimes they commit, the drugs the import, and the economic problems they cause are all “manufactured?”

And in case that wasn’t enough, here’s a little PaulJosephWatson to finish her off.

Alexandria Ocasio-Cortez says "no question" Trump is a racist.

Trump is a really bad racist. 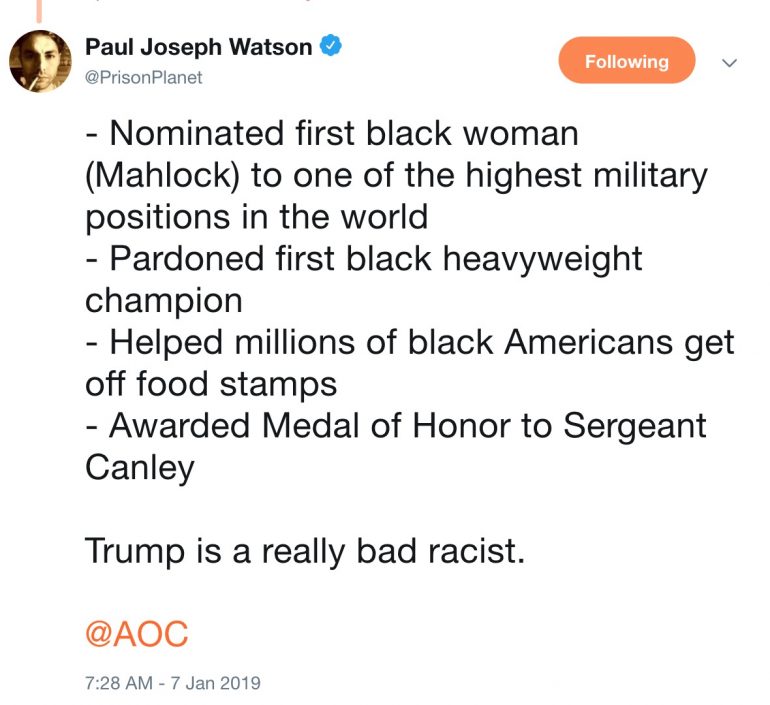 She may be good at harnessing the media, but eventually, people are going to notice she’s a little bit of an intellectual lightweight.

You’ve been elected AOC. Maybe it’s time to read a book. Something by Sowell, perhaps, to get you started.

In the meantime, we’ll enjoy those record-breaking jobs reports. The ones that are elevating the wealth and job prospects of everyone in her Intersectional hierarchy pyramid, whether they voted for him or not.

Because unlike HER socialist policies — Trump’s work. They gave us one helluva ride in the 80s, and they look like they could do it again.