The Democrats aren’t budging to reopen the government, but their buddies the Lobbyists are still hard at work with them in Sunny Puerto Rico.

While Trump hunkered down in DC, canceling not only his Christmas/New Year’s Vacation and scheduled travel plans to Davos while the Government Shutdown plays itself out, thirty Democrats (and their families) were living it up in Puerto Rico.

Sarah Sanders didn’t mince her words or hide her contempt.

Keep this answer in mind next time they shed their crocodile tears for the poor downtrodden and afflicted workers suffering under the shutdown.

Democrats in Congress are so alarmed about federal workers not getting paid they’re partying on the beach instead of negotiating a compromise to reopen the government and secure the borderhttps://t.co/zpJypJ2Slq

Did we mention that their ‘fact-finding’ mission (which included taking in a SPECIAL showing of the musical ‘Hamilton’) was also attended by Lobbyists?

It’s a ‘seaside resort’ with rooms running about $429 a night.

Meanwhile, DC is shut down, and President Trump hunkers down in DC, ordering Big Macs for his own invited guests — with his own credit card, until Pelosi is willing to negotiate an answer to Trump that’s more nuanced than her party’s long-overused answer of “F*** You”.

And did we mention the Lobbyists?

There are one hundred and nine of them — and business executives (which, let’s be honest, amounts to the same thing, really) were listed. A sampling:

PHRMA? Would they qualify as part of the ‘big pharma’ we keep hearing them warn us about?

The Democrats were spotted doing some ‘fact-finding’ on the beaches:

Spotted: Sen. Bob Menendez on the beach at a resort in Puerto Rico on Day 22 of the partial government shutdown. Reports say dozens of Dems are in PR for the CHC BOLD PAC winter retreat — including meetings on Maria cleanup, and a party with PR’s “Hamilton” cast. pic.twitter.com/6FaBYKPo4L

At least the poor woman the Senator from New Jersey is leering at seems to be above the age of consent.

Although, it’s surprising Senator ‘Hung Jury’ would dare venture so close to the Dominican Republic after the ugly allegations that were leveled against him about what supposedly happened when he went there.

What IS it about those NJ Senators, anyway? 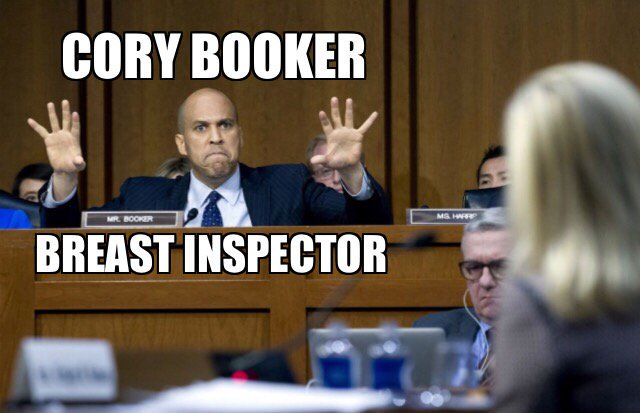 Wish we could claim credit for that image, but someone else on the Interwebz came up with it.

Whoever it was had some fun mashing up Booker’s ‘stealing second’ story with his Sparticus Jazz hands.

So, the Democrats ran off to play while the President stayed in town, ready to sit down with anyone ready to negotiate a reopening of the government in good faith.

And if we have to wait for them to act ‘in good faith’… the Democrats may have time to fit in a few more junkets with a few hundred more Lobbyists.

Those Federal employees they trot out as props and our Border security just aren’t as big a priority as meeting with corporate executives from Facebook and Big Pharma.