Her story is single-handedly crumbling the carefully-manicured myth that no one culture is any better than another.

We have bacon, they have burkas. Suprise, suprise … bacon is better.

It turns out that the freedoms 18-year-old Rahaf Mohammed — who very publicly renounced Islam and fled the subsequent wrath of both her family and her country — now enjoys in the West are better than life as she had it back home.

For one thing, she doesn’t have to obey somebody else’s idea of a dress code. In this photo, for instance, she’s wearing a dress. How “scandalous”.

But even more scandalous than that, she’s eating BACON for breakfast.

Ok, some will point out it is Canadian back bacon, just a little different from what you’d but on a cheeseburger. It’s still yummy. And it’s still pork.

THAT is the point. Here in the West, she’s free to eat it, if she chooses.

And she seems to have loved it. 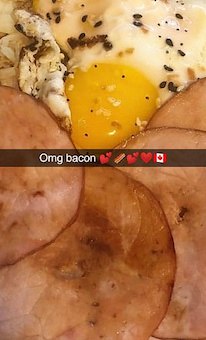 On her First-Class flight to freedom, she had another forbidden food — wine.

Oh, and as an added bonus — there is still one other freedom she’s enjoying.

In the West, becoming an ‘apostate’ by renouncing Islam doesn’t carry a death sentance.

Such freedom is an ‘oversight’ they’re trying to ‘correct’ in places like the UK. But for now, it’s still the majority position in most Western Democracies.

The left will have to be careful with wonderful stories like hers. It paints them into the corner of realizing that maybe something about the West really IS better than the other options… and worth preserving.