The Covington Catholics are just the latest in a long set of data points creating a bigger picture… the Left HATES traditional religion.

With a few exceptions — the ones they can use to conveniently support their attempt to erode traditional beliefs — the radical Left hates religious expression. 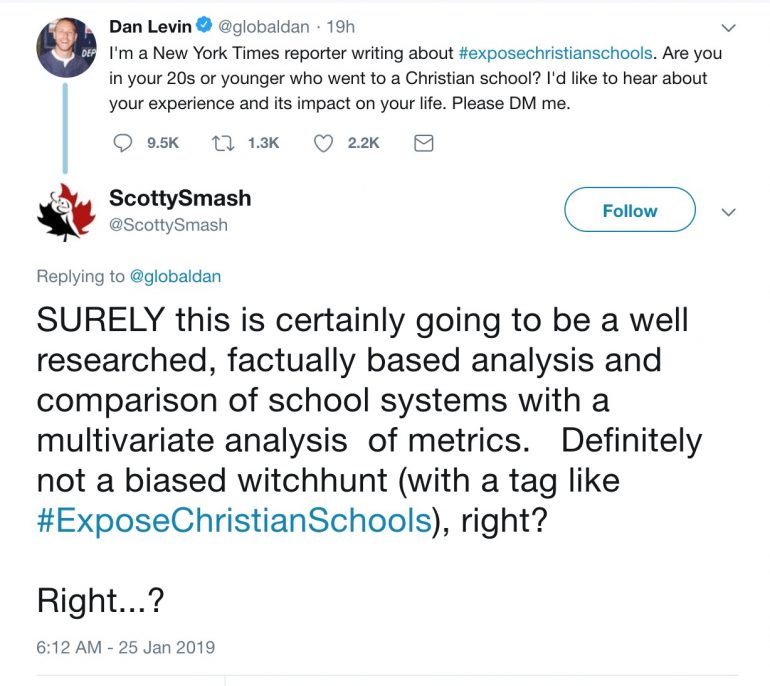 Levin’s Instagram posts include lots of photos of marijuana and some screenshots of his New York Times articles about how the youth are turning to the left politically. That bro is woke.

Now under public scrutiny, he’s walked that back with another tweet claiming he’s interested in GOOD experiences as well as the bad ones. How magnanimous of him.

If your religion is driven by philosophy, rather than a deity, like Buddhism, you’re no threat, and the left is your BFF. The Dalai Lama is one of the few religious leaders the left even pretends to like.

If your religion is pantheistic and doesn’t hold to any traditional view of a supreme God — like Hinduism — you’re cool, too. Like a butterfly outside their window, you create no obstacle to their larger goals.

Islam is openly hostile to Christian and Jewish claims and has been accepted as a potentially powerful ally against a common foe, despite a few core beliefs that might otherwise be quite upsetting to the left.

How do they look themselves in the mirror when siding with an ideology that stones women for having been raped, who have religious permission to beat their wives and a nasty habit of throwing homosexuals off of tall buildings?

Simple: the ends justify the means. Besides they’re the next big voting block for a group that chiefly concerns itself with gaining and holding power.

Conservative voices have started pushing back.

In light of #exposechristianschools, I'm just going to double down on this https://t.co/3rGQw33x3D

Anti-religious bigotry has hit the mainstream, particularly among Democrats. Senator Kamala Harris (D., Calif.) declared her candidacy for president this week, just after attempting to discredit judicial candidate Brian Buescher by asking him about his membership in the Catholic Knights of Columbus — a group in which Democrats including John F. Kennedy have held membership. Just five years ago, New York governor Andrew Cuomo suggested that pro-lifers weren’t welcome in New York. In 2015, Hillary Clinton stated that “deep-seated cultural codes, religious beliefs, and structural biases have to be changed” based on the need for more liberal views of conduct. During the 2016 election, WikiLeaks released emails showing that John Podesta had agreed with a 2012 push against “a middle ages dictatorship . . . in the Catholic church.”

You might add to that list the fact that Bernie Sanders tried to use a nominee’s religious belief to disqualify him, contrary to legal prohibitions of such a religious test, and Feinstein infamously told a Catholic nominee that the ‘dogma lives loudly in you’.

That’s among an almost endless list of other leftist anti-religious targets, including Obama taking the Catholic ‘Little Sisters of The Poor’ to the Supreme Court over birth control.

ClashDaily generally, and this writer specifically has been raising this point since the beginning.

Within my lifetime, the “religious right” had a supposedly theocratic agenda and so were “unfit” for public office. Public opinion shifted to support secular candidates. (Even though the only real theocratic group I know of are pro-Sharia Muslims. Last time I checked the Left was still cool with them.)

So now we have governments filled with secular decision-makers. Have our freedoms improved? Well sure! Now we’ve got plenty of — well — nope, sorry. Just red tape.

…We have a government convinced it knows — better than we do — what’s best for us; and is determined to act against our wishes to enforce it.

It seems the very people that promise freedom use taxes to extend the reach of government, so they can punish or reward specific behavior. This has the effect of re-engineering society against the citizen’s will, and at his own expense. See a resemblance to China’s old “bill for the bullet” policy? Yeah, me too.

There is nothing — nothing! — liberal or magnanimous about bullying and coercion. “Liberal” is a misleading name for a group that’s increasingly militant. Want a word to accurately describe people using the brute force of law to socially engineer people against their will?

Let’s coin a new word for that. Maybe “impuritan”.
Read the Full Article (written in 2012) here:
Don’t Call Them Liberals

What are we really expecting from the party that once booed God at their National Convention, and scores 0-for-10 in the Ten Commandments?