There are some realities that not even being a media darling can protect you from!

The Political Left has been radicalizing, and fast.

Not only was Bernie Sanders *this* close to taking the DNC primaries (and probably would have done so if ‘if it weren’t for those meddling kids’ putting their thumbs on the scale for Hillary), but their base is embracing principles that are completely unmoored from historical American values.

There is literal opposition to American sovereignty (open contempt for ICE and border enforcement), and there is a conscious embrace of exactly the sort of ideas that would have made Vladimir Lenin’s heart swell with pride.

Anyone can look at international events to see the real-time unfolding of where a vision like the one she’s pitching takes a nation.

And Trump is calling them out on it, by explaining exactly what happened to once-wealthy Venezuela, where their currency is worthless and they’re eating stray animals off the street.

Ocasio-Cortez was a Bernie Sanders devotee and literally a member of ‘Democratic Socialists of America’. The hard-Left site Vox tried to spin that group as a good thing this way, with an aim of ‘clearing up misconceptions’:

What does DSA believe in?

Like most socialist organizations, DSA believes in the abolition of capitalism in favor of an economy run either by “the workers” or the state — though the exact specifics of “abolishing capitalism” are fiercely debated by socialists.

…In practice, that means DSA [members advocate] ending private ownership of a wide range of industries whose products are viewed as “necessities,” which they say should not be left to those seeking to turn a profit. According to the DSA’s current mission statement, the government should ensure that all citizens receive adequate food, housing, health care, child care, and education. DSA also believes that the government should “democratize” private businesses — i.e., force owners to give workers control of them — to the greatest extent possible.

…While both DSA and some left-wing Democrats agree that the government should provide universal health insurance, DSA ultimately wants to nationalize hospitals, providers, and the rest of the health care system as well. While both will work toward higher taxes on Wall Street, DSA ultimately wants to nationalize the entire financial sector. While left-wing Democrats believe in criminal justice reform, some DSA members are calling for the outright abolition of the police and prison systems. While both DSA and left-wing Democrats support reforms to get money out of politics, some in DSA see capitalism as fundamentally incompatible with genuinely free and fair elections. In practice, however, the two wind up ultimately taking the same positions.
Source: Vox

Does her disdain of Billionaires and those aggressively radical policies she dreams about suddenly make more sense?

She is one of a generation who grew up with the Cold War as a historical footnote, perceived as no more serious a threat than the Black Plague or Famine.

There WERE no East Germany or Checkpoint Charlie in this generation’s living memory. So the ideas that DROVE the Cold War don’t seem any more fearsome than a Bond Villain.

For all the talk about ‘threats to Democratic Process’ and ‘tyranny’, they still haven’t learned the key to why such regeimes cannot succeed. Human nature.

The critical failure point of this system every time it’s tried — turning Resource-rich Venezuela to a nation where the average weight of people has dropped something like 20 pounds since the crisis hit, and people are eating their pets and fleeing en masse is exactly the promise of free things and the scapegoating of industry that generated wealth creation in the first place.

And when power is concentrated in few hands? You get the leader’s family becoming among the wealthiest people in the entire world. You get nepotism elevating incompetent hacks to positions of power — a former Bus Driver running Venezuela into the ground, for instance. You get more and more desperate policies nationalizing more and more corporations to solve supply and demand problems that were GENERATED by the abandonment of market principles — ‘free’ health care in hospitals without even the most basic of medical equipment or medicine is cold comfort.

And it always ends the same way — with harsh crackdowns on whichever poor sap gets identified as being ‘responsible’ for the Government’s failures, or who ‘opposes’ progress and the ‘greater good’.

Right after Trump and Pence joined other world leaders supporting Venezuela’s people in a Popular Uprising agaist a murderous thug who has sent the military to kill his own protesting citizens, Cortez is already on record backing … the despot. 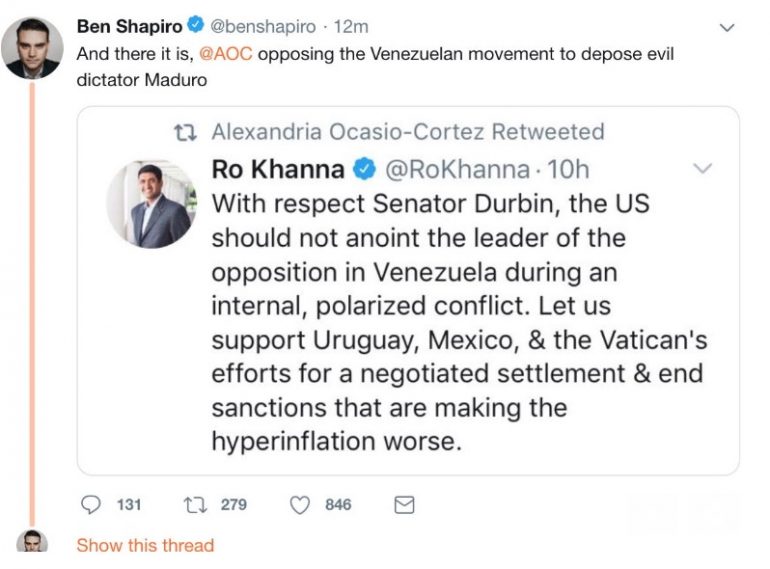 Should this surprise anyone? She’s a disciple of Bernie Sanders, who had this to say on his official government website in 2011.

These days, the American dream is more apt to be realized in South America, in places such as Ecuador, Venezuela and Argentina, where incomes are actually more equal today than they are in the land of Horatio Alger. Who’s the banana republic now?
Source: Bernie Sanders

And while the Leftists are looking for a way to make Venezuela not seem like another Socialist dream that has disproven their bankrupt ideology, the President is taking a very different approach, one that respects the voice of their people:

Today, I am officially recognizing the President of the Venezuelan National Assembly, Juan Guaido, as the Interim President of Venezuela. In its role as the only legitimate branch of government duly elected by the Venezuelan people, the National Assembly invoked the country’s constitution to declare Nicolas Maduro illegitimate, and the office of the presidency therefore vacant. The people of Venezuela have courageously spoken out against Maduro and his regime and demanded freedom and the rule of law.

I will continue to use the full weight of United States economic and diplomatic power to press for the restoration of Venezuelan democracy. We encourage other Western Hemisphere governments to recognize National Assembly President Guaido as the Interim President of Venezuela, and we will work constructively with them in support of his efforts to restore constitutional legitimacy. We continue to hold the illegitimate Maduro regime directly responsible for any threats it may pose to the safety of the Venezuelan people. As Interim President Guaido noted yesterday: “Violence is the usurper’s weapon; we only have one clear action: to remain united and firm for a democratic and free Venezuela.”
Source: White House

Those are two VERY different visions of the future, aren’t they?