‘Alex From The Bronx’ is using language unbecoming for a Member of Congress. Will she be disciplined for it?

It all began when someone on Reddit posted what they claimed to be a nude photo of the freshman Congresswoman.

As an aside… WHY?!?! Conservatives don’t need to create scandal for this woman, just report what she actually says. Her policies are ridiculous and she can’t defend them, on her first day in Washington, she joined a protest in front of Nancy Pelosi’s office, and she has been told to sit down and shut up by seasoned Democrats and even the loudest leftists in The View coven.

UH OH: Whoopi and Joy Behar tell Alexandria Ocasio-Cortez to 'sit down and learn her job' before she "starts pooping on people and what they've done."

BRB grabbing popcorn… this is far from over. pic.twitter.com/N5bT3DjHuw

It’s also interesting to note that the Media(D) and AOC herself seem to think that conservatives are ‘obsessed’ with her. Well, everywhere you turn, the Media(D) is touting her as the Next Big Thing™ to hit Washington. And she’s been pretty darn clear that she’s ignorant on foreign policy, has lied about her roots, and is a high-taxes, nanny-state, big-government socialist, and we bloody well hate that.

So, while the Media(D) lifts her up on a pedestal and praises her ingenuity to put forward socialist policies that have consistently failed and/or are currently failing in the socialist utopias, we’ve got to be real about why they won’t work. We’ve also got to remind everyone that just because she’s got charisma and works hard knocking on doors and meeting people, that doesn’t mean that her ideas are good ones.

She has appeal. She managed to win against a strong Democrat incumbent when she was just 28, and is now being called on to raise money and stump for other Democrats. She shouldn’t be underestimated even if she is the voice of Generation Dumb@ss.

Her biggest problem is that she keeps opening her mouth and inserting her foot, then opens it again only to change feet.

When she spoke to the Washington Post about the fake nude photo, she put both feet in her mouth simultaneously.

Ocasio-Cortez, 29, was talking to the Washington Post about how frequently she is covered by conservative media news outlets when she used the phrase.

Now, in an ironic turn of events, right-wing media is once again up in arms about something Ocasio-Cortez has said.

Ocasio-Cortez was specifically discussing a fake nude photo of her that circulated on right-wing media when the phrase came up.

The photo, which was initially posted on Reddit, showed a woman’s feet propped up against a bathtub. Some claimed they could see Ocasio-Cortez’s naked body in the reflection of the faucet.

But her comment to the Washington Post claiming that conservatives have no ammo yet included an unbelievably crude phrase — one that ‘Alex from the Bronx’ should have been aware of and avoided.

‘You can tell that they’re getting into hysterics because now you’re getting into my actual body, which is definitely crossing a level,’ Ocasio-Cortez said of the photo.

‘I’m six days into the term, and you already used all your ammo. So enjoy being exhausted for the next two years while we run train on the progressive agenda.’

Out of ammo, are we?

Well, hon, you just keep opening your mouth and reloading for us.

For an urban chick from the Bronx, she used a rather graphic phrase, ‘run train’.

If you’re unaware of what that means, Urban Dictionary explains:

The top 5 definitions are all similar.

That was a poor choice of words.

It’s only when you get to the sixth definition that there is a gaming reference, but the first still suggested something sexual in the hashtags: 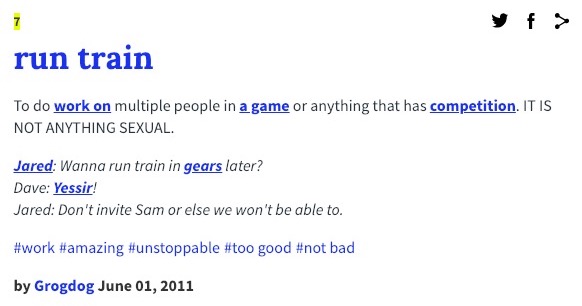 It seems that the vast majority of definitions are similar to the first three, and not about gaming at all.

Alexandria Ocasio-Cortez has made much about her blue-collar, urban roots, (which is disputed), but shouldn’t she have known better as a young woman than to use that phrase?

For those that are not living in New York’s 14th Congressional District, here’s her pretty slick campaign video:

It's time for a New York that works for all of us.

On June 26th, we can make it happen – but only if we have the #CourageToChange.

It's time to get to work. Please retweet this video and sign up to knock doors + more at https://t.co/kacKFI9RtI to bring our movement to Congress. pic.twitter.com/aqKMjovEjZ

She ran on a pretty hard-left socialist agenda, and she won.

Her statement to WaPo seems to imply that she’s willing to push an unwanted Socialist agenda onto an unwilling American electorate.

I’m not the first to make this connection.

Because Urban Dictionary is a crowdsourced dictionary open for anyone to add in a definition which is voted on by volunteer editors to publish or not publish, after AOC’s statement to WaPo, and this showed up: 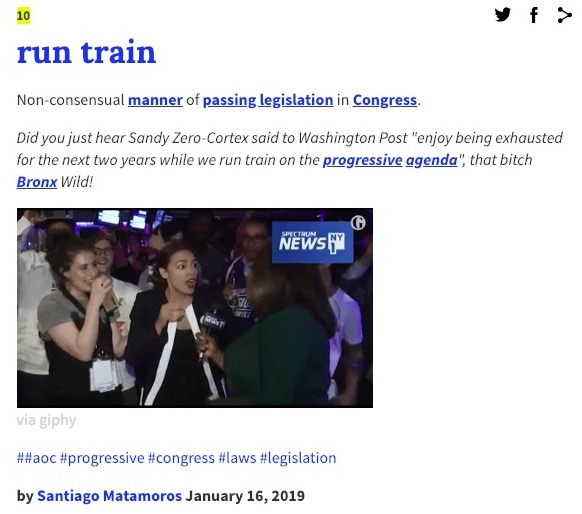 What happened to ‘deriving their powers from the consent of the governed‘?

I thought ongoing consent was a big deal these days?

Chet Hanks no longer an Atheist!
March 7th, 2021 The Real Side With Joe Messina

Stimulus Checks Will Go to Criminals & Illegals After Dems Reject GOP Attempt to Stop It
March 6th, 2021 Flag And Cross