If you want to see Democrats torn between winning their Shutdown Showdown and saving their skin for 2020, show them this meme.

We can’t take credit for this meme, it was posted on Instagram by the user ‘dc_draino’.

But we sure can agree with and promote the hell out of it. (And you can too!) 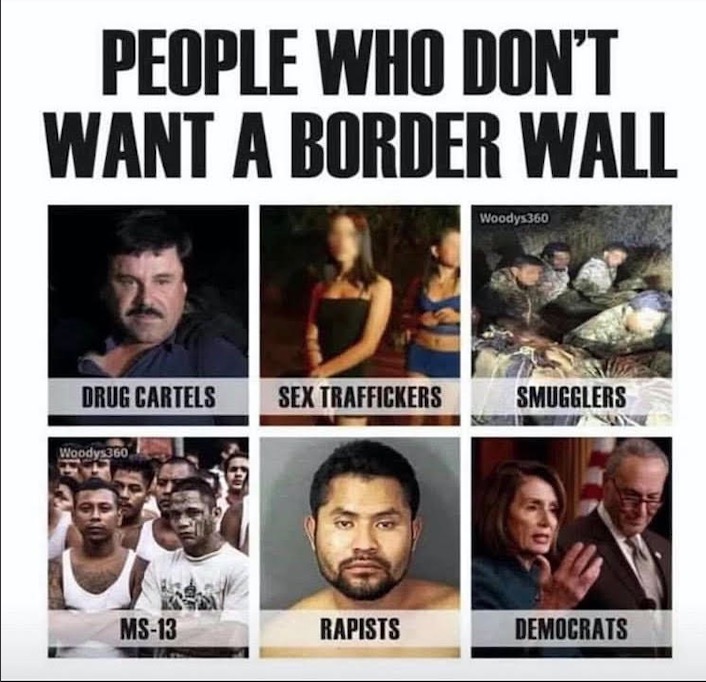 Do rapists that prey upon the vulnerable border-crossers want open borders? Yes.

They even said so in a memo of their own.

Why would anyone, of any party POSSIBLY be in favor of open borders?

A federal judge in New York has ruled against the Trump administration’s decision to add a citizenship question to the 2020 census. — Source: NPR

What difference would that make? Oh, nothing much, just a permanent expansion of the Left’s political power base.

One electoral news site gives us an explanation of what counting illegals does to the electoral college numbers, including an interactive map:

Here’s how the electoral map would look, based on 2013 Census estimates, and using 2016 election results, if only citizens were counted. […]

As we found at the time, “11 states would be impacted. The big loser would be California, which would see 4 of its 55 electoral votes trimmed away. No other state was impacted by more than one electoral vote. FL, NY and TX would lose one each, while seven states (LA, MO, MT, NC, OH, OK, VA) would gain one.” In terms of the 2016 election, Donald Trump would have won an additional four electoral votes, giving him a 310-228 victory, vs. the actual 306-232 result.*

“Fudamentally Transforming,” indeed. Into their own perpetual power base, whether we want it or not.

Just like the Big Tech Companies said they would in the article endorsed by their own management:

But we’ve got someone in office who’s putting a stop to that plan.

Mr. President, America Stands with you … Rock On!