This Social Justice Warrior was triggered by this photo for an absolutely ridiculous reason… and he defended his offense. Here’s the 411.

An opinion contributor to Arizona Central wrote a piece on his shock at a ‘problematic’ photograph at a downtown Phoenix restaurant.

Rashaad Thomas, whose bio on AZCentral says that he is a ‘husband, father, a veteran of the U.S. Air Force, poet and essayist.’ (Note that he, like a psychopath, doesn’t use an Oxford Comma!)

In a piece titled, ‘Phoenix restaurant says this is a photo of coal miners. But I see offensive blackface‘ he writes about how he stumbled across the ‘oppressive’ picture as he was attending a holiday party some weeks ago.

He was taken aback. So, he asked some other people what they saw in the photo.

I asked the waitress to speak with a manager. Instead, I spoke with a white restaurant owner. I explained to him why the photograph was offensive. Evidently, someone else had made a similar comment about the photograph before.

Yet, the photograph remained on the wall. He said he would talk to the other owners and get back to me. While leaving, I asked him had he spoke with the other owners. He had not spoken with them, but mentioned Google said it’s coal miners after work.

Note that Thomas invokes race in each person that he speaks to and makes sure that he includes that in his essay.

Here is the photo that got Thomas all riled up. 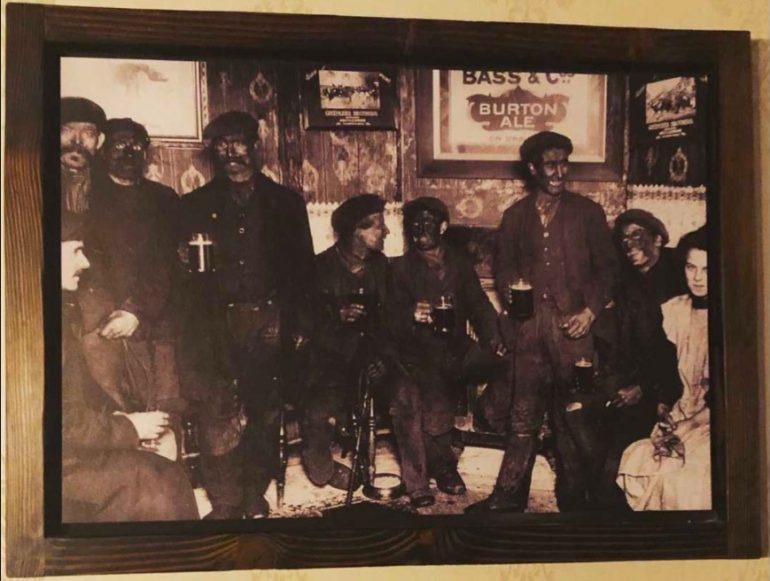 He took offense to that.

He even admits in his piece that it’s just a photo of coal miners.

Fact: The photograph shows coal miners’ faces covered in soot. The context of the photograph is not the issue.

Thomas says that the actual context of the photograph is ‘not the issue’ — it’s the perception that is the issue.

He then talks about how students at Arizona State University don black paint for the Sun Devils’ Blackout Games, and that people are ‘encouraged’ to put on blackface during Halloween. Really? I’ve never been encouraged to do that or heard of anyone being told, ‘You know what would be a great costume? Darkening your skin to appear like you’re a different race!‘ I have literally never heard that — or anything remotely like that — ever in my entire life.

Thomas then says that the meaning in art is not given by the artist, but rests on the interpretation by the viewer of the art. Well, he doesn’t say it that eloquently, but that’s the basic gist.

Art can be a trickster. People view artwork once and subsequently see something different.

Viewers cannot determine the intention of an artist’s work. Art also exposes society’s blind spots. Blackface is only a glimpse of a larger issue. The larger issue is the lack of representation of marginalized people and their voices in Phoenix.

He says that you see one way at first and ‘subsequently see something different’, it reveals that when he first acknowledged that it was simply a photograph of coal miners after work, and then saw ‘blackface’ later it may be an indication that Thomas is an offense-monger looking for racism under every bush. ‘Equality activists’ keep talking about ‘white fragility’ as a reason that white people just cannot come to grips with the racism that they unwittingly take part in, but not a word is ever mentioned about ‘black fragility’ that sees racism in an innocent photo of blue-collar miners. Just a thought.

He then complains that when he goes to an art museum, he feels as though he is excluded because he’s not represented in the curated collection of art. Is he serious? Museums bend over backward to include special exhibits to focus on art by ‘marginalized groups.’ Not only that, in the push to move culture ever-leftward, there’s even an entire section about ‘Social Justice’ on the American Alliance of Museums website.

The photo of the men drinking beer in a pub after working in a freaking coal mine was a ‘threat’ to Thomas, apparently.

Here I was thinking it was just a decoration on a wall of a restaurant. This bro must be one helluva buzzkill at one of those kitschy family places with surfboards, old gadgets, and vintage signs on the walls. Heaven forbid he enters a place with old Hollywood movie posters! The horror!

At the downtown Phoenix restaurant, my concern that the photograph of men in blackface was a threat to me and my face and voice were ignored.

A business’ photograph of men with blackened faces culturally says to me, “Whites Only.” It says people like me are not welcome.

The operators of that downtown restaurant can choose to take the photograph down, leave it up or create a title card with an intention statement. No matter their decision, I think the photograph should be taken down — sacrificing one image for the greater good.
Source: Arizona Central (Emphasis Added)

Did he just suggest that having the photo of the coal miners is tantamount to Jim Crow?!

Thomas is offended by blue-collar workers grabbing a beer after working a long shift in a coal mine.

He’s demanding that the owners of the business remove the photo because he is offended.

Don’t you love it when leftists say that? The common answer to the pro-life argument nowadays is, ‘if you don’t want an abortion, don’t get one‘ which completely sidesteps the central moral issue of ending an innocent life with the blessing of the state.

By the same token, if Thomas doesn’t like the photo, he should just not look at it.

That’s just weird because Rashaad Thomas is not just a contributor to Arizona Central, he’s also a poet. I’d normally slip in a bit of a dig here like, ‘he’s a poet, that may explain his hypersensitivity,’ but I’ve known a few male poets in my time, and despite the stereotype, some of them are pretty badass.

But, let’s be frank, Thomas isn’t a great poet. 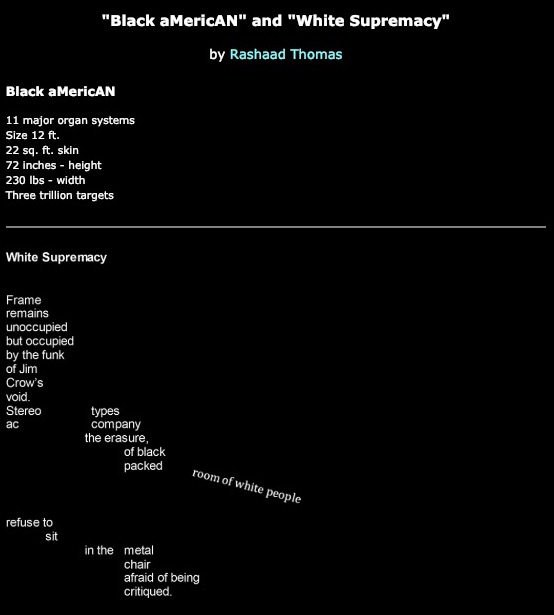 In case you can’t read that, here is the text:

Well, it means he’s obviously racist against white people. (Don’t give me that Newspeak Critical Race Theory definition of racism as ‘privilege+power’, that’s nonsense.) I can say that with confidence because, as Thomas said, art is not about the artist’s intent, but what the viewer takes from the art, amirite? (Though, I could easily argue that there is no difference in what Thomas intended and the message received by the reader/hearer of his poem.)

But, Rashaad Thomas shouldn’t take the claim of racist personally — it’s just his art. By his standards, his poetry should be removed immediately because it causes offense, right?

Rational people won’t demand censorship of Thomas’s ‘poetry’ because, as offensive and racist as it is, he has the right to speak and produce art. I, also, have the right to criticize him.

And that is the main difference in our opinions.