The Left was thrilled to have these two as part of the ‘fresh new faces’ of the Democrat party. Well, popular folk wisdom does warn us to “be careful what you ask for”.

Remember how they were all desperate to get away from the reputation of being nothing more than a mutual admiration club of stuffy old has-beens who will stubbornly hold onto power for its own sake until the day they die?

The prominent faces of the party included the likes of Hillary and Biden; Maxine Waters and Bernie Sanders (!). Which is weird, since he isn’t even a Democrat.

While we are pleased to announce some pretty solid fresh faces on the Right:

Dear CNN: Our Youngest Black Legislator Is Pro-Life, Pro-God & Pro-Wall – Is That ‘News?’

They added a few of their own. They found the likes of Alexandria Occasio-Cortez (also known as ‘Occasional Cortex’, or ‘She Guevera’) and Ilyan Omar. 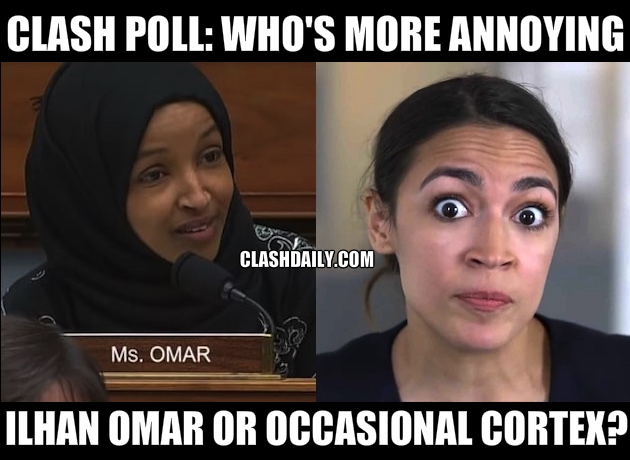 AOC had been given a free ride from the press which helped her generate the biggest social media following of anyone in politics except for the President himself. She has a knack for using it, too, which helps her connect with a younger audience better than, for example, Pocahontas’s disastrous grab me a beer social media moment, or Kamala Harris claiming to have smoked up to music that still wouldn’t be recorded for years to come.

Cortez has shown herself skilled at engaging the audience. But not so much at engaging her brain.

Some of her ‘finer’ moments:
The world will end in 12 years because of climate change.

She introduced a particularly vulgar usage of the word ‘train’ into the national conversation.

She called Illegal aliens from Mexico ‘more American’ than President Trump, and defended her enormous and recurring factual errors as inconsequential. ‘Morally right” even if they were “factually incorrect”.

And then she blew up her own party by introducing the Green New Deal.

She got embarrassed by the mocking laughter and ‘disappeared’ it, or tried to, but the Internet Is Forever. Even Democrats shot it full of holes. She and her defenders accused Republicans of lying about it, even though the original document proved otherwise. Now ‘Cocaine Mitch’ McConnell is having them all go on record for or against with vote on it.

That’s ONE of their fresh faces that’s been filling up headlines. The other one is a raging anti-semite who allegedly married her own brother in an immigration fraud scheme.

Here are a few recent screwups SHE has made:

In her role on the House Foreign Affairs Committee.
WATCH: Rep. Ilhan Omar Questions A Reagan Official And It Gets NASTY

Muslim Congresschick Gets Asked About Her Anti-Semitism And Derails AGAIN

When reporters tried to call her out, we got to see just how much she loves the Free Press that keeps everyone accountable She doesn’t mind when it keeps OTHER people accountable. But when the questions come at her? Not so much.

Omar: “Are you serious? What is wrong with you?”

Manu Raju: “I’m asking you a question about your tweet…saying [Trump] trafficked in hate”

Omar: “Yes I tweeted, and there’s a response. You can run that. Have a nice day” pic.twitter.com/pR7fxederX