Socialism has failed every time it’s been tried — even at Panera.

Back in 2010, Panera Bread CEO, Ron Shaich gave a Tedx Talk in St. Louis and touted his new plan, Panera Cares Cafes that were based on a ‘pay-what-you-can’ model. He said, ‘in many ways, this whole experiment is ultimately a test of humanity. Would people pay for it? Would people come in and value it?‘

Apparently, the answer is, ‘No’.

ClashDaily has covered the failing of the Panera Cares just 9 years after the launch of the program, and now, the last location in Boston is about to shut its doors.

The company says its final Panera Cares location in Boston will close Friday after six years, and that it is helping employees find jobs at other locations.

Panera opened its first donation-based community cafe in Clayton, Missouri, in 2010. The model aimed to raise awareness about food insecurity by offering meals at a suggested donation price.

The initial idea was that there would be no prices listed, but would include the full Panera menu. This was adapted to a ‘suggested donation’ amount listed where some patrons would pay more and others would pay less.

One problem was that many patrons felt ‘shamed’ if they were unable to pay the full ‘suggested donation’ amount.

Although the stores were supposed to be self-sufficient, the company revealed that the Panera Cares locations were bringing in 70 to 80 percent of the revenue of the traditional Panera Bread locations, which made them non-viable.

Luxembourg-based investment firm JAB Holding Co, which bought Panera in 2017, said in a statement: ‘Despite our commitment to this mission, it’s become clear that continued operation of the Boston Panera Cares is no longer viable.

‘We’re working with the current bakery-cafe associates affected by the closure to identify alternate employment opportunities within Panera and Au Bon Pain.’

Shaich stepped down as CEO in January 2018, around the same time that the flagship Panera Cares location closed its doors.

Those ‘regular customers’ that Shaich spoke of in his Tedx speech now have to find a new haunt.

I’ll bet Panera wishes they had gone with a dollar menu like the other restaurants, eh? Then those customers would still be grabbing a bite to eat at a Panera, and the employees wouldn’t have to go looking for a new job.

Someone should page the new Democrat Darling and tell her that socialism doesn’t work.

Don’t let your kids grow up to be like AOC! Tell them what they need to hear: 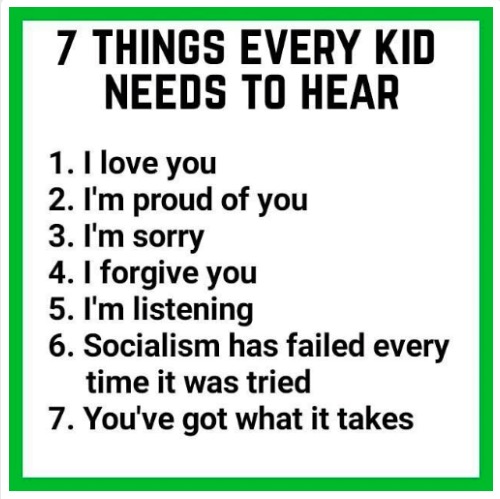 BREAKING NEWS Out Of Oklahoma- THEY GOT HIM!
AFF

Dumb-Dumb De Blasio Makes NYC First In The U.S. To Require Proof Of Vaccination For Dining
The Lid