What? Did they think they were busting Bruce Wayne or something? There are a finite number of police resources, and THAT is how they decided to allocate them?

A lot about this story seems more than a little weird.

Stone had already indicated an intent to cooperation with Mueller through his lawyers, so what is it that supposedly justifies the show of force seen in this video?

Exclusive surveillance video from inside the FBI raid and arrest of Roger Stone, a former presidential adviser and longtime friend of President Trump.https://t.co/DbbaocLJYH pic.twitter.com/cneeMrPxqG

That depends on who you’re asking. The political left, who are cheering each and every move Mueller makes as though it were a solid punch in the President’s face, see nothing wrong with it. Some even played the ‘cops are racist’ card while mocking the treatment he got.

That’s not the only explanation. Here’s an interesting detail to note about the guy who got the ‘scoop’. (See the subtweet.)

This is the weasel who was lying in wait when Roger Stone's home was raided .

Curiously , before his current stint as CNN 'reporter' , he was Special Assistant to disgraced FBI Director James Comey . pic.twitter.com/aqwbXNlbRg

It IS still illegal to leak details about an arrest like this, right?
#AskingForAFriend

Is he right about this being to intimidate Stone, or to sway the Jury?

If he was such a threat, as the Left supposes, how did he walk out a free man the same day?

Not all theories are serious, even if they offer some perspective and a reminder of what it can look like when authorites overreach:

They went after Roger Stone like he had Elian Gonzalez in his house. #RogerStone

Remember… if you forget an email from months or years ago when talking to federal investigators they’ll send heavily armed men to get you. #RogerStoneDidNothingWrong pic.twitter.com/XIkBihRvS0

There is one Other theory.

Was there any OTHER news… especially if it’s anything concerning the Spygate drama, or players he might want to protect … unfolding around that same time?

Because a dramatic arrest like this one is an effective way to ‘change the channel’ in the news, if people are daring to discuss the ‘wrong’ issues.

And can you read the shirt he was wearing when arrested?

“Roger Stone Did Nothing Wrong”.

Gotta give the guy some credit there.

He sure knows how to get his message out. 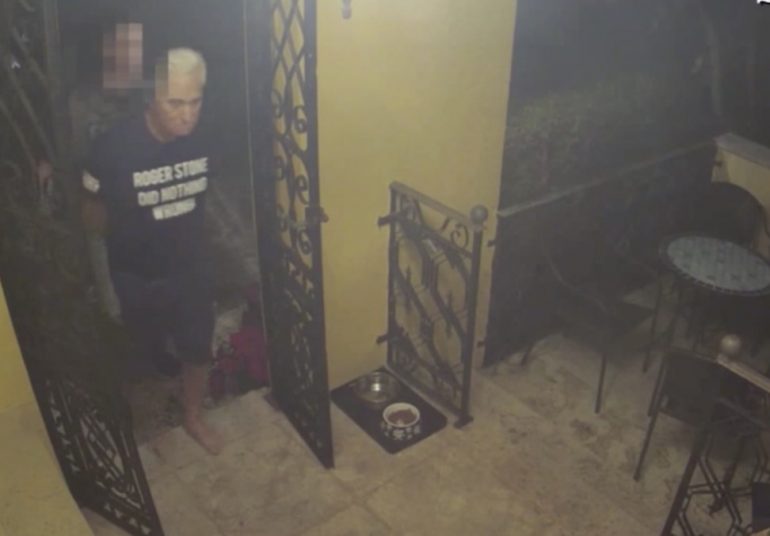