Seven years ago, I wrote a position piece on Afghanistan for the Joe Coors for Congress campaign in Colorado. In it, I listed the following statistics:

This week, former Marine and current Senior Contributor to The Federalist Jesse Kelly wrote the following in his opposition to keeping US troops in Afghanistan:

The U.S. Senate cannot agree on anything. They are so mired in partisan gridlock, a resolution declaring the sky to be officially the color blue would fail along party lines. But there is one thing and one thing only they agree on: 17 years of our troops dying in Afghanistan isn’t long enough.

By a 68-23 margin, the Senate decided we haven’t spilled enough blood, broken enough soldiers (mentally and physically), or spent enough money. All for a now-aimless conflict in a part of the world Americans don’t even care about.

What began as an attempt to hunt down Osama bin Laden has now become a generational conflict where sons are patrolling the same areas as their fathers did. This no longer a war. This has become a hopeless mission to tame a part of the world that has never been and will never be tamed.

Inevitably, this article will meet cries of, “We have to stop them over there before they come here!” Or, my personal favorite, “America must lead!”

First of all, scores of Americans have died on American soil from Islamic terror attacks since 9/11. So that “stop them there” argument has no facts to back it up.

Secondly, “America must lead!” is quite a statement. Maybe there’s even some legitimacy to it. But “America” is not very specific. What you’re really saying is,

“Someone else has to go immerse himself in the mud and blood so I can feel better about myself.”

Let us stop this. Let us revert back [sic] to an originalist foreign policy that lets America worry about America and Americans.

That’s not isolationism, as America must remain ever vigilant and ready to take on the evils of this world should they threaten her interests. Instead, it’s a foreign policy that focuses on neutrality, trade, and places a high value on the life of the American soldier. Let us finally send neoconservative interventionism to the death it wishes upon our troops.

For perspective, consider the countries where we have a military presence. 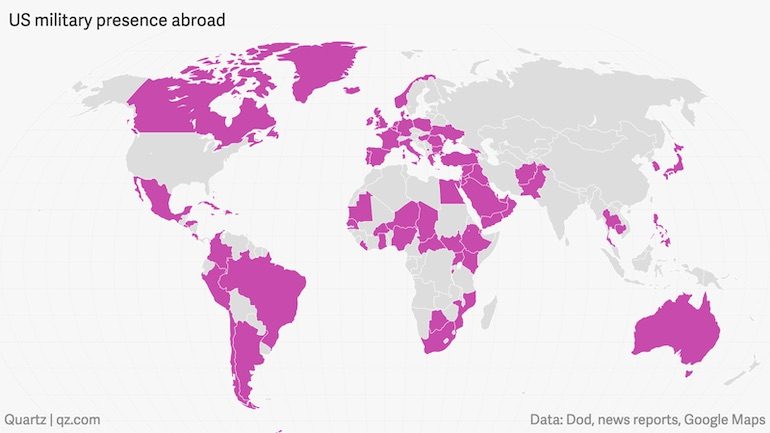 In other words, we’re everywhere. Is every base, installation, our outpost necessary? Unlikely, but there are national security benefits to spreading out; it easier to respond to events halfway around the world when we’re already halfway around the world. Evil exists and often targets America and Americans wherever they are, and I can’t think of a better deterrent than the US military.

Just as “no uterus, no opinion” compromises any debate on abortion, throwing out a blanket “if you haven’t served, shut up” or like edict has a similar effect. Jesse Kelly doesn’t go this far, but with his “Someone else has to go immerse himself in the mud and blood so I can feel better about myself” I think he discounts so many of us who love our service men and women and still hold carefully considered opinions about how best to approach national security.

So what do we do?

Years ago, upon seeing the massive coalition forces continue to overwhelm his own forces, a Taliban commander once told then-Canadian Chief of Defense Staff Rick Hillier, “You have the watches, we have the time.” It’s easy to see any Afghan consider his country’s situation and shrug his shoulders. Over the course of history, Afghanistan has seen enemies come and go, often with much less fervor than they entered. Their confidence derives from generational patience.

Leaving should be on the table but no timeline should be announced nor should our departure transpire as quickly as Vietnam where we abandoned our allies to die. My concern is after we leave, the same Islamists or their progeny will either prepare to attack us again, or provide sanctuary to someone who will. Judging from the massive mineral riches found less than a decade ago, Afghanistan will not be the nation of poor goat herders for long. Large Resources + Islam = Attack on America, at home or abroad.

More lives, limbs, and treasure. In any decision with this level of consequence, we must consider our risk tolerance and cost/benefit. Afghanistan is our longest and most expensive engagement. Staying there means while we may take on more casualties, we are in a better threat response position. If we stay, we don’t have to maintain the same depth and breadth of forces throughout the country.

Each option contains variances that can cross over each other. We can remove most of our troops but keep a human and machine intelligence contingency that would alert us to trouble, and forces stationed nearby in allied countries available to respond.

In any military engagement, we can’t have all or nothing, nor can we have a little here and a little there. Each scenario requires action based on the best intelligence available at the time coupled with the best fighting force the world has ever known.

May God guide our decision.