Rep. Ilhan Omar(D-MN) was questioned by reporters about her incredibly controversial tweets and it went horribly, horribly wrong.

The backlash from Omar’s tweets using anti-Semitic tropes was swift.

Anti-Semitism must be called out, confronted and condemned whenever it is encountered, without exception.

We are and will always be strong supporters of Israel in Congress because we understand that our support is based on shared values and strategic interests. Legitimate criticism of Israel’s policies is protected by the values of free speech and democratic debate that the United States and Israel share. But Congresswoman Omar’s use of anti-Semitic tropes and prejudicial accusations about Israel’s supporters is deeply offensive. We condemn these remarks and we call upon Congresswoman Omar to immediately apologize for these hurtful comments.

As Democrats and as Americans, the entire Congress must be fully engaged in denouncing and rejecting all forms of hatred, racism, prejudice and discrimination wherever they are encountered.

President Trump said that she should resign from Congress, or at the very least, from the House Foreign Affairs Committee.

President Trump on Rep. @IlhanMN: "Her lame apology, and that's what it was, it was lame, and she didn't mean a word of it was just not appropriate. I think she should resign from Congress." pic.twitter.com/6rbPUDdFuz

After the President’s comments on Omar, some journalists asked some basic questions and her response was rather curt. She smacked her gum and got visibly annoyed with the reporters.

REPORTER 1: What have you learned from your comments and the reaction to it?

OMAR: I’ve stated all of it in my statement.

REPORTER 2: Do you regret your comments, Congresswoman?

OMAR: I’m pretty sure that was stated in my statement.

REPORTER 3: Were you surprised by the criticism?

REPORTER 4: Are you worried about losing committee assignments?
OMAR: Absolutely not.

When questioned this evening on whether she was worried about losing “committee assignments” over her anti-Semitic tweets, Rep. Ilhan Omar said, “Absolutely not.” pic.twitter.com/4juYghwtCg

Remember that when Rep. Steve King(R-IA) made some statements to the New York Times that seemed to support white supremacy, he was stripped of all committee assignments immediately by GOP leaders. Rep. King has since pushed back claiming that he was deceptively edited in order to frame him as being a racist. Still, that might be too little, too late for the Republican that has made some questionable and a couple of quite awful statements in the past.

It is interesting to note that some of the torch and pitchfork mobs shouting about King’s alleged racism point to things like King wanting English as the official language of the United States, his staunch defense of Western Civilization, and his push to add a citizenship question to the census as proof of his bigotry. That last one is key because our electoral votes and House seats are based on the census and would give areas with high immigration — legal and illegal — more representation than those places without. Democrats have often criticized King’s position on this issue.

But Ilhan Omar is supposed to get a free pass for her years and years of using anti-Semitic stereotypes?

Here’s an idea — let’s have one standard for everyone. It’s radical, I know.

Her response is always the same. It goes something like, ‘Hey, I didn’t know this was offensive. I’m learning. But here’s why I stand by what I said. Sorry if that offended you!‘ Maybe she should just do the #SorryNotSorry hashtag. It would be a little more honest.

She hasn’t listened and hasn’t learned a damned thing. She’s doubling down.

It was then reported that Omar was going to be speaking at a Yemen Emergency Dinner in Tampa on February 23 organized by Islamic Relief USA (IRUSA), an American branch of the organization Islamic Relief, which has chapters in 20 countries. Islamic Relief has been branded a terror financier by the governments of Israel and the United Arab Emirates. Many moderate Muslim leaders in the United States have also denounced Islamic Relief for providing financial aid ‘to terrorist sympathizers and enablers, including affiliates of Hamas, a foreign political group with documented evidence of supremacist views and Jew-hatred.‘

That’s not all. Another speaker that was scheduled is Yousef Abdallah who has openly supported violence against Jews.

At the dinner in Tampa, one of the other three featured speakers alongside Omar is IRUSA’s “East Zone Manager,” Yousef Abdallah, who on his social media accounts repeatedly has promoted violent anti-Semitism. For example, Abdallah praised as “beautiful” a story lauding a “resistance hero” whose work helped “kill more than 20 Jews” and “fire[d] rockets at Tel Aviv.”

Much of the reporting on IRUSA and Abdallah, thoroughly documented, comes from the Middle East Forum, a think tank most often associated with respected scholars Daniel Pipes, MEF’s founder, and Michael Rubin. The Clarion Project, led by analyst Ryan Mauro, likewise has denounced Islamic Relief for having “many documented links to terror funding — particularly Hamas — and the Muslim Brotherhood. It also is managed by prominent Islamist extremists.”

But the Jerusalem Post reports that Abdallah’s name was suddenly scrubbed from the website and Omar’s spokesman started posting on social media that the reports were inaccurate.

As media reports surfaced, however, Abdallah’s name was removed from publicity for the event. Then, a spokesman for the congresswoman, Jeremy Slevin, began posting on social media claiming the articles were inaccurate. “Yousef Abdallah will not be speaking or attending the event with Rep. Omar and was never scheduled to do so,” he wrote. “Please correct.”

The Post responded by sending Slevin copies of the original event itinerary from the Eventbrite website, as well as a screenshot of the original flyer that listed the two speakers. 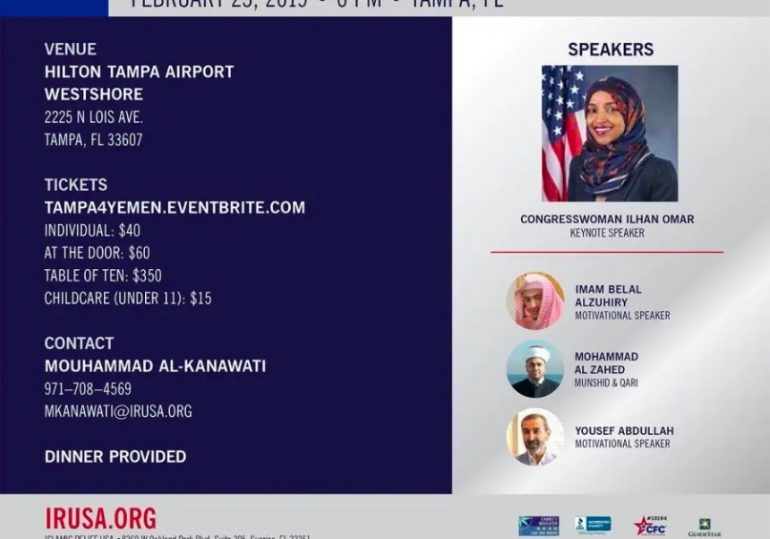 “He [Abdallah] was never confirmed to speak with the congresswoman,” Slevin replied in the name of the event organizers. “He will not even be in town then. The flyer being circulated is inaccurate and the current Eventbrite and flyer that are [now] up reflect the speakers at the event.”

Slevin did not answer the Post’s questions about the timing of the changes, or why Omar’s PR team failed to vet the flyers or the itinerary before their release, despite her high-profile governmental position. However, he “agreed” that the circumstances were strange.

Either the staff thought that all of the speakers were fine, or that is the pinnacle of incompetence. Maybe Omar should consider hiring some competent people.

The thing is, Omar has been doing this for years. It’s really nothing new.