What — has an ‘activist’ such as herself never actually heard of the ‘Streisand Effect’?

AOC is back to doing what she does best. Milking media attention to push a narrative.

Earlier in the month, she was milking the goodwill given to their favorite flavor making it to Washington.

When she took office, she put out a video thinking Republicans because — what — Republicans supposedly react to dancing the way vampires react to garlic …? She seemed pretty proud of herself, with this tweet anyway:

I hear the GOP thinks women dancing are scandalous.

Wait till they find out Congresswomen dance too! ????????

Have a great weekend everyone 🙂 pic.twitter.com/9y6ALOw4F6

She’s painting herself as a ‘poor victim’ and striking out at her oppressors. It’s almost as though she’s hoping we’ll forget about the gaffes and SNAFUs when she shot herself in the foot with that ever-so-mockable Green New Deal.

The rollout she and her team promptly lied about, blaming ‘Republicans’ for the ‘lies’ in it that her party was suddenly desperate to distance itself from.

You know, the parts about cow farts, and doing away with air travel, or (in particular) the paycheck that even people who don’t WANT to work could get.

She’s a Socialist. Even the Leftist VOX said so proudly when the radical left still thought it was ok to openly admit it. (Cited in our article: Venezuela: How The Left Is Failing The Freedom Test) But we’re not supposed to talk about the REAL ambitions of her project. Not even when she recently belonged to a group that called for the abolition of private industries of many products deemed ‘necessities’. (referenced in the link)

Here’s their darling lashing out at John LeFevre for tweeting about her.

The right has gotten increasingly desperate w/spreading targeted rumors about me lately.

Someone made up a meme that led to @snopes disproving this: https://t.co/M5ffXwvmtT

(Also, I had to live alone in my family’s apt after my dad died, so the eviction lie is especially bad) https://t.co/gJ8NYgenSR

Of course, when you’re a Democrat, ONE guy gets to be the voice of the ENTIRE Right, but when another fresh face of the Democrat Party tweets out something anti-Semitic, like this: 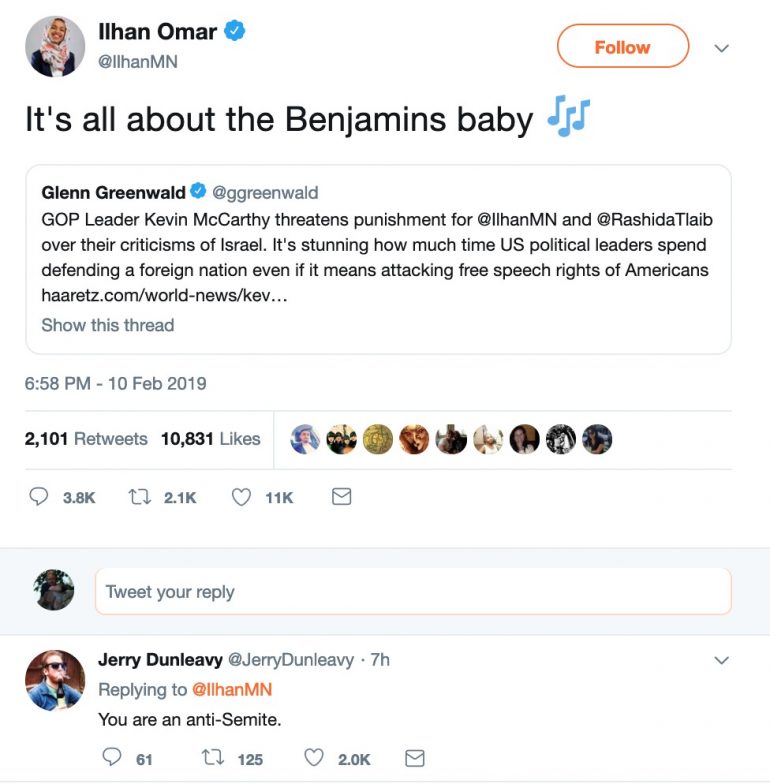 … SHE gets to be dismissed as — wait for it — NOT speaking for everyone.

You get to have it both ways when you’re a Democrat, you see. It’s one of the perks offered by our erstwhile ‘Free Press’ in Media(D).

Fortunately, there are still some people willing to ask tough questions. Not that we’re holding our breaths waiting for an answer.

Ocasio-Cortez often refers to Omar as her "sister"

Seeing as AOC saw nothing wrong with a nice chat with Jeremy Corbyn, she probably will NOT condemn Omar’s remarks.

But, let’s get back to She Guevera‘s injured bird routine…

This stuff is really sad. The GOP is so intellectually bankrupt that they no longer engage to debate issues in good faith, but instead seek to lie, distort, name-call, target, & destroy people/communities w any means possible.

It’s a virus and a race to the bottom.

Actually, that’s a lie. And a pretty pathetic one at that.

We here at ClashDaily saw that same tweet, but had no interest in retweeting it and turn it into a story. Of course now that SHE is retweeting it, it has become the story. See: Streisand effect.

We have no idea what her credit score is, nor do we really care.

But, as an aside, considering the enormous financial ignorance many of her public statements thus far it suggests a question worth pondering… should the credit score of people setting the NATION’s budget be of any concern to the electorate?

After all, Senator Shifty is gung-ho on digging into the financials of every Tom, Dick and Harry that’s ever shaken the President’s hand, right? Because it’s somehow of ‘National Interest’ and (of course) history has ZERO examples of the IRS ever being used as a political weapon? Not even against MLK, right?

Back to her tweets again.

Two (!) elected Republicans have been PHYSICALLY attacked by Democrats just since Trump’s election. One of them shot at, the other hospitalized while mowing his own damned lawn.

It’s pretty wild that the GOP can’t decide whether they’re going to run with the conspiracy theory that I’m secretly rich, or the exaggeration & mockery of my family’s struggle after my dad died during the financial crisis.

Instead, they decide to defy logic and run with both.

No… she’s getting mocked for being the political version of Drake.

She’s not some hard-luck story of a girl who came up from the mean streets.

She hopes we’ll forget that she carefully built her narrative around being a down-and-out girl from the rough side of town and freaked out when people fact-checked her.

Why do people think they can mess with Bronx women without getting roasted?

They act as though our borough hasn’t been perfecting the clapback game since the Sugarhill Gang 🤣 y’all just found it on Twitter https://t.co/pgxUU1BDJs

The weirdest part about this is how important it is to AOC that she be known as being from The Bronx. She doesn’t represent nearly as hard for where she’s actually from. Then she and her followers demand we not only accept but promulgate this lie. Just bizarre behavior all around

She can cry all she wants about how ‘mistreated’ she’s been. But from here, this looks like the desperate tweets of someone desperate to forget the one thing she REALLY can’t handle.

She unveiled her brain-child to the world… and the world laughed.