Normally celebrities are lauded for their innovative parenting styles and held as examples of what we the lowly masses should follow… but not this time.

That’s because Pink’s husband, former motocross racer, Carey Hart took 7-year old daughter Willow out to shoot and posted a video of their excursion on Instagram.

Hart posted the video on Wednesday with the caption, ‘Haven’t poked the parent police bear in a few days. Willz and I shooting the 22 rifle. She is getting pretty good. Can hit a 12 inch pie plate from 30 yards. Started her shooting at 3yrs old. For the record non of us hunt, just enjoy shooting for sport. I’m raising the kids with knowledge of fire arms, how to handle them, shoot them, store them, and avoid them in uneducated hands. #knowledgeispower‘

Haven’t poked the parent police bear in a few days. Willz and I shooting the 22 rifle. She is getting pretty good. Can hit a 12 inch pie plate from 30 yards. Started her shooting at 3yrs old. For the record non of us hunt, just enjoy shooting for sport. I’m raising the kids with knowledge of fire arms, how to handle them, shoot them, store them, and avoid them in uneducated hands. #knowledgeispower

That’s really gonna get the anti-2A crowd riled up. And, behold, it did. But our boy, Carey, didn’t back down! 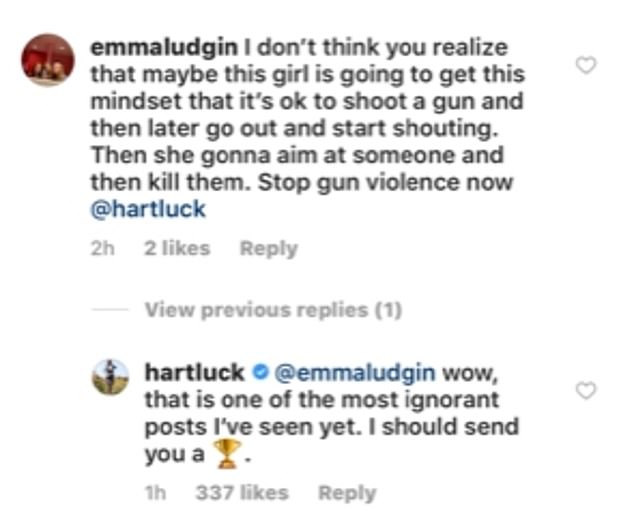 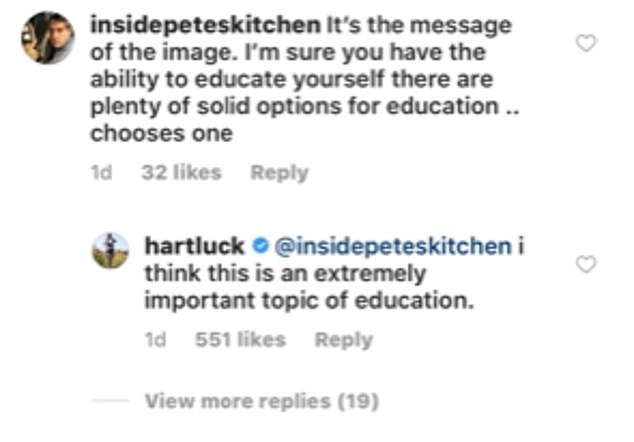 In the comments section on the video, Hart addressed the critics. One user wrote, “There is absolutely no reason why a three-year-old needs to be shooting a gun. It is just indoctrinating the toxic American culture that guns are somehow ‘cool’ and a ‘hobby.'”

Hart responded, “That is your opinion. I never slam people for speaking their opinion. I enjoy debate and shedding light on subjects that are sensitive like this. Now when you disrespect my country or ‘culture’ I feel I have every right to get nasty.”

He later added, “I think this is an extremely important topic of education,” noting that he also planned on purchasing a bow for his daughter later this year.

Another Instagram user said that Hart should be afraid of his daughter losing control of the weapon and shooting him in the face in error. 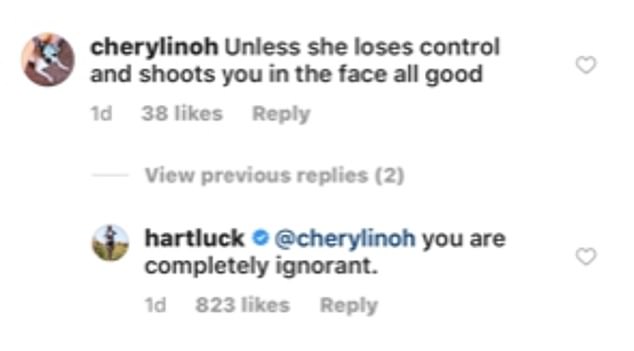 Hart literally said that he was educating his children on the proper handling of a firearm. He’s obviously ensuring that it’s age-appropriate. Watch that video and tell me again that he’s not teaching his daughter to handle a gun with care.

He did respond to the person who said he should be worried about Willow shooting him in the face accidentally.

In response to other users who saw Hart’s video as a negative, he cited his firm belief in upholding his Second Amendment rights.

Hart is a concealed carrier and has a Sig Saur that has been customized by Dark Alliance Firearms.

Thanks @dark_alliance_firearms for my new custom @sigsauerinc !!!! Did an awesome job on the engraving and cerakote. Wanted something a little more stream lined to conceal carry. As soon as this rain passes I’ll be able to fire a few rounds. Check them out for custom builds. #2ndAmendment #2A

He’s a big fan of the Second Amendment.

Now, we can question some of Hollywood’s weird parenting ideas, but this is not one of them.

It’s important to educate your kids about firearms, especially the safe handling, shooting, and storage. I absolutely love that Carey Hart is not just teaching his kids that, but also to avoid guns in uneducated hands. That point seemed to be missed by his many detractors, but it’s vital. That’s how kids really get hurt.

Let’s give some well-deserved ClashDaily kudus to Mr. Hart for doing a great job in this area of parenting.

Extremists Plotting to ‘Blow Up’ the Capitol During State of The Union
February 25th, 2021 Liberty Hub

Democrats Ask Biden To Give Up Nuclear Control (Or Is It That Trump’s Living In Their Heads?)
February 25th, 2021 The Lid