Have the Media(D) forgotten the reason he was invited there in the FIRST place?

Joshua Trump has had a rough ride.

So it was with Joshua Trump.

Guess what ‘issue’ he had difficulties with at school?

School life can be tough in the best of circumstances. But if, by some stroke of cruel luck, you happen to carry the same last name as the most vilified scapegoat and cartoon villain in all of Hollywood, music, news and social media — it’s going to be that much harder.

We covered his story in December.
DISGUSTING: Young Boy FORCED To Drop His Last Name ‘Trump’ Because Of Jack@sses At School

Long story short, he was pulled out of school for a year and homeschooled. Now that he’s in Middle school, they’re careful not to use his last name.

Trump invited the little guy to be among the guests at the State Of The Union, and he came.

But it WAS a stuffy political event…

And Joshua is an eleven-year-old boy.

To the surprise of nobody, he nodded off.

And ABC CLOBBERED him over it.

Because the kid hadn’t been through enough already.

WTF ABC? Did you do stories about all the grown ass men and women from the left and right who also appeared to be sleeping? How is this not public harassment of a minor? Disgusting. https://t.co/jiWgjq95S7

And so did some other Blue-check jackasses.

And their hangers-on took the occasion for (yet another) cheap shot against President Trump. 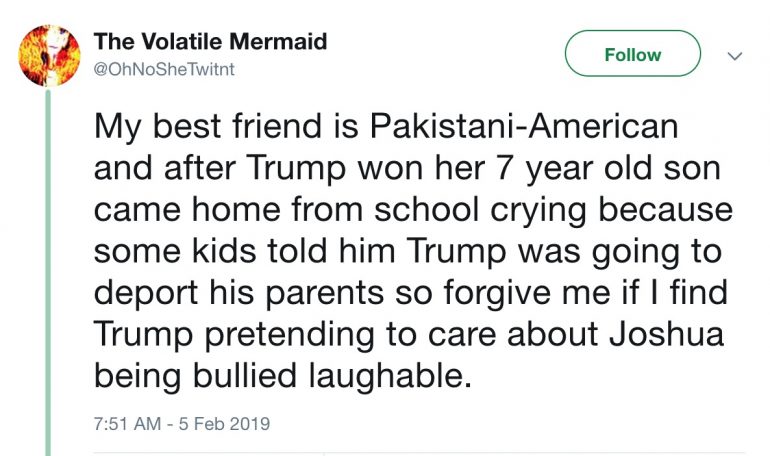 Uh, sure. That story doesn’t sound made-to-order at all. No really, it probably happened.

After all, they can’t ALL be hoaxes, right?

This went through a few layers before being posted here. Disappointed all around guys.

The 11 yr old brought to the #SOTU after being bullied at school falls asleep during long ass speech so…let's take his photo, select/edit photo, then publish the photo.

It’s like the Left are trying to corner the market on everything that sucks.

If they want to corner the market on things that suck, let them have it.

We’re too busy with what’s awesome.

So, too, is our President.