How quick they are to jump on the stories that ‘prove’ that Trump supporters are racist.

Wouldn’t it be nice to have journalists that get the facts first and then report those facts instead of pushing their own conclusions?

Well, that’s no longer the world that we live in.

The repeated claim by our POTUS DJT that the Media(D) is ‘fake news’ is absolutely true. What fuels this position is that they’re not open about their biases and they shape the story to fit their left-leaning worldview.

Here at ClashDaily, we’re pretty clear about who we are, but the chuckleheads over at CNN, ABC, NBC, and CBS claim to be ‘neutral reporters’ when they are (for the most part,) nothing but a bunch of leftist hacks.

They were quick to jump on the Jussie Smollett ‘attack’ without questioning it because it fit their narrative. They were also quick to label the ‘smirking’ teen from Covington High School as racist which, as it turns out, the Media(D) got completely backward.

Many conservatives immediately said that some of the facts in the Smollett incident were a little too convenient, but also said that if it was true, that kind of racism and bigotry against someone who is gay is completely unacceptable. Here at ClashDaily, we heard the rumors swirling, but didn’t want to jump in until the facts were known — mostly because it just didn’t add up. There has also been a spate of hoax ‘hate crimes’ ever since Trump became President.

We did question whether it was a good use of Chicago Police resources to investigate the 30-second alleged attack on Smollett while they only solve 17 percent of their murder cases — and murder is sort of a problem in Chicago.

Our Media(D) betters, not so much. They ran with it.

Watch this compilation of the Media(D) pushing the hoax hate crime as though it’s indicative of what life is like in America in 2019:

A VICIOUS, RACIST, HOMOPHOBIC ATTACK…
Can you say #FakeNews #DemocratsAreDestroyingAmerica

People had a hard time believing that ‘something like this could happen in 2019’ — uh, yeah. That’s because it didn’t.

Remember, this is the same Media(D) that demands that we ‘wait for all the facts’ to call something a terror attack when an admitted Islamist shouts ‘Allahu Akbar’ and murders people in public.

Now that the Media(D) has been revealed as a bunch of frauds, and the Smollett story appears to be completely staged, they’re trying to shift the blame for some of the salacious details of the story.

Watch this genius from Vox says that the Media(D) didn’t push the ‘MAGA country’ line on CNN:

Vox’s Liz Plank on “This is MAGA country” quote: “The people who were repeating that quote were not news outlets…It was repeated by, sure, people who maybe had good intentions of wanting to spread the story…We can’t confuse celebrity tweets with the media and the press. pic.twitter.com/ayGHYmxYk8

That’s completely untrue. One of the original published articles was TMZ, which includes the claim that the attackers shouted, ‘This is MAGA country’ and Chicago Police confirmed that detail of the story with TMZ.

Jussie Smollett went on ABC News and tearfully said that he was angry that people didn’t believe him:

Look at those crocodile tears! I guess he figured that he was a good enough actor to pull this off. The problem is, that the truth always comes out. Smollet isn’t even good at keeping his story straight… bro even lied about his freaking Subway order! He said he wanted a salad, but he ordered a sub which Chicago police say he was still carrying and was visible in surveillance video after the attack.

Watch as Kmele Foster (typo in the tweet) says that the Media(D) pushed the idea that there was a rise in ‘hate crimes’ under Trump before establishing that there is an actual trend:

Camille Foster has a confused look as Plank says “there is real evidence of people who have done the crimes that cite that the president has inspired them. It’s a trend.”

Foster: “I think this part of the problem. We’re establishing the trend whether or not it’s there.” pic.twitter.com/JuJGIcrOuy

Journalists haven’t learned a damned thing after the rush to judgment of the Covington kids.

This morning, Stelter said that it was mostly ‘celebrities’, friends of Smollett, and random people on Twitter that pushed the salacious parts of the story, and journalists were ‘careful’ in their reporting. You can see from the above compilation video that he’s completely out to lunch on this.

.@brianstelter this morning: “There was a rush to judgment, I think it was mostly in the celebrity press and among activists and among Twitter people. I think it was a really careful reporting by news organizations. But it all gets lumped in together at the end of the day…” pic.twitter.com/165Dn3HI7p

It’s Smollett’s responsibility for making up the facts, but the Media(D) and Democratic Presidential hopefuls shouldn’t be responsible for running with it?

And run they did.

Here are a few journos and ‘news’ organizations on Twitter that weren’t so ‘careful’ with their handling of the story. 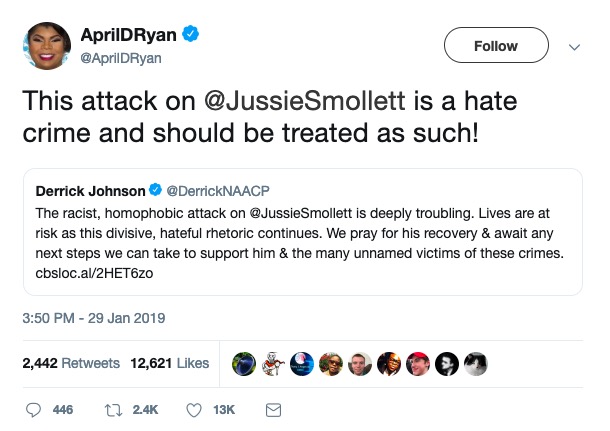 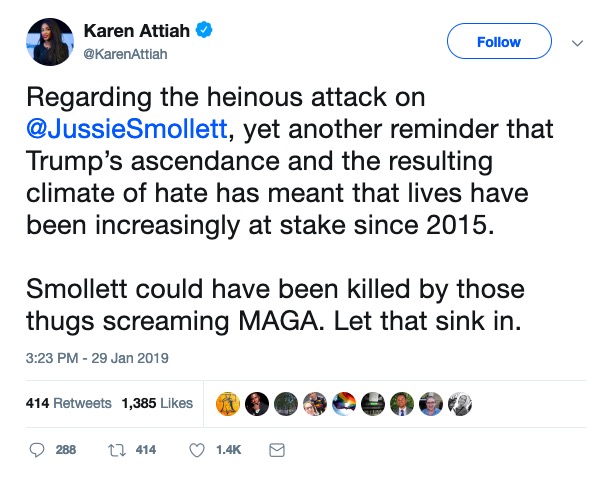 A producer for MSNBC and the Associated Press, Brian Latimer: 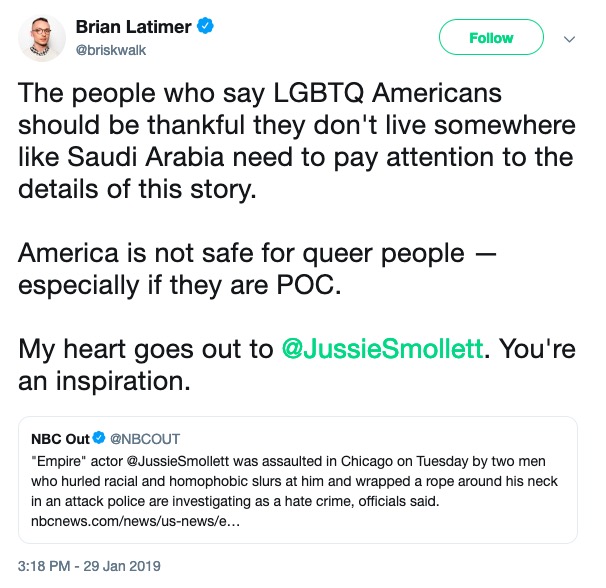 Jussie Smollett was called homophobic and racist things. They put rope around him, POURED BLEACH on him, beat him, and said, “This is MAGA country.”

These are the people our president is emboldening. This is what that red hat stands for. https://t.co/0VleA1zSTu

Lisa Fung is an editor for the Los Angeles Times: 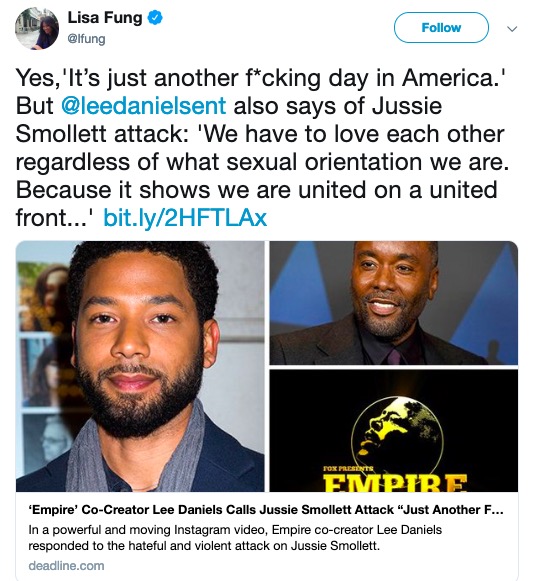 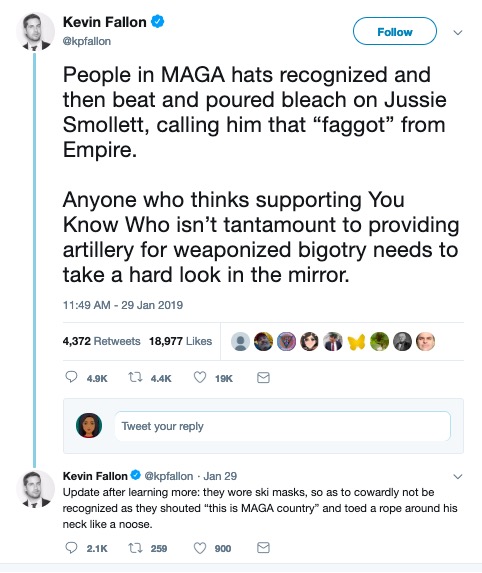 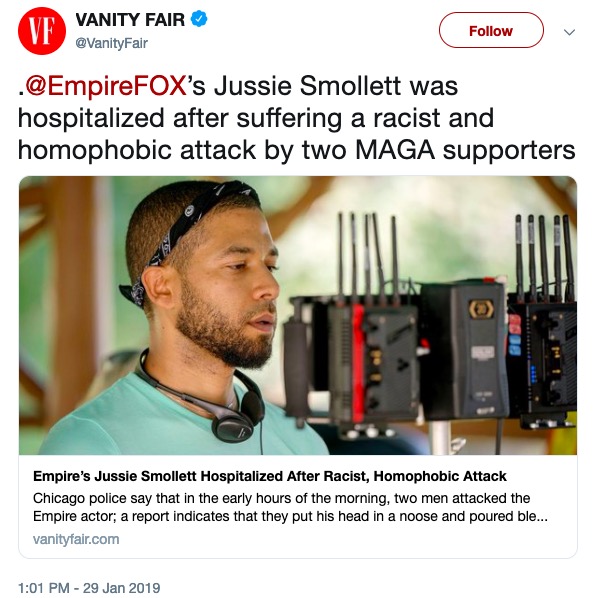 Vox’s Liz Plank that chuckled nervously on Stelter’s ‘Reliable Sources’ when she was saying that no ‘real journalists’ pushed the Smollett story wasn’t so careful in the early days of the story breaking:

Here are the three #JussieSmollett tweets that I can find that @feministabulous RT'd in the early days of the reporting on the incident: pic.twitter.com/PnwVFBh5xj

Is this just a CYA (Cover Your Ass) move by a CNN hack? Yeah, I think maybe it is.

Thanks for admitting that you’re not one of those ‘Reliable Sources’, Brian.

Another Woman Drops Allegations About Cuomo Making Unwanted Sexual Advances — And This Time There Are Pictures
March 2nd, 2021 The Political Cowboy

A month in, there are still no plans for Biden’s first formal press conference
March 2nd, 2021 Liberty Unyielding