Do they braid each other’s hair and make friendship bracelets, too?

What happens when Maeve Reston, CNN’s ‘National Political Reporter’ goes on the campaign trail with Sen. Kamala Harris(D-CA)? Well, they apparently head into a boutique with the other political journos and find the gaudiest jacket imaginable for the Presidential hopeful to try on. Then they all giggle as Harris puts on a coat that resembles a reject from an off-off-Broadway rendition of Joseph and the Amazing Technicolor Dreamcoat.

When the campaign trail takes you to a boutique, and @MaeveReston spots a great sequined jacket for @KamalaHarris to try on. #campaignfashionreport pic.twitter.com/38bYJKqjRI

Donny Osmond’s coat looks much better than Kamala’s if you ask me.

.@KamalaHarris trying this amazing rainbow coat (to me this screams Mardi Gras coat!), inspired by an inquiry from @MaeveReston of #campaignfashionreport fame. pic.twitter.com/iAvcYN9l5i

Amazing coat? Yes, amazing that anyone would make such a hideous thing.

Here is Maeve Reston bragging about her shopping trip with Kamala and how she forced her new BFF into putting on that monstrosity.

We kind of forced @kamalaharris to try on this awesome oversized rainbow sequin jacket … She snapped it up. @alivitali perfectly named it as “the Mardi Gras Jacket” #2020 #SouthCarolina #CampaignFashionReport pic.twitter.com/2G0NFRkKL6

It looks like Maeve Reston is taking that ‘covering’ Kamala Harris on the campaign trail a little too literally. The ‘political reporter’ is making sure to document the Campaign Fashion Report on Instagram. 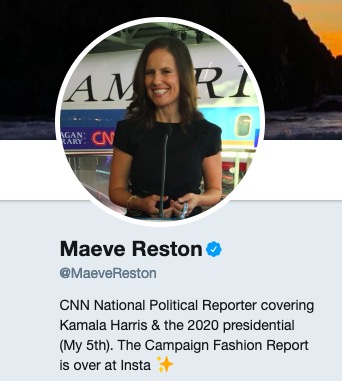 That giggling good time doesn’t show any scintilla of bias, does it?

Here is why it’s not a good idea for Kamala Harris to listen to the journalists blowing sunshine up her butt:

Now Maeve just needs to find her a hat to go with it.

Now, all we need is for Kamala to wear that hideous thing during a debate in the primaries. It’ll show America what Republicans have known for some time now — she has some serious issues with her judgment.