And that’s not all! Will the activists turn bigot and cry ‘foul’? Or will they start rethinking the logic of their activism?

He’s an Oxford Graduate, a rapper an entrepreneur and what was the other thing?

But not this day. On THIS day, he’s decided he’s a chick, and wants to set some records.

Under today’s spurious social-justice logic, who’s to say he’ wrong without the real risk of being keel-hauled and thrown off of social media, into the outer darkness. You know — “Lived experience” and all that.

Here’s Zuby in his own words:

“I keep hearing about how biological men don’t have any physical strength advantage over women in 2019,” Zuby tweeted, referring to a series of recent articles insisting that male-to-female transgender individuals have “female penises,” and that there’s no inherent gender differences between men and women that should keep male-to-female transgender individuals from competing against natural-born women in athletic events.

“So watch me DESTROY the British Women’s deadlift record without trying.”

Don’t worry. Zuby assured his viewers that everything was fine because, while he was deadlifting, he personally identified as a woman, making him eligible to challenge the women’s record.
Source: DailyWire

Before you congratulate him — her, sorry — on that new record… there’s more to the story.

Zuby felt so good with that one record, he (she?) knocked off a few other records.

Now that the records have been set, he’s back to identifying as a dude.

This is an act of violence.

Naturally. He DID make it clear that he was identifying as a woman WHILE challenging those records.

It’s technically impossible for me NOT to piss off a large chunk of my following by saying anything honest. ????

We’ll have some good conversations.

Unless people are ready to concede that there’s a very specific reason we have a SEPARATE women’s category because their top athletes are nowhere near parity to the top male athletes in terms of strength, speed and stamina.

The point of the separate event in the first place was to PROTECT women from unfair competition. It seems strange that the supposed defenders of women are working so hard to undo those protections. We’ve been making that same point for a long time. 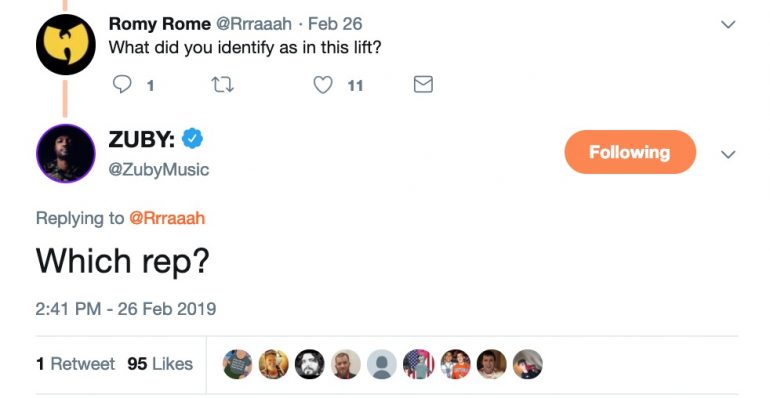 What’s the point, then, of having gender-separated events at all? Why not just let everyone compete together in one big group and may the best man win?

My preferred pronoun is 'The Great One'.

Those who deny my mission are ageist and ignorant. https://t.co/aPDle89Pps

This guy ‘gets’ what it will take to challenge the insanity and truly change the culture.

No wonder his music sounds so different from the angry schlock many people think of when someone mentions rap.

It’s because he’s a man of substance.