Veritas turned their citizen-journalist sights on Facebook. They landed themselves an informant talking about an off-the-books practice called ‘deboosting’.

If Congress is truly serious about getting answers about Social Media malpractice, Danny Ben-David is one of several FB employees named here that may find themselves answering some probing questions… preferably under oath.

We have more evidence than ever that Facebook has been abusing its legal status and protection from litigation as a platform that providers that exercise editorial control over their content do not share.

How they can claim they haven’t been exercising editorial control over (specifically Conservative) content with so much evidence to the contrary? Not just the time spent in Facebook Jail or the sites they’ve systematically closed down, either — ours included, but active suppression of reach.

In fact, just this yesterday, another example hit the news:
Facebook & Instagram BAN Tommy Robinson For Telling The TRUTH About Islam

So it’s not just the profile pics and the bogus accounts that are fake:
REPORT: 50% Of Facebook’s Accounts Are TOTAL BS

A Veritas whistleblower who had, herself worked for Facebook, offered us documented examples, even the people who have paid money for advertising through Facebook have been ‘deboosted’ if they have the wrong politics.

According to the insider, the documents revealed a routine suppression of the distribution of conservative Facebook pages. The technical action she repeatedly saw, and for which Project Veritas was provided documentation, was labeled ActionDeboostLiveDistribution. Said the insider, “I would see [this term] appear on several different conservative pages. I first noticed it with an account that I can’t remember, but I remember once I started looking at it, I also saw it on Mike Cernovich’s page, saw it on Steven Crowder’s page, as well as the Daily Caller’s page.”

Conservative commentator Steven Crowder’s page had been suppressed before in April 2016, and Crowder told Project Veritas they settled a dispute related to the issue with Facebook out of court. Asked for comment on this story, Steven Crowder’s attorney Bill Richmond said:

“Louder With Crowder is investigating the allegations of concealed stream throttling by Facebook. The accusations are deeply troubling given the previously settled dispute with Facebook uncovered by Gizmodo.com, which found the show was targeted by Facebook workers with secret audience restrictions on political grounds alongside other prominent conservative voices.”
Source: ProjectVeritas

You can read the entirety of the report there.

The AI term “Sigma” in question went live in 2017 — right around the time of their infamous ‘algorithm change’ that led to an enormous drop in traffic in right-of-center news sites. The official use of that AI program was to spot self-harm and suicide. It wasn’t.

Young Turks and Colin Kaepernick’s pages have no such ‘deboosting’.

Does it seem a little too convenient?

Around the 12 minute mark in the video, they even specifically reference controlling content ‘before important elections’.

That fits neatly with the long-term plan put forward by the Clinton-partisans like David Brock in Media Matters, doesn’t it?

And what is an example of the problematic ‘Troll Behavior’ they are trying to suppress? 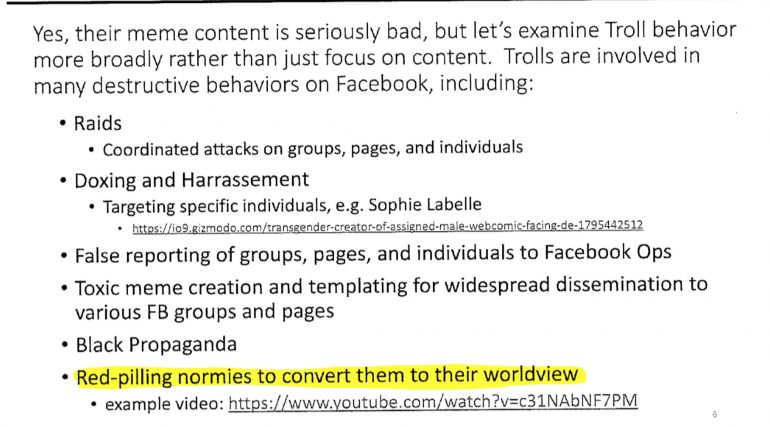 When you punch in the highlighted youtube code, this comes up:

Oooooh. Thanks for all that ‘protection’ from some really dangerous stuff.

Intelligent, informed Right-of-center political opinion shared by a young ‘ethnic’ woman who’s turned her back on the radical left?

On second thought, that’s precisely the sort of thing SOME people WOULD consider dangerous, isn’t it? At least, a partisan might see it that way.

Does anyone seriously believe Zuckerberg spoke the truth, the whole truth and nothing but the truth when he answered those questions before Congress?

His next visit should probably be to be under oath.

In any event, it’s long past time to strip away the legal protections afforded to someone who is ‘merely a platform’. ‘Facistbook’ is anything but.