Sen. Harris seemed to be confused when confronted by a reporter about a tweet condemning the attack on Smollett that increasingly looks like a hoax staged by the actor.

It looks like somebody forgot that she was supposed to wait for all the facts to come out before rushing to judgment.

Actually, this is totally within her nature.

During the confirmation hearing of Justice Brett Kavanaugh, she was grandstanding during her turn to question him even asking if men could be friends with women while hurting other women. When it was Harris’s turn to question Professor Blasey Ford, she was incredibly sympathetic to her and even said, ‘I believe you.’ Before that, however, she blanketed Facebook with a whopping 3,600 ads to fundraise off of the #WeBelieveSurvivors zombies the day before Kavanaugh and Professor Blasey Ford testified before the Senate Judiciary Committee.

Jumping to conclusions is what she does, apparently.

She did it with Christine Blasey Ford and again with Jussie Smollett.

An awkward position for a former District Attorney, isn’t it?

The news had barely broken when Sen. Harris rushed to Twitter make a statement about the alleged hatred displayed in Trump’s America. The tweet stated that the attack was an example of a ‘modern day lynching’ and that ‘we must confront this kind of hate’. 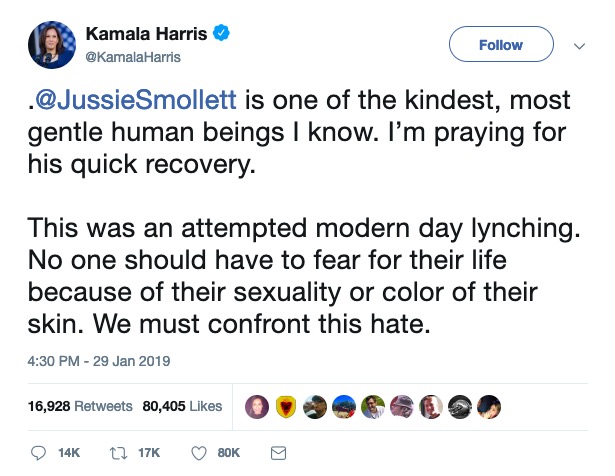 Now, Sen. Harris is being called to answer for her rush to judgment in the apparent Smollett hoax, but she’s decided to play dumb.

During a visit to a bookstore in Concord, New Hampshire, the senator from California was asked by a reporter to comment on a tweet made on January 29 about Mr Smollett’s alleged assault which she called ‘a modern day lynching.’

The alleged attack saw two men hurl racist and homophobic abuse at the actor, who is black and openly gay, as he returned to his Chicago apartment.

However nearly a month from the star’s alleged attack, law enforcement sources in Chicago told CNN that Mr Smollett may have paid two stooges to carry out the assault.
Source: Daily Mail

When queried on this prime example of a That Didn’t Age Well Tweet, Sen. Harris first turned to look at the people behind her (possibly her staffers) and then stumbled through her answer.

This is so disingenuous. Either she A) Didn’t know what her team had tweeted on her Twitter account or B) Didn’t want to answer for rushing to judgment.

It obviously can’t be Option A, because her tweet indicated that she personally knows Smollett. Ergo, it must be Option B.

HARRIS: Which tweet? What tweet? OK, so, I will say this about that case. I think that the facts are still unfolding, and, I’m very concerned about obviously, the initial, allegation that he made about what might have happened. And it’s something we should all take seriously whenever anyone alleges that kind of behavior, but there should be an investigation.

Watch her stammer through:

Kamala Harris starts stammering when asked about her tweet in which she asserted Jussie Smollett incident was a "modern day lynching". pic.twitter.com/R9Te5SZf1t

Oh, so now she wants to wait for the facts after rushing to judgment.

It’s even possible that she was exploiting the Smollett attack’s impeccable timing to draw attention to the anti-lynching bill that she had been working on for some time with the only other two black Senators, Cory Booker(D-NJ) and Tim Scott(R-SC). [To be fair to Sen. Harris, Sen. Booker went all-in and cited the Smollett incident on the Senate floor.]

Harris was quick to believe the victim even in the face of a far too convenient narrative because it fit with her view of America and her ideological enemies on the right.

Think about that for a second — she sees her political foes as racist bigots who would wait out at 2 am on the streets of Chicago during the polar vortex armed with a bottle of bleach and a rope in the hopes that they would find a gay, black celebrity on a show that I’m sure is must-see TV amongst the MAGA crowd in ‘flyover’ America to terrorize and mock-lynch him.

Why did so many on the left jump to believe that the attack was true? The same reason that they rushed to judgment against the MAGA-hat wearing, smirking Covington teen — victimhood is celebrated.

As a warrior for identity politics, Harris had to believe Smollett, he was a gay, black man who was attacked by vicious MAGA bigots, who, (of course,) must have been white. Who are you going to believe, some white guy who isn’t oppressed, or a black, gay activist from not one but two historically marginalized communities? That’s a no-brainer for the intersectional crowd.

This is precisely why the identity politics embraced by Harris, Booker, Warren, AOC, and their leftist cohorts, is completely stupid and incredibly destructive. It doesn’t look at people as individuals.

Andy Ngo, a contributor to Quillette, wrote a really fantastic piece on this very thing in the National Review:

Jussie Smollett’s hoax is symptomatic of America’s illness. Because of the mainstreaming of academia’s victimhood culture, we are now in a place where we place more value on being a victim than on being heroic, charitable, or even kind. Victims or victim groups high on intersectionality points are supposed to be coveted, treated with child gloves, and believed unreservedly. Their “lived experience” gives them infinite wisdom. Those who urge caution are treated as bigots.

Outside of the rare prosecution for faking a hate crime, the incentives for being a victim — real or imagined — are endless.

Anyone not blinded by bias or panic should have been skeptical of Smollett’s story from the beginning. He openly harbors an intense hatred for Donald Trump and his supporters, going so far as comparing them to Klansmen. That his alleged attackers perfectly fit this description should have raised eyebrows across the political spectrum. The cartoony, screenplay-villain portrayal of white Trump supporters was outrageously comical. But to insulated urban progressives who have little to no experience interacting with conservatives, a Trump supporter may as well be synonymous with evil.
Source: National Review

Nobody on the left wants to question the victim even if it’s pretty obvious that the story has more holes than Swiss cheese.

This is why we need to grill all of these Dems that came busting out of the gate to paint Trump supporters as racist bigots — it exposes their own bigotry.