You could say he’s ‘underwhelmed’ by both AOC’s ideas and her personal example in going green.

The "world as it is" has the option of taking the subway rather than a taxi. option of Amtrak rather than plane, option of opening windows rather than A/C. You're just a garden-variety hypocrite like the others. And you have ZERO expertise at any of the things you pretend to know

When she tried to rationalize the choices that got her called out as an environmental hypocrite in the NY Post, he nailed her on that, too. 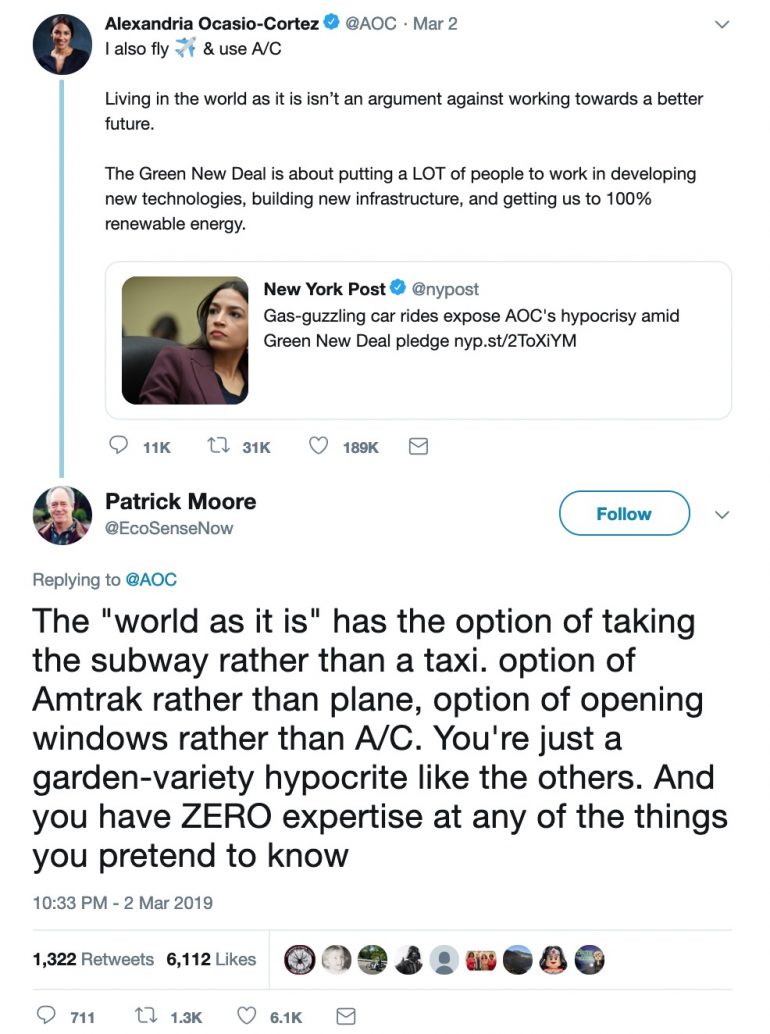 His timeline’s a riot.

Here is a sampling:

The problem with @AOC is she doesn't know whether or not she knows what she is talking about. Makes it harder to think straight.

Isn't @AOC a bit young to talk about WW2? It was Hell & more than 60 million died. It's her @GND that would be worse than WW2. Imagine no fuel for cars, trucks, tractors, combines, harvesters, power-plants, ships, aircraft, etc. Transport of people & goods would grind to a halt. https://t.co/nXhdlK4Tsa

Just like Al Gore and Dicaprio, and about a million other effete elites. Do as I say, not as I do. https://t.co/VPbo8qbBTG

Which sort of "cleaner renewable energy" do you refer to? Wind and solar? Happy to be without power for a week or two in the winter?
These are not scare tactics. We can't produce and deliver food to 8 billion people with horses.
Give me your magic formula. https://t.co/o4dhkdpSi5

This is a key point, unintended consequences of rash actions based on flawed analysis. @AOC probably never thought about basic food production as it is always there for her in the supermarket. She didn't know she was prescribing mass death but at least now she has been advised. https://t.co/POFwUWm9mN

Good photo of @AOC after being told she's not really in charge, or The Boss. pic.twitter.com/Z039IxFyt4

Not too often someone comes along that really deserves mocking. https://t.co/6MP3xYFPGy

As the kids say these days, ‘Oof’.

Someone needs to call a crime scene clean up crew after this takedown.