When it was a Jewish Temple in Pittsburg, Democrats loudly denounced antisemitic violence. How about now?

If anyone is wondering why there is a ‘Jexodus’ movement (Jewish Exodus) OUT of the Democrat party, it isn’t hard to tell.

Democrats care very deeply about antisemitism — so long as they can lay that charge at someone else’s feet. (And nobody mentions their good buddy Louis Farrakhan.)

But ever since the Democrat’s Freshman class joined Congress, the dynamics have changed. Some of the three highest-profile women in the party are happy to say very politically incorrect things about Israel. Including repeating racist tropes.

And when they get called out for it, rather than apologize, they go on offence, pointing fingers at other people.

But when Pelosi tried to make a formal statement condemning antisemitism, the young upstarts yanked her leash and brought her to heel. — A shocking display of just how much sway these women have within their own party. Raucous Caucus: Pelosi Storms Out Of Closed-Door Meeting Over Omar’s Anti-Semitism

It has not gone unnoticed — even among elected Democrats.

Remember, for context, that while Democrats have been freely offensive to Jewish people, Trump and his policies have been described by Bibi in the most glowing of terms:

“And I’ve met many friends of Israel in this office. But as I said in the other room, just now, in a day of history, we have never had a greater friend than President Trump.” — White House

If this were another Temple in Pittsburgh, the reaction and denunciation would be swift and severe. But this is not Pittsburgh. This is Israel itself… do the Democrats still care?

A home was destroyed by Hamas rockets. Notice the crib among the wreckage:

As you wake up this morning, take a minute to think about how Israelis have been waking up over the past two days… pic.twitter.com/6FOpgysG0k

Rockets were not the only form of attack they were willing to use:

If you still have doubts about their intentions from the video, they attached a sign to the IEDs that read "death to Israel." They're stating it loud and clear. #StopHamas pic.twitter.com/f5BOhHXStJ

What about the children?

We’ve got Jewish children and Palestinian children in this story.

This is Imri, a two year old living near Gaza. When Hamas fires rockets indiscriminately into Israel, they target Imri and children just like him. Listen to him tell his father what he feels when he hears air-raid sirens: pic.twitter.com/CPrs0BDkHU

These 8 year old children were forced to cross into Israel with a knife. We returned them safely to Gaza. pic.twitter.com/IWRYjWWUnZ

Whatever you may think of the regional politics, Hamas has a very different idea of what ‘protests’ look like than the West does:

Take a look at the Facebook profile of the "Sons of Zouari"- a Hamas unit that violently attacks Israel, throwing grenades and explosives. They boasted on their page that today's riot will be laden with explosives. They are. pic.twitter.com/MMmwjZ5Eiv

HAPPENING NOW: 40,000 violent rioters in Gaza, some armed with knives, explosives, and grenades, are attempting to breach Israel's border and reach Israeli families on the other side of the fence. If our soldiers weren't there, they could. pic.twitter.com/Zy61KkbiYb 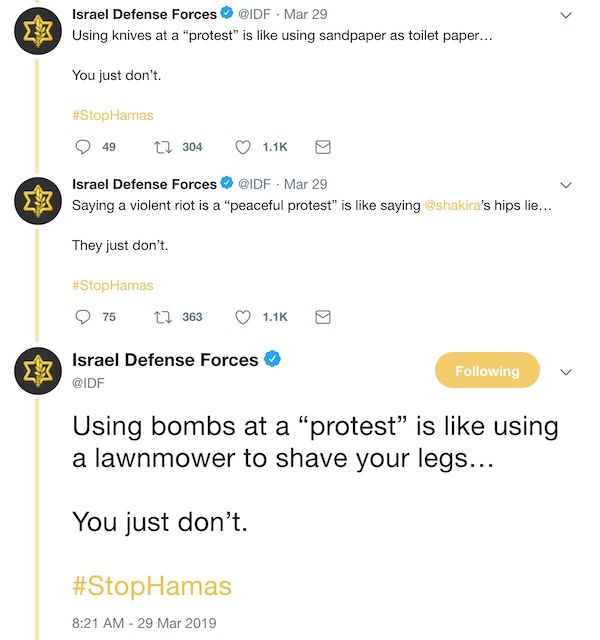 The video that Hamas doesn’t want you to see this weekend: #StopHamas pic.twitter.com/8tW8Ap7IgN

Here’s the reality of the situation — To Hamas, and Iran, these people in Gaza are nothing more than cannon fodder in a war they would love to provoke with Israel.

Israel has shown restraint, in part, because they do not want to be drawn into a proxy war like what Iran has orchestrated in other parts of the Middle East.

Remember, Iran has Hezbollah, a terror group that grew into a Billion-dollar a year criminal cartel while Obama was busy trying to kiss Iran’s ass. Obama Loves Our Enemies: Damning New 411 Emerges About Obama & Hezbollah That’ll Blow Your Socks Off

Politico reported that known terrorists could have been apprehended, but weren’t. That tons of drugs bound for America were not stopped. That a longstanding ‘Operation Cassandra’ could have seriously curtailed these operations, but Obama stopped them, lest it hurt his deal with Iran.

Now those trails have gone cold and the investigation has been disbanded. Hamas is an arms dealer with connections to Assad (supplier of chemical weapons), Madero and Putin, and they’ve got IEDs that they were ‘ripping M1 Abrams tanks in half’.

If you think the organizers and financiers behind these ‘protests’ have ‘peace’ as their final objective, you just haven’t been listening.

We already know what they want, they chant it all the time: Dear CNN: Racist Bigot Louis Farrakhan Leads Chant Of ‘Death To America’ In Iran — Is That News?

“Winter” is coming for the West, and it is going to be apocalyptic
June 28th, 2022 DC Clothesline