“Congratulations, you have made an enemy of one of the most powerful organizations on the planet.” — Planned Parenthood.

She was a rising star. Abby Johnson was one of the youngest Planned Parenthood clinic directors in the nation. Until one fateful day, she saw something that turned her world upside down.

Here’s the trailer for the movie that a coordinated effort is trying to silence.

In theaters everywhere March 29. #Unplanned is the true story of one woman’s journey of transformation. Abby Johnson was one of the youngest Planned Parenthood clinic directors in the nation.Until the day she saw something that changed everything. https://t.co/FQ4aXWBgEh pic.twitter.com/iEClpfBLLP

When they tried to advertise their opening weekend, almost nobody was willing to run the trailer.

Pure Flix, the distributor behind the box office hit God’s Not Dead and other movies aimed a Christians, opens the movie in 1,000 theaters today, but outside of the Fox News Channel, every other mainstream television outlet has declined to air the ad.

Lifetime, for example, told the film’s marketers that they declined to air the commercial due to the “sensitive nature of the film,” the ad buyers tell The Hollywood Reporter. The marketers though, note that the network — which is owned by A&E Networks, a joint venture of Walt Disney and Hearst Communications — previously promoted an interview with Scarlett Johansson where she pitches Planned Parenthood.

The Travel Channel, Cooking Channel, HGTV and Food Network, each of which are owned by Discovery, also refused to sell ad time for Unplanned due to the “sensitive nature” of the movie, say those who tried buying air time.

Other networks that refused to advertise the movie include the Hallmark Channel and USA Network, the latter of which is owned by NBCUniversal.

“We were looking to spend money, but they didn’t want to get involved,” said John Sullivan, a producer of Unplanned. THR reached out to all of the networks; Lifetime declined to comment while the rest did not respond.
Source: Hollywood Reporter

People found other creative ways to generate some attention, though. Like the dress Villa wore at the premiere:

“I told Johnson I wanted to do a custom dress for the premiere because I wanted her to be in on it, because this is her film, her story, it’s very personal. She wrote it and produced it. So we came up with some options,” said Villa.

“She went on to make an offhand remark and said, ‘or we could always do ‘Fuck Planned Parenthood,'” Villa added. “It’s controversial enough to get people’s attention and it also is the underlying message of the film.”

Noting that her gown had a nod to Barbie, she continued, “Yes, I believe in women’s health-care clinics, but abortion is not health care and Planned Parenthood has been pushing that and indoctrinating girls with pink and girliness. So that’s why my dress is hot pink and very girly.”
Source: HollywoodReporter 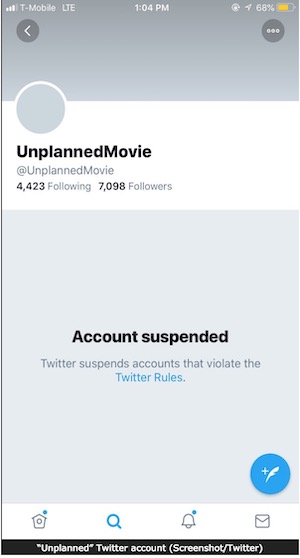 “Twitter just suspended @UnplannedMovie during the weekend of its theatrical release.@jack why are they suspended?” Rose tweeted. “You’ve banned both my & @LiveAction account from all promotions simply bc we’re pro-life. Have you banned this account because it challenges your pro-abortion bias?”
Source: DailyCaller

But all their obstruction and suppression ultimately backfired.

Probably a coordinated reporting that tripped an automatic flag over volume. Their system is too easy to game.

Thank you @DailyCaller and everyone else that was quick to respond to @Twitter suspending our Unplanned account.
Let's continue to spread the word until the world recognizes this movie. Pulling back the veil of planned parenthood and exposing the truth.https://t.co/6zZoat9XOL

And the exposure gained them a HUGE boost in followers.

At the time of this writing, here’s a screenshot of their Twitter stats: 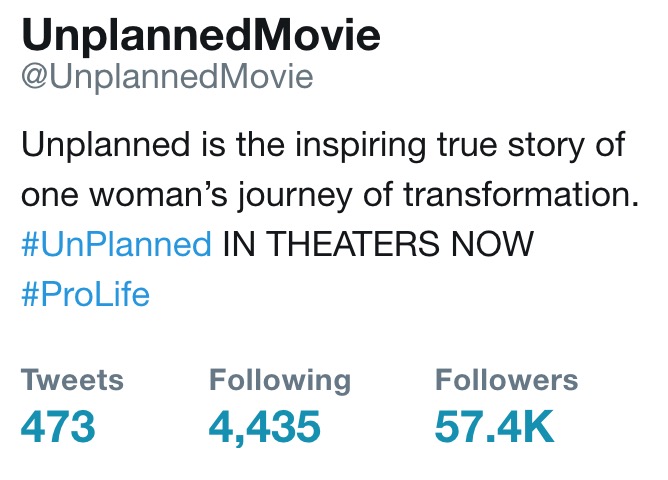 But that’s not all. They’ve already had themselves a ‘surprising’ turnout on opening weekend.

Scroll all the way down for some ‘bonus content’ about Planned Parenthood. It would be a ‘real shame’ that video were to go viral.

We set the record straight. pic.twitter.com/NNiPOqqxk9