After all the defamation Lawsuits WaPo and the Covington Kids accusers are dealing with, she’s still pulling stunts like this?

We knew she wanted to ‘change the channel’ about Ilhan Omar’s obvious and repeated anti-semitism, and she wanted some way to weaponize it against here political rivals, but this is straight up dishonest.

It was so bad that her own party was drafting a bill to condemn anti-semitism, and specifically the trope Omar had been raising.

The House bill condemning Steve King didn’t need some ‘wider context’, and named him by name in January. But they’re soft-shoeing this one, already talking about adding talk about Islamophobia in the language, which is beyond ironic considering the person whose recurring anti-semitic remarks raised this issue in the first place is herself Muslim.

Alexandria Occasio-Cortez’s use of ‘[unintelligible]’ to clip out words that were quite clear twists a very situation-specific statement into an outright accusation of racism.

“I always thought that if more good people had concealed carry permits,then we could end these Muslims before they [unintelligible].”

This was just this weekend at CPAC, the conference attended by the President and members, to 1000s.

Where’s the resolution against Islamophobia? https://t.co/eXA9F1fezI

The whole thing is a lie.

She clipped out the preceding minute of video that would have provided context.

This, as Paul Harvey used to say, is ‘the rest of the story’.

I thought @AOC was just dumb but she is a liar too. She claims this was @CPAC last week when it was actually in 2015 the day after the deadly CA attacks by radical Muslims (“those” Muslims I referenced) She also deleted the last part of my quote “before they walk in and kill us”. https://t.co/lIw4V4BaVj

By now, she ought to know better than to retweet anything by ‘Bishop Swan’ without fact-checking them first. Let’s break it down.

No, it was not ‘just this weekend’ — it was 2015. When this speech was given, she was not an elected representative, she was still tending bar — or whatever she was doing with herself back then.

No, it was not an eager desire to slaugter Muslims, it was the impulse to defend unsuspecting and defenseless American citizens against armed Jihadists who killed 14 and seriously wounded 22 people, in a speech given one day after the slaughter. Does THAT context change anything?

Note the defensive response of ‘before they walk in and kill us’, or — as the lying new boss of the Democrats so dishonestly phrased it — ‘[unintelligible]’.

No, you don’t need to throw some wider issue into a denunciation of anti-Semitism to give cover to your Freshman Buddy. If you want to write something else to decry ‘Islamophobia’ after the fact, knock yourself out. Nancy would probably love that.

But we all know what you’re really doing; it’s just another leftist non-apology apology.

The broader context is here (H/t DailyWire for the transcription).

I wanted to mention last night Becky and were watching the Fox News reports on the shootings in California and we were so touched by Mike Madden, the first responder, did anybody see that last night? He was the police officer who was the first responder to the terrible murders at the community center there and he told a story about no matter how well you’re prepared in your training for to deal with something like that, that there’s just no way when you when you walk in and you see the carnage and you smell the smell of gunpowder and it’s just something that you can never be prepared for.

So we contacted his family or his office after that report to see if he had any sons or daughters who were looking for place to attend college we offered to help with the scholarships. We also are trying to contact the victim who had six children who was killed in that in that carnage and it just blows my mind when I see the President of the United States say that the answer to circumstances like that is more gun control.

I mean if the people, if some of those people in that community center have had what I’ve got in my back pocket right now…I’ve always thought if more if more good people had concealed carry permits then we could end those Muslims before they walked in and killed them.

She’s an activist, and has learned well the ways of Clinton. Even when you’re demonstrably wrong, attack your attackers. Question their questions. Accuse the accusers.

This is hardly the only place she’s using this line of attack.

Where was the concern last week when 26 Dems voted for a GOP amendment to expand ICE powers rooted in the racist + false trope that Latino immigrants are more dangerous than US born citizens? https://t.co/KNzRDWJH4z

But, speaking of her dishonesty this brings up something we’d almost forgotten about in the hurricane of stupid gaffes she’s given us in the two months since she’s been sworn in. (Has it only been two months?) 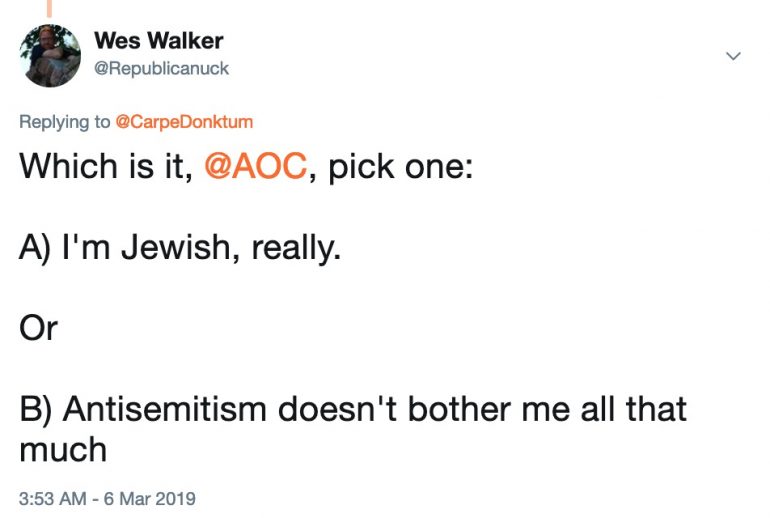 Alexandria Ocasio-Cortez retweets a known supporter of the Popular Front for the Liberation of Palestine (PFLP), a US State Department designated terror organization. https://t.co/os5AwPsDvH