Mueller is learning that the adoration of Tinseltown is a fickle thing. He’s gone from hero to zero in five seconds flat.

This is exactly the same process that turned Comey from a goat into a saint — only it’s in reverse.

Comey was ‘he who shall not be named’ after Trump won the election in 2016. He was the scapegoat on whom so many had pinned Hillary’s loss. But when he illegally leaked documents to set up Trump for the Mueller probe, all was forgiven.

After all — this was the slam dunk that would lead to impeachment, right?

So, will Hollywood be happy to learn that Trump was not — as the NYTimes and Colbert among others openly insinuated — betraying America as Putin’s gay lover?

After all — learning that our institutions and our Presidency have NOT been corrupted by foreign influences should be a good thing, right? Are they celebrating the intact integrity of America’s institutions?

For example — just before the report came out, Chelsea Handler tweeted this:

If I’m being completely honest, I am very sexually attracted to Robert Mueller. I know it’s not meant to be, but that doesn’t mean I won’t hang a poster of him above my bed.

Now that Trump’s been cleared, her libido has dropped off:

I will admit my feelings for Mueller are conflicted now and my sexual attraction to him is in peril, but I still believe there is a lot more to come, and we must all march in the streets if we don’t see that report.

In case nobody’s told you, Chelsea — having your libido tied so closely to who can swing a hatchet at your political opposition makes you look cheap, even by Hollywood standards.

But she was hardly alone in her crazed histrionics. 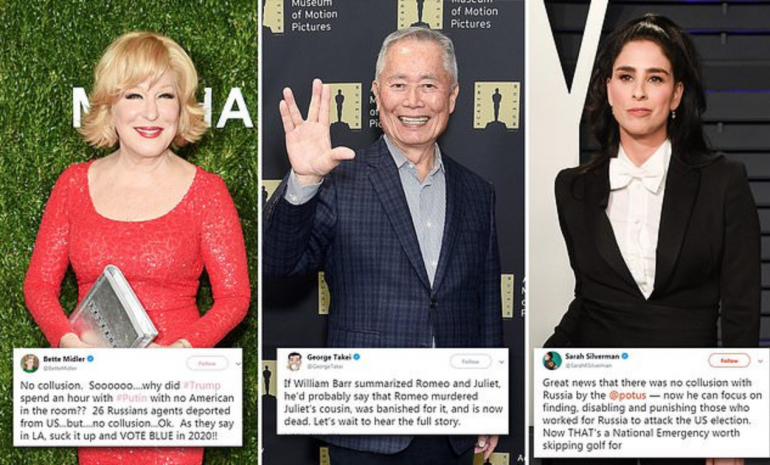 Please let's not rush to judgment on the Mueller report. Let's wait to see what Robert De Niro and Alysa Milano have to say.

the summary is irrelevant – only the full report matters #ReleaseTheEntireReport

Cusack must be off his meds…

Well, if there was nothing in the report why won’t they just release it?

If the report fully exonerated him or his family, he’d have it all out in seconds. Wouldn’t he?

Well…. we paid for it so we should be able to read it!

The same is true of the FISA reports you fought so damned hard to keep redacted, isn’t it?

Robert De Niro is unfortunately unavailable for comment, although, scholar that he is, it’s fair to say his response would probably be just two syllables long.

We hoped Obama’s plans would fail — not because we wanted to see him personally fail, but because we thought his ideas would be detrimental to the country, the economy and our freedoms.

That’s how poisoned these Hollywood types have become in their partisanship. Then again, after seeing Chelsea’s creepy tweet, you would hardly need that explained, do you?

Of course, even Hollywood has its exceptions. For example:

Democrats react to #MuellerReport the way they accepted the 2016 election… pic.twitter.com/K12TWWkzcD

One tweet that best sums up the various ways the left is desperately spinning this so far:

Barr is not telling the whole story.
Mueller was compromised by Russia.
Trump bribed Mueller.
Barr bullied Mueller for Trump.
Well, Trump didn't do THIS but you know he did SOMETHING …

Can't decide if this is exhausting or hilarious.

Medical Doctors: “You Are Being Played” – “The SARS-C0v2 Virus Does Not Exist”
February 24th, 2021 DC Dirty Laundry