Leftists have insisted that the number of people entering the United States illegally is decreasing. They’re wrong. Here’s the 411…

New numbers released by the Department of Homeland Security has shown that there is a significant rise in the number of families crossing the southern U.S. border illegally than we have seen before.

Even the Media(D) can no longer ignore it.

Arrests of families crossing the U.S.-Mexico border illegally in the past five months hit a record, prompting the chief of Customs and Border Protection to say the system is at “the breaking point.”

From October through February, border agents arrested 136,150 people traveling in families at the southern border. Those figures exceeded the record for a full, 12-month period; 107,212 people were arrested during the federal fiscal year that ended in September.

More than 66,400 people were arrested in February, making it the busiest month since President Trump took office and the busiest February since 2008.

They included a handy graph: 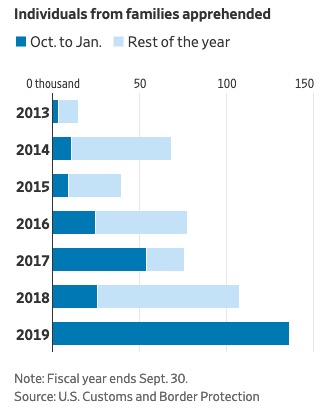 The Wall Street Journal made sure to mention that the numbers are increasing despite President Trump’s tough stance on illegal immigration.

The numbers were the sharpest evidence yet that, despite Mr. Trump’s efforts to crack down on illegal immigration, the flow of migrants is only growing.

“This situation is not sustainable,” Customs and Border Protection Commissioner Kevin McAleenan said while releasing the numbers Tuesday. “The system is well beyond capacity and remains at the breaking point.”

Gee, WSJ, could it be the Abolish ICE and ‘Open Borders’ Democrats that can’t shut their pie-holes with their #Resist blather that is emboldening people to take the risky and dangerous journey with their children?

Methinks it may be so.

It’s funny how Democrats, who don’t seem to think that America is so great but that all other countries are wonderful, are quick to say that the illegal border crossers are just ‘looking for a better life’ in the good ol’ U.S. of A. Interesting. A better life than what? I thought they all lived in paradise compared to the U.S. which the left constantly paints as a misogynistic, xenophobic, white supremacist nation filled with bigots and income inequality.

I’m old enough to remember when the woke folks on the left were up in arms that President Trump may have said the phrase ‘sh*thole country’, and yet, isn’t that exactly what they’re implying that these poor, helpless migrants are fleeing?

The leftist suggestion that we should open wide the gates for all of the economic migrants of the world simply isn’t a feasible one. Our immigration system just can’t handle it. We have limited capacity with both manpower and facilities, and we can’t continue to push legal immigrants to the back of the line for the tens of thousands of illegal immigrants that arrive at the southern border.

Oh, and by the way, the status of the northern triangle countries of Honduras, El Salvador, and Guatemala haven’t changed all that much, so there isn’t an urgent reason to seek asylum in the U.S. due to increased violence or political turmoil in their home countries.

At the current pace, the number of families arrested at the border could double or even triple the record by September.

Maureen Meyer, Mexico and migrant rights director for the Washington Office on Latin America, a human-rights advocacy group in Washington, said there is no sign that the pace is slowing.

“Nothing in the Northern Triangle countries has changed,” Ms. Meyer said, referring to Honduras, El Salvador and Guatemala.

Of course, there could be another reason that the Dems are keen on bustin’ open the borders.

Watch Sen. Lindsey ‘Grahambo’ Graham(R-SC) explain that the number of illegal migrants arriving per year is like adding a new Congressional District to the country annually.

Spot on from @LindseyGrahamSC.

There is a massive number of illegal immigrants trying to cross our border on a daily basis.

It’s like adding a congressional district of illegal immigrants every year.pic.twitter.com/A6ZE02P0dz

They’ve made ridiculous (and racist) claims that requiring Voter I.D. is somehow racist, they’ve opposed the push to ask citizenship questions on the census, and generally subvert the democratic process.

This is why we need the wall, and it seems as though President Trump is correct that it’s a national emergency.