Is this the behavior of a party that thinks they’ve got Trump on the ropes?

If they thought they were coasting toward an easy victory in 2020, they wouldn’t need to turn the shrill levels up to eleven. The fact that they have, points to desperation.

After throwing everything they had at Trump in the first two years, he still emerged from the fire unscathed.

Trump’s approval numbers are just fine, thank you very much. And the Russian Collusion is getting NO traction. 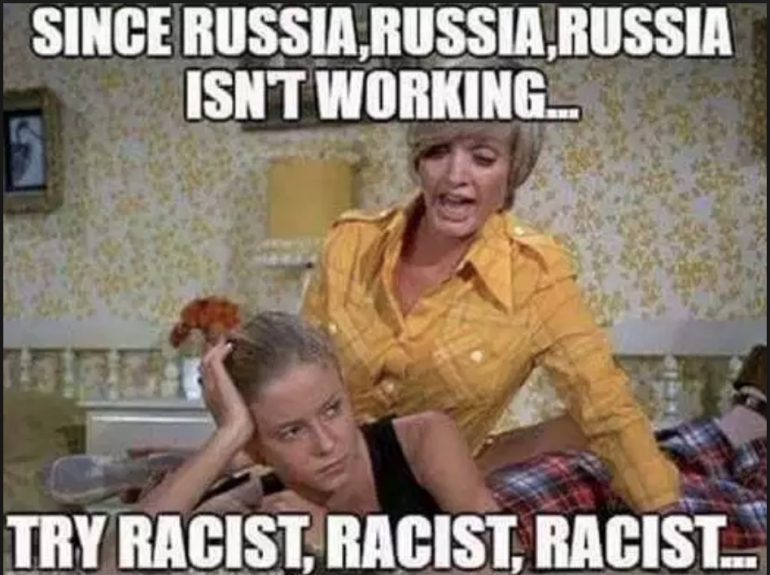 It hasn’t just failed, his poll numbers are actually trending up, and the Democrats and their allies in the media are “beside themselves.” As evidence, Rush cued up a clip from Chuck Todd’s “Meet the Press” on Sunday featuring NBC News/Wall Street Journal pollster Bill McInturff answering the question: “Does that mean that the Michael Cohen hearing, while a significant one as it was, does it mean, A, that the country has made up their mind, or, B, that the partisans have made up their mind? What does it all mean?”

MCINTURFF: I hate to say this, since you do a weekly show, but one of the main things you learn as a pollster is, please, our country sort of comes to a steady state, and it’s very hard to change. And the longer term trend is, the country sort of said they’ve sort of decided what they think about Russia, and until there’s a heck of a lot more facts, this country is nowhere near where it needs to be to think you could impeach a president.

“Did you hear that?” Limbaugh exclaimed. “This country’s nowhere near where it needs to be to impeach a president, and that is because the approval number is at 46%. Did you hear that? These guys, the Never Trumpers out there, the Drive-By Media, the Democrat Party, they are wallowing in some of the most noteworthy failure that they can recall. Folks, they’ve given it everything they’ve got. They have fired every weapon. They’ve used every bit of ammo that they’ve always used. And they’ve done it repeatedly. They have done it multiple times a day, every day, for over two years. And Trump’s numbers are now creeping up in their polls. He’s over 50% in the Rasmussen poll.”
Source: DailyWire

How can they get enough support in the House and Senate for impeachment if Trump hasn’t yet been painted as a bad guy?

They don’t have any real shot at impeaching him before 2020. So, why would they be working so hard — with document requests on 81 people and organizations connected to the President — if they can’t impeach him before 2020?

“Now, obviously the Democrats running for president fully expect to win or they wouldn’t be getting into the race, most of them,” Rush said. “But I think a lot of people, if they can come to grips with things, expect Trump to be reelected. After the CPAC speech on Saturday, after these polls that come out and show his approval numbers are ticking up… The economy is going great guns, manufacturing and homebuilding are reaching new highs — things that were plummeting under Obama — and the Democrats are starting to step in it…”

“If you look and if you have the ability to look objectively, all signs indicate that Trump is going to be reelected. This business of impeachment that they’re going…? No doubt they are. But not for between now and 2020. This is to prep impeachment for 2021 and beyond,” said Limbaugh. “That’s what they’re doing. That’s why these massive documents requests — and they’re only just now getting started.”

That is to say… in his SECOND term.