John Wayne is the latest target on the Left’s perpetual Wheel Of Outrage.

Should we really be surprised that they’d have a particular hate for an icon like John Wayne?

Seriously. He’s like Kryptonite to them. Look at some of his quotes, from his films and real life h/t Quotes:

I don’t want ever to appear in a film that would embarrass a viewer. A man can take his wife, mother, and his daughter to one of my movies and never be ashamed or embarrassed for going.

“A horse is a horse, it ain´t make a difference what color it is”

“Out here a man settles his own problems”

“I won’t be wronged. I won’t be insulted. I won’t be laid a-hand on. I don’t do these things to other people, and I require the same from the.” The Shootist.

“I’ve always followed my father’s advice he told me, first to always keep my word and, second, to never insult anybody unintentionally. If I insult you, you can be goddamn sure I intend to. And, third, he told me not to go around looking for trouble.”

“Very few of the so-called liberals are open-minded…. They shout you down and won’t let you speak if you disagree with them.”

Now the endlessly-offended activists want to erase him from history. Starting with the airport named after him.

Last week, a columnist for the Los Angeles Times suggested that those concerned about Wayne’s legacy should take the “cancellation” one step further by removing his name from the Orange County airport in order to demonstrate that those who hold problematic opinions — even those expressed in a bygone era where they were considered acceptable — will be stripped of mentions in history.

“It’s long past the time that Wayne’s name should come down,” Michael Hiltzik writes.

…But Hiltzik isn’t so much concerned with how or why Wayne’s name has remained on the airport all these decades, just that it no longer “represents” modern Orange County.

“Orange County today is such an economically and ethnically diverse community that it’s hard to justify asking any member of that community to board planes at an airport named after an outspoken racist and homophobe, with his strutting statue occupying a central niche in front of the concourse,” he writes.

Is it because he’s the racist and homophobe they claim him to be?

We covered the story of that objection when it first surfaced here:
UNREAL: John Wayne Is Now The Focus Of The Left’s RAGE – Here’s The 411

Or is the real problem that he was an outspoken Republican from history — a point specifically mentioned in Hiltzik’s article — and they need any positive representation of Republicans scrubbed from history.

It’s kind of like how the Soviets renamed St. Petersburg to Petrograd and then Leningrad, and how the Turks converted the world’s largest Cathedral — the Hagia Sophia — to a mosque immediately after putting Constantinople (later Istanbul) to the sword.

We’re dealing with ideologues, and the simplest explanation of why they are doing this is “this is their proof of cultural conquest.”

Our Big Dawg, Doug Giles, has immortalized ‘The Duke’ as Rooster Cogburn. The original painting has been sold, but you can get still get yourself a copy. 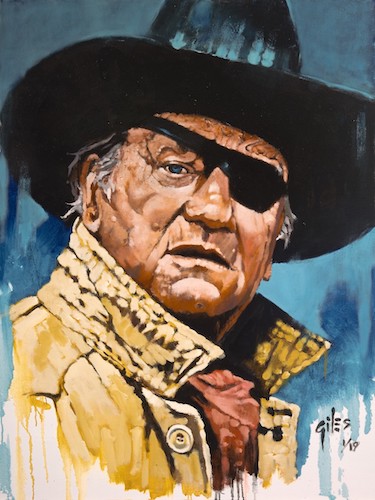