Even when doing the right thing, advocates give him the finger. Did anyone scold Obama for the same things they’re supposedly angry at Trump about?

Whatever your opinion on the morality of two dudes getting busy, you’d be hard-pressed to find anyone in the West calling for them to be sent to the gallows, or it’s modern equivalent — let alone finding a movement calling for that.

Religious and political groups are free to cross swords on the morality of different sexual value systems — and often do — but good luck finding anyone who will call for their imprisonment or execution.

It’s easy to take for granted that everyone shares our ‘tolerant’ thinking. They do not. One of the foreign policy issues that Trump is standing behind is the worldwide standard that people no longer face execution for holding — and living according to — a minority view on sexual ethics in their home country.

The Trump administration is launching a global campaign to end the criminalization of homosexuality in dozens of nations where it’s still illegal to be gay, U.S. officials tell NBC News, a bid aimed in part at denouncing Iran over its human rights record.

U.S. Ambassador to Germany Richard Grenell, the highest-profile openly gay person in the Trump administration, is leading the effort, which kicks off Tuesday evening in Berlin. The U.S. embassy is flying in LGBT activists from across Europe for a strategy dinner to plan to push for decriminalization in places that still outlaw homosexuality — mostly concentrated in the Middle East, Africa and the Caribbean.

“It is concerning that, in the 21st century, some 70 countries continue to have laws that criminalize LGBTI status or conduct,” said a U.S. official involved in organizing the event.
Source: NBC

Were the activists happy?

Hey, are they EVER happy when the Right is concerned?

Sarah Kate Ellis, President and CEO of GLAAD, told Fox News that the move was little more than window-dressing for an administration that marginalizes people.

“This looks like just another attempt by the Trump administration to cherry-pick and cover-up what is a horrible record of targeting marginalized people, including the LGBTQ community,” said Sarah Kate Ellis.

The Trump administration pushed to decriminalize homosexuality following the case of a 31-year-old Iranian man who was hanged by authorities for homosexual activity.
Source: DailyWire

They conveniently forget that several prominent appointees are part of ‘the community’.

Here is Mike Pence swearing in Richard Grenell with Grenell’s husband, Matthew Lashey by his side: 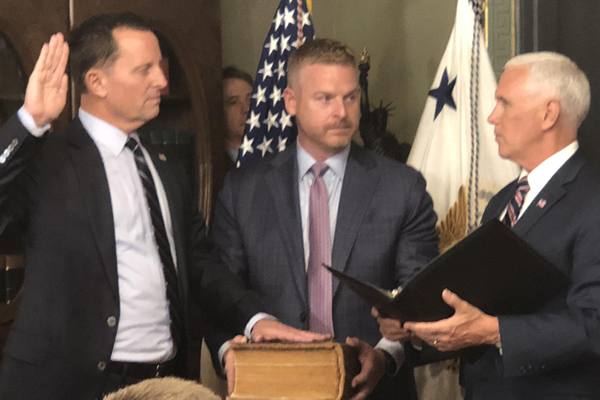 Flashback to July 2016 when these gay voters saw no problem with supporting Trump:

He swore in Ambassador Richard Grenell and his husband just fine.

Stop projecting your own bigotry onto other people. ???? https://t.co/cay799Ysa2

We have the first married gay ambassador to a major country.
Trump appointed a gay federal judge.
He honored a married gay cop.
No LGBT person has lost a single right fought for in the last 30 years.
LGBT celebrated a huge number of LGBT candidates who won elections this year. https://t.co/Q4YxokIsHn

We didn’t hear a peep of complaint from the LGBT mouthpieces when the Democrats were blocking every one of Trump’s appointments for as long as they could, including some from ‘The Community’.

As of late last month, 129 Trump nominees are awaiting Senate confirmation, according to news reports.

They include Richard Grenell, who was nominated by President Trump ambassador to Germany in September.
Source: Newsmax

That quote was written in APRIL of 2018, well into Trump’s SECOND year.

Blocking a homosexual Ambassador to an important country? That’s fine, so long as it fits the broader Democrat agenda.

It’s almost like they decide to hate everything Trump does BEFORE they learn the details, and then look for reasons to call it bad after the fact, doesn’t it?

Weird that the #Resist crowd would ever do anything that looked like kneejerk opposition, isn’t it?