Leftists trying to guilt-trip the political Right into silence for objecting to the statements and policies of elected officials need to take a hard look in the mirror.

They are getting a backlash for things one of their ‘media darlings’ has said to get herself in hot water. The ‘blood on their hands’ line they’ve been throwing against Republicans is pretty rich.

If you want to talk about real ‘blood on their hands’, let’s look at how anti-hunting leftists piled on Melania Capitan for her hunting photos.

A female hunter has been found dead after apparently committing suicide weeks after she was reportedly threatened on social media by animal rights activists.

Melania Capitan, 27, was a well-known blogger and hunter with thousands of online followers.

She rose to fame due to her posts in which she explained hunting tactics as well as showing glimpses into her every day life.
Source: DailyMail

Hearing news of the suicide, the Left didn’t show sorrow for the loss of human life. They cheered the ruination of a hated enemy… like they did in Mogadishu during showings of Black Hawk Down.

Thousands of Somalis have flocked to cinemas in Mogadishu for the opening night of Black Hawk Down, the war blockbuster based on the shooting down of two US Blackhawk helicopters in Somalia in 1993.

Residents of the capital formed long queues outside more than a dozen cinema halls, jostling for the hottest ticket in town.

But they were watching pirated copies of the film and applauded when the helicopters were shot down. Source: BBC

BIG game hunter has revealed she received over 1000 hate messages in an HOUR when Cecil the lion was shot and once had a bounty of £40,000 on her head.

Speaking in the week that huntress Melania Capitan was found dead in a suspected suicide, after being targeted online, American Olivia Nalos Opre has opened up about the abuse and death threats she had suffered.

The mum-of-four told The Sun Online: “I’ve had £40,000 ($50,000) bounty on my head with my home address posted and constant abuse and threats. Source: GirlsJustWannaHaveGuns

Since Republicans are NOT calling for or cheering the deaths of others, let’s take that ‘blood on your hands’ rhetoric down a notch, eh Democrats? Just because you’ve got your panties in a twist over being exposed yet again for statements offensive to ordinary American citizens, don’t go hiding behind the victim card. You picked this fight, so you don’t get to duck accountability for it.

Ilhan Omar sparked yet another controversy when she opened her yap about 9/11 in a way that smacked of enormous disrespect to those who perished or lost loved ones on that day.

Ilhan Omar — one of the new faces of the Democrat party — has an image problem. It has something to do with her recurring comments that disparage America and Israel, but treat those hostile to America — including some would-be ISIS recruits and CAIR — with a light touch.

Is it any wonder that her dismissive reference to 9/11 while painting CAIR as riding to the defense of the real victims of 9/11 — Muslims — was not taken well?

We’ll skip the part about her lying about where CAIR came from — links to Terrorist group Hamas, for example, or the fact that it was founded in 1994, not ‘in response to’ 9/11. And in case you think Hamas is totes kewl…

The Palestinian Islamist group Hamas on Monday dropped its longstanding call for Israel’s destruction, but said it still rejected the country’s right to exist and backs “armed struggle” against it. — Reuters

Why such a long lead up to hitting Omar’s nasty remarks about 9/11? To put that ‘victim card’ she’s about to play in its proper context, so we can call it out for the bulls**t smokescreen it is.

First Member of Congress to ever describe terrorists who killed thousands of Americans on 9/11 as “some people who did something”.

1. I never called you un-American.

2. I did not incite any violence against you.

3. You described an act of terrorism on American soil that killed thousands of innocent lives as “some people did something.”

It’s still unbelievable, as is your response here. https://t.co/SsfWYepOS1

Just so we are clear on basic notions of reality:

When someone calls out a public official for things they said, it is not endangering their life or inciting violence.

Claiming otherwise is just an attempt to silence your critics.

And lest we think it’s only white people and Republican who are taking issue with what she’s said, here’s the Imam of Peace who regularly calls out Islamic Extremists, and has testified about it before Australian Parliament.

He explained exactly what the spin doctors are doing to ‘reclaim the narrative’ and Gaslight the American public.

When Ilhan Omar expresses herself honeslty,

1. The media says it was taken out of context.

2. Pelosi says Ilhan has a different way of speaking English.

He slapped WaPo around with the truth for awhile…

It wasn’t taken out of context. https://t.co/QeiGF8jh89

It looks like your biggest problem in life isn’t opening a beer bottle but the fact that you cannot differentiate between a Muslim and an Islamist. In your “Native” language, a Muslim is 1/1024 Islamist. https://t.co/tGZv6camHP

He even took AOC to the woodshed over her pretense of being offended.

You are so bright you make the sun jealous. Only you could figure out a way to use the Holocaust to defend an anti-semite who doesn’t even believe in the Holocaust.

Reminds me of your Green New Deal that takes 10 years to establish despite “the world ending in 12 years.” https://t.co/JHJ5gwZbGf

If they REALLY want to talk about ‘blood on your hands’ — how about we look into the actual documented acts of violence… (as opposed to hyped-up Smollett-style hoaxes) against Trump supporters.

A small portion of the liberal physical attacks on Trump supporters. Size 7 font. 17”x22” piece of paper. @AOC @IlhanMN @JulianCastro @ewarren Anyone care to condemn and call for an end to this trash? pic.twitter.com/GHED7lE0C1

Or if you want to get serious in talking about actual blood on REAL hands, and who should be held accountable for it… we could always have the conversation about why this… 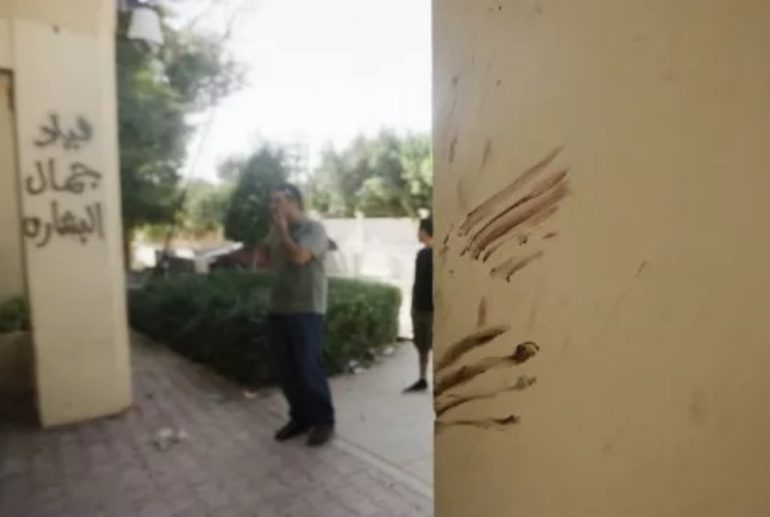 …resulted in the midnight arrest of some random American YouTuber.